Meditation Monday – Who Protects the Vulnerable?

I have been walking through Advent against a backdrop of horror at the fires devastating large portions of Australia. Friends and relatives in Sydney are wearing respirators to filter out the toxic smoke. Schools are cancelling outdoor sports. Koalas are burning probably to the point of extinction. And the pall of smoke is seen as far away as South America.

Who will protect this country I love I wonder? I so admire the fire fighters, many of them volunteers who risk their lives daily to try and bring the flames under control. Even the embers can be deadly. They can travel up to 30 miles on the wind and start a new fire. Such backbreaking work and without them the situation would be far worse.

Mary waited for the birth of her baby as a very vulnerable expectant mother as I talked about last week. The violence of Roman occupation must have been very real for her. The possible violence of her own culture who stoned adulterous women must have been even more real. Who protected her? Who made sure that she was safe throughout her pregnancy and the days after Jesus birth? 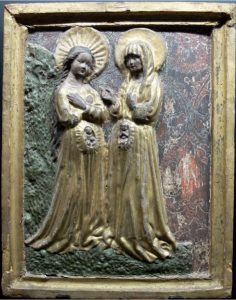 First there was Elizabeth. I really think that she was Mary’s safe person to visit after she found out she was pregnant. But more than anyone there was Joseph. I talked about him in my post last year Is Joseph the Unsung Hero of the Advent Story. I thin that my changing emphasis on Joseph has been so important for me this year that I thought I decided just to repeat a lot of that post this year. I hope you don’t mind.

According to New Testament theologian Kenneth Bailey, we misinterpret Matthew 1:20 “As he considered this, an angel of the Lord appeared to him in a dream. “Joseph, son of David,” the angel said, “do not be afraid to take Mary as your wife. For the child within her was conceived by the Holy Spirit”  He says “he considered this” should be translated “he became angry” and planned not to marry her. Not an unexpected reaction for a righteous man who finds his betrothed is pregnant by another”man”.

The amazing thing is that Joseph changed his mind because of a dream. How easily he could have ignored the angel. His acceptance of Mary and the baby she carried had consequences not just for her reputation but for his too. From the viewpoint of those around either the child was his and he was not quite as just and righteous as they previously thought or the child was someone else’s and he was a fool to accept Mary. He would have been” just” in condoning her stoning. Yet he stood by her. What courage it must have taken to stand against the culture of his day.

In his cameo appearance, Matthew presents Joseph as a human being of remarkable spiritual stature. He possessed the boldness, daring, courage and strength of character to stand up against his entire community and take Mary as his wife. He did so in spite of the forces that no doubt wanted her stoned. His vision of justice stayed his hand. In short he was able to reprocess his anger into grace. (46)

That Joseph’s extraordinary love protected and surrounded Mary and eventually Jesus continues to be seen as the story unfolds. The trip to Bethlehem, the flight into Egypt, his teaching of Jesus to be a carpenter are all indications of his love and care.

… in the Middle East, men usually represent their families in any official or legal matters. Why did Joseph take Mary with him to Bethlehem for the registration? The easiest explanation is that he was unsure what might happen to her if he left her in Nazareth without his presence to protect her. It behooves us to see Joseph as the hero of the story without whose courage and understanding of the prophets there would have been no Christmas story to tell. (46)

Take a few minutes to contemplate the Rip Carwell’s sculpture above. Pay particular attention to Joseph standing behind Mary. Imagine Joseph as a courageous and loving man, supporting Mary by standing against the law of his culture. What are your thoughts as you gaze on this image? How does it change your impression of Joseph and his place in the story of Jesus.

Now take a few minutes to think about your own father. Some of us have loving fathers and it is not hard for us to imagine them standing in support of our mothers when they were pregnant with us. Others have less loving impressions. The abuse and violence of my own father meant that I ignored Joseph for a long time. I also ignored the loving gestures my father made towards me. When I was premature infant in a baby incubator it was my father who brought the milk my mother expressed to the hospital each day. It was my father who provided a home and food. As I look at this image I can imagine his love for me and my mother, even though he was rarely able to express it.

Who else has been a father to you? For those of us who don’t have loving fathers to look back at, God often provides substitutes, loving friends or relatives who take the place of fathers and help us create healthy images of a father’s love. I suspect that Joseph did this for Jesus. The stories of his conception by the power of the Holy Spirit must have created distant father images for Jesus, extraordinary as his knowledge of God was. Was it Joseph who formed early impressions of a God of love for Jesus before he fully understood who he was? Was it Joseph who provided loving images that made it possible for him to call God “Abba” and became stories of the warm welcome for prodigal sons? Obviously we do not know but it warms my heart to think of these possibilities.

Now watch the video below. What else comes to mind as you think about Joseph singing a lullaby to Jesus? Is there a response that God is asking of you?

Last but not least, consider the vulnerable people in our world today – the marginalized, the powerless, the homeless, the refugees, those living in poverty or being abused, those discriminated against because of race, sexual orientation, religion. Who protects them from an unjust world? Are there ways that God might being asking us to be their protectors at this season of the year?

Prayerfully consider what God might ask you to do at this Advent season to become a protector for the vulnerable.