The Centering Power of Awe

Slowly. Attentively. Without rush or hurry. One foot placed gently after the other, leaving a single line of prints on the shore. Waves slide over the sand like soft blue bed sheets and leave frothy white bubbles as they recede.

Teach me, God. Teach me.

One last retreat day on Lindisfarne Island before my pilgrimage to Durham begins. I started it this morning watching dark clouds flee from an expanding horizon of blazing orange, and after early prayers at St Mary’s Church, had returned for breakfast as beams of light hit the ocean. Now I walk on the island’s windswept north shore.

I feel the bubbles pop beneath my feet and think about church this morning. We’d read verses from Proverbs 8, where wisdom cries out to be noticed. “I was born before the oceans were created,” she says, before mountains were formed and the first handfuls of soil scattered. And as an artist’s soul can be revealed through her paintings, so this divine wisdom can be glimpsed in creation:

“I was there when he established the heavens…”

“I was there when he set the clouds above…”

“I was there when he set the limits of the seas…”

I stop still and face the ocean.

Attend to what you see.

The salty north wind hits my face, powerful yet benign. It tousles my hair and chills my wet feet. I am alone on the beach. There isn’t another soul for miles. There are no boats, boardwalks, jetties, or hotels—just raw sea, sky, and shore.

I gaze at those waves, so dark and choppy. Another world lies beneath them: schools of salmon and mackerel surging to and fro; shimmering pilchard, cod, redfish, and herring. In those waters are delicacies like lobsters and mussels, and, further out, dolphins, stingrays, and minke whales, and waves so large they can drive tankers to the sea floor.

And the sky above me—a myriad of wonders lies beyond it: millions of suns and trillions of planets in our Milky Way, a galaxy that is but one of 100 billion others, all twirling round like carousels.

I take a scoop of sand and let it slip through my fingers. Each grain is a wonder in itself. For if we were to dive into one we would glide past buzzing atoms, sail through electron storms, crack open protons and find our universe in miniature form, with quarks dashing around in nanoscopic space like shooting stars.

This world is beautifully arranged, finely designed, intricately tuned, wisely made. And to think: if Earth were a little closer to the sun or if gravity were dialed down a few notches, the whole wonderful thing would dissolve in a second.

“I stared at my screen this morning,” my wife Merryn said to me during a difficult season a few years ago. “And I wondered if this is it.”

“If this is what?” I’d asked, watching her chin quiver.

“If this is all my life will be since we’re not going to have children—just spreadsheets and numbers and analysis of data. Dry. Boring. Meaningless.”

And with an unusual boldness, I’d said that was a lie. Merryn’s life would never be meaningless, pointless, or futile. Neither would mine, as unsure as I was about my own identity and calling; nor my readers, for whom I would also walk tomorrow, heading off on a quest to discover who we can become when life doesn’t go as planned.

Because while I have many questions over its tremors and trials, I still believe ours is a meaningful world. Blazing orange skies speak of it, I hear it whispered in the sea and the sky and the shore. And while there may be times when we feel like jigsaw puzzles thrown in the air, wondering who we are and why we’re here, the One who made the heavens and the seas made us with infinite wisdom too.

The same hands that made the galaxies crafted us in the womb.

Making us as significant as the stars.

This post was adapted from Sheridan Voysey’s new book The Making of Us: Who We Can Become When Life Doesn’t Go as Planned (Thomas Nelson). 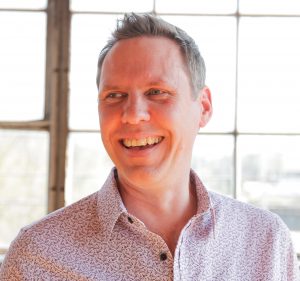 Sheridan Voysey is a writer, speaker, broadcaster, and author of The Making of Us, Resurrection Year, Resilient and other books. He is a regular contributor to BBC Radio 2 and other international networks, and has featured on BBC Breakfast, BBC News, Day of Discovery, and publications like The Sunday Telegraph. He is married to Merryn, and lives and travels from Oxford, United Kingdom. Find him on Facebook, Twitter and Instagram, and get his free eBooks and podcasts at www.sheridanvoysey.com

A Litany For Mother’s Day