QUEEN BERTHA OF KENT; May 1

Our Life Can Influence Our Descendants 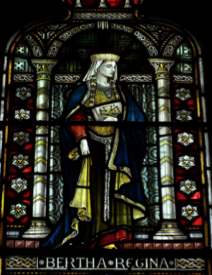 Have we ever given much thought about how our ancestors lives have influenced ours and in turn how our lives might impact our descendants?

Queen Bertha of Kent, a 6th century royal, was influential in transforming the spiritual  life of England as she brought renewed hope, new life, and light to a nation once rich in religious fervor. This nation that had earlier been influenced by both Roman and Celtic Christianity had declined into spiritual darkness over an almost 200 year period after the Romans left England in 407AD. Bertha’s Christian influence not only impacted England, but also infused her descendants who devotedly followed in her sacred path.

Bertha’s life and work was recorded in The Venerable Bede’s Ecclesiastical History of the English People. We also learn more about her in Gregory of Tours’ Historia Francorum (History of the Franks). He was a contemporary witness of this time period and he may have even met Bertha when she was in France.

So who was Bertha? She was a Frankish princess with quite a royal pedigree. She was born about 539AD to Charibert I, the Merovingian King of Paris and his first wife Ingoberga. Bertha was also the great-granddaughter of Clovis, the first king of the powerful Merovingian dynasty and his wife Clothilde who helped convert him to faith in Christ.

Bertha had been brought up near Tours, France and she was given in a political marriage to the pagan King Æthelberht of Kent, England. Bertha’s marriage was conditioned on her being allowed to practice her Christian faith. To ensure that this stipulation was met, she brought her chaplain, Bishop Liudhard with her to England.

It was during Bertha’s reign as Queen of Kent, when she was in her late fifties that Augustine was sent from Rome in 597 by Pope Gregory to evangelize Anglo-Saxon England. It is quite likely that the success of this mission is owed to several decades of Queen Bertha’s Christian influence that prepared the way for Augustine’s arrival in Kent. Pope Gregory wrote to Eulogius, the Eastern Church’s Patriarch of Alexandria, reporting that by Christmas 597, more than 10,000 English had been baptized in just a few short months.  Four years later, in 601, Pope Gregory addressed a personal letter to Queen Bertha, in which he complimented her highly on her faith and knowledge of letters.

Years before Augustine’s arrival in Kent, Bertha longed for  a private chapel in which she could pray and worship, so she restored a church in Canterbury which dated from the Roman occupation, dedicating it to St. Martin of Tours. The present-day St. Martin’s of Canterbury continues in the same building. It is  the oldest church in the English-speaking world and is part of the Canterbury World Heritage site. 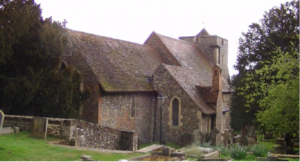 The fervent Christian faith of Queen Bertha was ardently passed on through her children, grandchildren, and great-grandchildren and quite likely further along her family tree. Her lineage is saturated with beloved Anglo-Saxon saints and royalty that influenced and transformed England, especially Northumbria and Kent. Queen Bertha’s descendants are closely connected with Hartlepool Abbey, Whitby Abbey, Ely Abbey, and even Faremoutiers Abbey in France. (to read further about her faith-filled descendants, you may follow this link: St. Bertha’s familial line)

Christian Queen Bertha’s willingness to leave her home in France on a not so easy nor pleasant journey by land and sea to marry the pagan Æthelberht of Kent whom she had never met nor laid eyes on was a defining moment that brought Christianity once again to England. Surely, it is our aspiration that like Queen Bertha, we too, are leaving a great spiritual legacy to our descendants to live into as they carry on the faith throughout the generations.

Our lives will continue to impact our descendants even when we are no longer living. May our spiritual influence passed on through family and friends leave plenty of hope, light, and love for those who follow behind us on the path to Christ, long after we have crossed over to the other side of the veil. 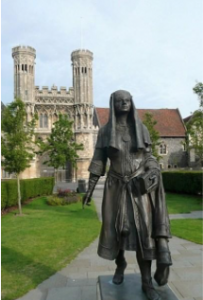 When we are feeling proud; A Poem