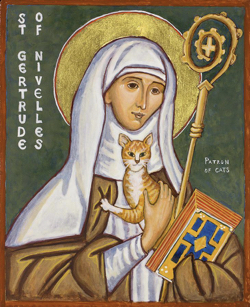 March 17th is not just St Patrick’s Day it is also the feast day for another Celtic saint, Gertrude of Nivelles. Interestingly, Gertrude asked an Irish monk on March 16 when she would die and he said tomorrow. She knew that was St. Patrick’s feast day and she was elated. The monk told her that St. Patrick and the angels would be greeting her.

Gertrude soon began to assign her abbess tasks to others so that she could spend more time in spiritual tasks such as in prayer, in reading, and in scholarly study. She began to build and to support numerous churches that she dedicated to the saints and she ministered to orphans, widows, captives, and pilgrims.. 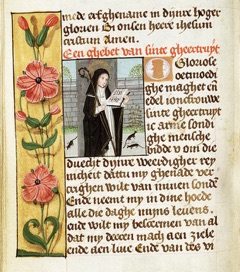 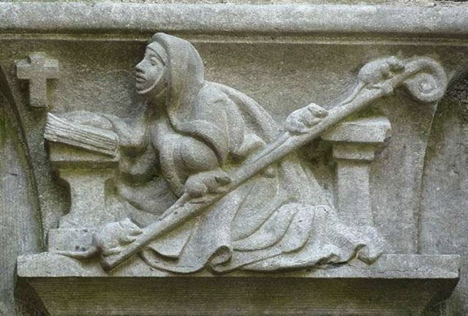 I had never heard of this saint before your post. And that’s despite us checking out everything cat related. ?

Its always wonderful to discover something like this isn’t it?

/The awesome icon of St. Gertrude of Nivelles with the ginger cat is by Jennifer Richard-Morrow.

Where can one purchase a copy of this icon?

Also, has anyone written a collect and compiled Scripture readings for her? One could use the general “Of a Monastic” propers, of course.