Moses and Me: A Biblical and Personal Case for Honoring Birth Mothers

November is National Adoption Awareness Month in the U.S. – a good time for adoptive parents to grow their awareness around the importance of honoring birth mothers. I’ll make my case, first and foremost, by going biblical.

Moses is the first abandoned baby mentioned in the Bible (Exodus 2). Moses gets a lot of airtime throughout the Bible, but what about his hardly-mentioned birth mother, Jochebed?

For three months Jochebed harbored her infant son indoors because of the Egyptian edict that all Hebrew (Jewish) boys must be killed. But hiding her baby wasn’t feasible for long. Growing Moses risked drawing attention – presumably beginning to babble, working up to rolling over, intensifying his opinionated cries. And so Jochebed made a sacrifice play: choosing to set her baby afloat along the edge of the Nile River over a certain and violent death at the hands of the Egyptian rulers.

Surely Jochebed knew the potential for Moses to drown, become breakfast for the Nile crocodiles, or get discovered and murdered anyway. But her decision was likely born of hope and trust. Hoping the Pharaoh’s daughter would approach the reedy area along the Nile where she often visited. Hoping the princess’ reputation for empathy and kindness would result in compassion for infant Moses. Trusting that God would watch over her baby boy when she could not.

While the Jewish mother is often negatively stereotyped as suffocating and intrusive, all caricatures are erroneous – as Jochebed proved. She did her best to shield her son, but when faced with the futility that she could not, Jochebed orchestrated the next-best scenario for him: letting him go in order to give him a second chance at life. 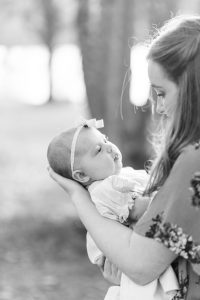 Birth mothers, whether biblical or modern, must be celebrated. The decision to relinquish a baby she has shielded inside her home or inside her uterus – whether driven by hope and trust, and/or as a last-ditch option in the face of evil – is full of agony for the birth mother. If the agony is too much to bear, then it is full of denial – agony disguised.

We honor birth mothers because it is the humane thing to do to pay homage to their sacrifice and suffering.

We also honor birth mothers for the others in the adoption triad: the adoptee and the adoptive mother.

As an adoptee, I’ll fill you in on an insider’s secret that’s backed by developmental science and hundreds of other adoptees’ anecdotal experiences: If you don’t honor your child’s birth mother, you may be causing your child great pain and endangering your relationship. Which brings me to the personal case for honoring birth mothers.

My adoptive mother was uncomfortable talking about my first mother. And so I followed her lead. I hushed the questions that longed to spill from my heart. I did my best to make Mom happy. I had no choice – I couldn’t risk losing another mother. It was a matter of survival. But quietly, unknown to my parents, I concealed an overwhelming battle with rejection.

It took me years to wake up to this, but I felt a divide. The significance of my first mother ignored, I felt I had to choose between mothers. One good. One bad. I don’t think my mom minded much … until realizing she might not be the chosen one.

There were fantasies. I could fall in love with an imagined birth mother more deeply than I could attach to my mom.

I learned grief is something to bury, never to express. I lived out the very definition of depression – pressing down upon my emotions into numbness, hopelessness, thoughts of suicide.

I questioned my faith. What kind of loving God allows for this kind of primal pain that nobody around me would acknowledge and help me work through? How could I believe the Christian story that it’s a good thing to be adopted by God, when adoption means completely severing bonds with first attachments and never looking back?

I was denied my story, my sense of rootedness in the world.

I might have even been denied my divine destiny.

After all, without an honoring of his birth origins, Moses never would have lived out his destiny.

As Jochebed had hoped, the pharaoh’s daughter indeed discovered orphaned Moses and took him in as her adoptive son – gifting him not only life, but also the education and circumstances that later proved essential in delivering the Hebrews out of slavery: Moses’ divine destiny.

Sadly Moses’ adoptive mother doesn’t get a lot of biblical fame, herself. We aren’t even told her name, this member of the royal family, though many scholars believe her to be Hatshepsut. Not only did she mother Moses as if her own, but she rebelled against her father’s tyrannical ways, bucking genocide in a seemingly small but significant way – the way of all great adoptive mothers: heart-led action and fierce love.

Hatshepsut was aware she had adopted an illegal Hebrew boy – even crossing racial lines by hiring Jochebed as a nursemaid until Moses was weaned, likely for the customary 3-7 years. Because of this I have a strong hunch that this became an open adoption. It’s hard to believe that Hatsheput didn’t realize – even if only on an unspoken level – that Jochebed was Moses’ birth mother. It’s hard to imagine Jochebed successfully faked her way through years of breastfeeding, pretending to be a random stranger. Open or closed, though, the act of hiring a Hebrew mother to nurse her adopted son was an honoring that probably wasn’t easy for Hatshepsut on many levels. But it was the right thing to do for all three of them: Jochebed, Hatshepsut, Moses.

Honoring doesn’t have to mean hiring your child’s birth mother as a nursemaid. It doesn’t even have to mean meeting her or ever so much as conversing with her if an open adoption isn’t feasible.

Honoring can be as simple as telling your adopted child the truth, the full story – not a one-dimensional fairy-tale with a false happy “ending” that is really just the first day of your child’s life with you. But the real story – the one that includes the complicated blending of joy, mixed with loss, and will last a lifetime.

Honoring means opening your eyes to your child’s heartache and acknowledging your child’s sadness, even if it’s beyond you and your best parenting to fully soothe away.

Honoring can take the form of embracing your child’s heritage … or gifting a trinket – something your child can wear to remind her that before you loved her so passionately she was also loved by another … or letting your child know that you’re sure his mother is or would be proud of him … perhaps making mention that you sometimes see his birth mother’s eyes in his smile.

There are countless ways to honor your child’s birth mother, and there are countless rewards gleaned by doing so – even if honoring is something you only do once a year during National Adoption Awareness Month.

However, or whenever, you honor isn’t what matters. And it is never too late. Even though it took a Moses-like number of 40 years, my parents bravely began to honor my birth mother, bringing forth healing and a deepening of our relationship.

What matters is that by honoring your child’s birth mother you are expanding upon that foundation that delivered her baby into your arms: hope and trust. Hoping for healing. Trusting, that with God’s help, it will come. Hoping that through your honoring you are modeling God’s love – a love that is wide enough to make room for all without squeezing out a single soul. Trusting that your child’s heart will find rest in the power of love, feeling it from the robust trifecta of a birth mother, an adoptive mother, and always, of course, from God.

Let Light Emerge From the Darkness

Freerange Friday on Saturday: Are you Steeping or Fussing?

Celebrating Interdependence this 4th of July

Lifting the Flagging to Valor

Pouring a Gin and Tonic on World Malaria...

A Poem for Passover

Reflection on Chinese New Year by a Diaspora...