Oh My God – A Billion Pounds of Pumpkin… 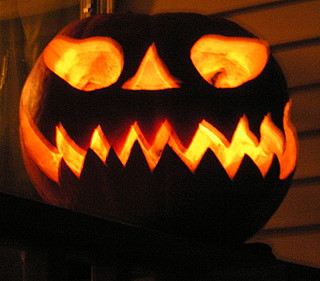 Did you know that over 1 billion pounds of pumpkin end up in the landfill after Halloween each year? And then of course there are all those costumes, decorations and of course the candy. The total impact on our landfill is staggering.  It is a very sobering. And in case you think – well it’s organic so it should compost and be good for the landfill, here’s some more bad news – organic matter needs oxygen, bacteria and water to decompose and the landfill doesn’t like that. It tries to keep the pile dry and without oxygen because it doesn’t want decomposing matter to heat up and cause a fire. So the less the pile decomposes the better which means those pumpkins could be around for a very long time.

So what can we do? Here are some suggestions from a post I did a couple of years ago that I thought it was worth revisiting.

As I mentioned in another post Halloween Is Coming – Resources for a Green, Fair Trade, and Ethical Halloween, some Christians see this celebration as evil and like to stay home with lights off. Others feel we should participate in ways that engage and redeem the culture and as the practice becomes more popular around the world it is something all of us need to think about.

Whatever your approach to Halloween I think there are some things that all of us should be aware of.

As this helpful article says: a lack of regulation in the cosmetic industry and misleading marketing labels mean that parents may unknowingly spread harmful ingredients on their child’s skin. They list the few safe paints: Elegant Minerals, and a recipe for DIY paint. I also found this really inexpensive and simple alternative to purchased face paints which the website says is safe enough to eat, and though we may not want to experiment some of our kids probably will.

The CDC has an excellent list of safety tips to think about as you both dress and send your kids out.

And another great list from the American Academy of Pediatrics.

And probably one of the most important: A big part of Halloween safety is making sure drivers can see your kids as they’re crossing the street or walking from house to house. Give your trick-or-treaters their own flashlights and/or light-up or glow-in-the-dark accessories.

41 million kids in the U.S. go trick or treating. In 2019, Americans spent something like 2.7 billion on Halloween candy. No wonder one out of three children in America are overweight and many will develop diabetes. Consider making your own healthy treats, giving out non-food items like polished stones, temporary tattoos, or friendship bracelets. You don’t want to be the neighborhood witch or warlock, but who says you’re required to hand out candy.  Kids may feel slightly tricked, but parents will appreciate your efforts to save their sweet tooth…literally.

Most chocolate sold in the US is tainted by child slavery and exploitative conditions for adult workers. Fairtrade eliminates child labour and ensures healthy working conditions with a living wage for workers. Thousands of groups of Trick-or-Treaters in the United States and Canada unite at Halloween each year to help:

How? By distributing Fair Trade chocolate to adults, attached to a card explaining these problems in the cocoa industry and how Fair Trade presents a solution. You can learn more about this initiative here.

What Do You Do With All Those Pumpkins?

You don’t have to let your pumpkins rot on the front porch or throw them out.

You can use them for soup or stews. You can compost them, or you can feed them to the wildlife or to your dog. One of our dog Goldie’s favourite evening snacks is a bone stuffed with a homemade mixture of yam and cheese but pumpkin would work just as well. I make up a batch about once a week – a ratio of 3-1 yams to cheese, cook the yams, and then grate all the yams and cheese, mix it together and store in the fridge. I make enough to last at least a week. I stuff her bones each evening ready for the next day then freeze them. (she gets about 3 during the day). They are much healthier and considerably cheaper than the ones you buy.

However if you would rather cook for your family rather than the dogs here are some of my favourite recipes:

Getting Ready for All Saint’s Day

Resources For A Green, Fair Trade and Ethical...

How Toxic Is Your Halloween?: Updated for 2022

Let’s Get Creative With Pentecost.

Its Valentine’s Day – Let’s Be Generous With...