Breaking Down Walls: Lessons from a Compost Bin

From time to time I write about what my garden is teaching me about life. Paying attention to the plants, insects, birds and soil with which I share space helps cultivate within me the practice of listening to my own life. The informal education my garden provides continues to shape me as a person: humus making me more human. Sometimes formal education in gardening does the same.

Three years ago, I participated in a Master Community Gardener course offered by Seedleaf, a wonderful organization in our neighborhood committed to “nourishing communities by growing, cooking, sharing and recycling food.” The most interesting session for me was the one on recycling food, better known, perhaps, as composting. We’ve been trying to turn kitchen scraps, grass clippings and leaves into compost for more than a decade, with varying degrees of success. I had always heard if you could just get the pile hot enough, it would break down everything you put in it into ‘black gold,’ the nourishing soil amendment that is compost. But there were always those woody stems – thick cellulose walls – from the bigger plants that never seemed to break down. So, I assumed my pile wasn’t producing enough heat, pulled out those woody stems and put them in the yard waste bin.

But then in the session on composting I learned why that was the case, and how to change the way we went about composting in order to break down those thick walls. Along the way, I began to think about other walls that need to be broken down, (tasks in which we seem to be making little progress) and what we might learn from the humble compost pile.

There is no question that at this moment in US history, the walls with which we live – walls which divide us from each other – appear to be growing stronger. Walls that divide us based on the amount of melanin in our skin. Or the language we speak. Or our religion. Or the political party we identify with. Or the amount of education we have. Or our gender and/or sexual identity. Literal walls that create ‘gated communities,’ whether those are high-end housing developments or prisons. Walls that separate families, communities and sovereign tribal nations across national borders. 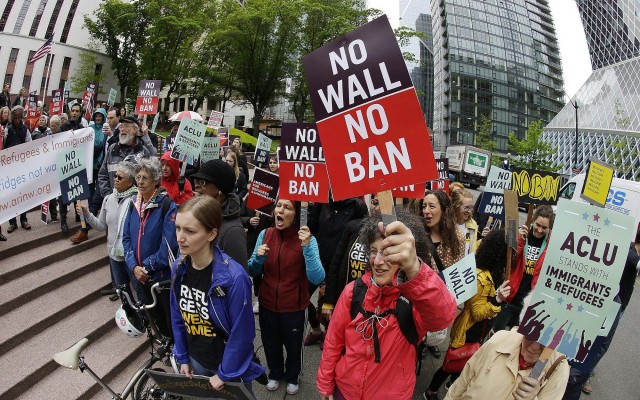 Protesters outside a federal courthouse in Seattle, May 15, 2017. (AP Photo/Ted S. Warren, File)

Over the past few years we have witnessed people take to the streets to protest these walls, in their hundreds and in their hundreds of thousands. I’ve walked in some of those myself. It feels good to be reminded that not everyone is in favor of such walls. These protests generate a lot of heat, both in real life and online, especially those that have drawn large crowds across the country. But when the cardboard signs have been placed in recycle bins, the hats hung on hooks by the door, and words to catchy chants forgotten, the cold, hard reality is that all that heat rarely makes a dent in the walls.

Enter compost. Yes, compost piles generate heat. But that’s not enough. In the Seedleaf course, I learned that there are two phases to composting: bacterial and fungal. The first ‘wave’ of bacteria are cellulose eaters, and they are mesophilic – they don’t like it too hot, nor too cold. They begin to break things down for what comes next – the heat. Because the second ‘wave’ of millions of individual bacteria are thermophilic – they love the heat – and they get the pile up to about 160 degrees, which kills the weed seeds and pathogens I don’t want in my garden beds. But then they die off, and unless the second phase happens, for all that heat, I’ll be left with half-finished compost, with all those thick woody stems – tough, cellulose walls – remaining. The second phase sees the rise of mesophilic fungal communities, who are lignin eaters (the woody stems). And their long, slow, steady work will eventually break down the toughest of those walls and leave me with the ‘black gold’ I’m looking for.

Marches and protests and the heat they generate are important. But they’re not enough. And they’re sometimes co-opted by people with personal and political agendas who are drawn by the heat of the moment, but who often overlook those who’ve been doing this work for a long time. Because just as my compost pile needs fungal communities to break down walls, we need people committed to the long, slow, unseen and non-heat generating work of building communities that will – in time – break down the walls we live with. People who may themselves march in the streets, but who then return to their neighborhood, roll up their sleeves and get back to their ongoing and unheralded work of dismantling the walls that have been built to divide people.

In my neighborhood, the people cultivating ‘fungal communities’ are often women of color. People like my friend Tanya, who opens her family’s home on Saturday mornings for a neighborhood breakfast. While she fixes waffles and brews the coffee, you might find a city council member sitting at the dining table talking about affordable housing with someone whose landlord takes their disability check and gives them $20 a week, while refusing to fix the stove/broken window/plumbing/heating in their draughty apartment of last resort. People like April, who, together with her sister Sarah, has quietly been doing this work for years. You’ll find April at a Fresh Stop market, organizing more equitable access to fresh produce with an innovative CSA. People like Anita, who lost a son to gun violence in the park at the end of our street, and who organizes ongoing ‘Peace Walks,’ and advocates for more creative ways to address conflict in our community. People like Christine, a master gardener herself, who helps bring all kinds of people together to grow food and flowers and friendship.

If we really want to do away with the walls that divide us from each other, while we may be drawn to the heat of whatever the next protest is, dismantling those walls will involve showing up within the fungal communities that already exist, and joining the long, slow, often unnoticed – and unfunded – work that has been going on for a long time. Especially when that gives us the opportunity to be led by people who have as much to teach us about the work as my garden has to teach me about life.

Sean Gladding is a storyteller, pastor, community gardener, backyard chicken keeper and YMCA soccer coach. I’m married to Rebecca, am father to Maggie and Seth, and we live, love, work and play in the MLK neighborhood in Lexington, Kentucky, where we are part of the Fig Tree Collective. You can read more about our life in the East End here.

My first book, The Story of God, the Story of Usis an attempt to tell the ‘Big Story’ that unfolds in the pages of the bible. Churches, small groups, colleges and seminaries use it as an introduction to the bible – both for folk who’ve never read the bible, and those who’ve been reading it for years. It was one of Relevant magazine’s Top Ten books of 2010, and is available as an unabridged audiobook, read by my wife Rebecca and myself. My second book, TEN: Words of Life for an Addicted, Compulsive, Cynical, Divided and Worn-out Culture, was also published with IVP. I also contributed to Banned Questions About Christians.

Will You Join Those Enabling Gen Y &...

COVID-19 Pandemic…An Opportunity for Your Church to Care...