Q and A for World Chocolate Day – July 7th

Did these folks sweeten their chocolate drinks? Usually not, although honey was added occasionally. When the Europeans first encountered chocolate, on Christopher Columbus’s fourth expedition to the New World in 1602, they remarked on how bitter it was. Columbus brought chocolate back to Portugal, and in the next century it spread to other European countries, sweetened with sugar or honey. 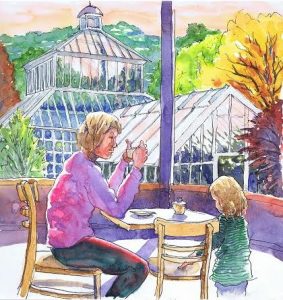 Illustration: A cup of hot chocolate in a beautiful café by Dave Baab

What’s the difference between cocoa and cacao? You can see both names here: the tree that produces cocoa pods is called “theobroma cacao.” When you look on a grocery shelf today, you can often find both cocoa and cacao powder. The same big cocoa pods – six to ten inches long and weighing around a pound – are processed slightly differently to produce the two powders. Usually cacao powder comes from pods that have been dried in the sun, while cocoa powder comes from pods that have been roasted.

Why does a blog on Christian spirituality have a post on chocolate? One reason (of two) relates to the source of most of our chocolate today. About two-thirds of the world’s supply of cocoa pods is grown in West Africa. In sub-Saharan Africa, 30% of children under 15 – more than 1.8 million children – work in agriculture, most of them involved in cocoa farming. About half of that West African cocoa comes from the Ivory Coast, where trafficking, as well as child labor, is common. In 2009, Salvation Army International estimated that of the 200,000 children who help to grow and harvest cocoa in the Ivory Coast, up to 1200 of them may have been trafficked into slavery. So chocolate is associated with child labor and slavery.

Wow! What can we do? One of the commonly proposed solutions is to buy fair trade chocolate, where workers are supposed to receive a fair wage. Unfortunately, that doesn’t appear to be true in the area of chocolate production. In 2014, The Economist stated that fair trade farm workers have a lower standard of living than on conventional farms. Others have criticized fair trade as well. You can google “fair trade debate” and find many articles.

What’s the other reason for this post on chocolate on the Godspace blog? “Theobroma,” in the name of the tree that produces cocoa pods, means “food of the gods.” Anyone with a tendency toward a chocolate addiction will resonate with that name.

I signed up to research and write this post because of my long history of overeating chocolate. Other people might abuse alcohol or drugs; I have often joked that chocolate is my drug of choice. In recent years I have come to realize that the chocolate-sugar combination functions like an addictive drug for me, even in very dark chocolate which does not contain a lot of sugar. I now use dates or stevia to sweeten cacao powder, and I feel much less compelled to overeat it.

For those of us who struggle with any kind of addiction, one challenge we face is to increase in our willingness to view our addiction as a place where God can work. I spent many years growing as a Christian in some parts of my life, while walling off my over-consumption of chocolate into another area where God was not invited to dwell.

God is in the business of integrating us into whole beings. God wants my eating habits to be part of my discipleship. Likewise, God wants my shopping habits to reflect Christ’s care for all people. Chocolate provides an opportunity to do both.

Freerange Friday: The Practice of Pilgrimage

Meditation Monday – For Love of Lavender

The Healing Power of Play