THE VENERABLE BEDE – Delighting in our Giftedness

“It has always been my delight to learn or to teach or to write.” -Bede

Don’t we love it when we discover our calling and can name what it is that we really like to do in God’s kingdom? St. Paul talks about how we are all given gifts by the Spirit to produce the body of Christ that is whole and complete.

As a youth I desperately desired to be a magnificent singer so that I could sing solos in church. Yet, that desire to sing like an angel was never fulfilled. Instead, I discovered over time that my delight, like Bede was in learning and writing. Instead of singing solos in the pulpit at church, I am a pastor, preacher, and writer with a passion for the Celtic and Anglo-Saxon saints. Yet, I did not fully grasp this gift until I was in my forties.

The Venerable Bede was truly an interesting early 8th century fellow and a renaissance man of sorts. He tells us in his famous Ecclesiastical History of the English People that he was sent to the newly founded Jarrow Abbey  in northeast England when he was seven years old. Bede describes how the plague decimated Jarrow  and that only the Abbot Ceolfrith and a young boy (likely himself) survived the plague.

I first encountered Bede through an early Celtic/Anglo-Saxon religious leader that he greatly admired and wrote about in his History, St. Hilda of Whitby.  Hilda was the Abbess and founder of numerous double monasteries in northern England in which men and women both lived and served under her leadership. 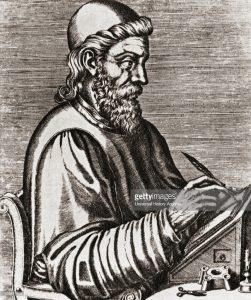 To compose his famous History, Bede used numerous written biographies that he must have had available at the large library at Jarrow.  His Bishop, Benedict Biscop had purchased in several extended buying tours to Rome, numerous religious relics, paintings, and books to adorn his new abbeys and their libraries.

Bede also interviewed those who lived through the foundational years of early Anglo-Saxon England. One of Hilda’s five students that became Bishops of England, was St. John of Beverley who ordained Bede as a deacon and later as a priest. It is quite likely that John provided Bede with much detail on Hilda’s life. Another person Bede likely interviewed was the historian Adomnán, who was also the 9th Abbot of Iona and the biographer of St. Columba.  Adomnan visited the abbot Ceolfrith when Bede was a youth.

Historians throughout the last 1300 years have been grateful for Bede’s love of writing and his desire to make sure that his history was correct. Bede not only wrote his History, but also he  wrote books of poetry, hymns, lives of the saints including the Abbots of Wearmouth and Jarrow, and even scientific treatises. A list of all of his writings can be found at

Bede was also known for teaching the younger monks at Jarrow Abbey.

Bede lived in the Wearmouth-Jarrow twin monasteries until he was about sixty-two years old. That’s a long time to live with the same gender in the same place. It is said that even though he had a difficult time breathing and that his feet swelled, he dictated to a scribe his remaining thoughts. The last thing he did was take his little box of the only treasures he possessed in his life and gave away his tiny bit of pepper, napkins, and some incense.

To the end of his life, Bede still so delighted in writing that he was insistent in having a scribe write down his ideas when he no longer had the strength to sit up or hold a quill pen.  1300 years later, Bede still is a teacher as we read his writings and we learn from him.

How are we using our abilities, training, creativity, passions, and inner giftedness to bless God, our family, our neighbor, and perhaps as with the life of Bede, many future generations of learners and seekers after God?  Like Bede, may we discover our delight and begin to master this gift that has been given to us through the Spirit of our Living God. Your gift and your calling is needed to make planet earth a better place to live.

Rev. Brenda G. Warren is an ordained Christian Church (Disciples of Christ) pastor and former theological and public library director. She writes about the Celtic and Anglo-Saxon saints on her Celtic 40 days of Advent (Celts to the Crèche) website, www.saintsbridge.org

What Do You See?

Release the gifts within us, Lord – A Prayer