We Carry Resurrection in our Mouths

There are few things as foolish as offering the task of spreading an eternal message—a revolutionary message—to women in a society shaped and ruled by patriarchy.

Women had no position, no place, no authority, no power.

We might even ask: What was God thinking? These women would not have been regarded as credible witnesses. The system around them dismissed their voices—no credibility here. They were nobodies in the eyes of their society. They did not have cultural, religious or political authority to spread a message to the ends of the earth.

The very act of telling women to carry this message, seemed hopeless and ridiculous.

Giving a woman an important message to share in a larger society, would have seemed like a death sentence to that very message. Kind of like a baby boy born during the time of Herod.

If the HOW matters, was there great purpose in God trusting women with the message first? I believe God speaks through the how here, as much as through the very message itself.

Resurrection power was meant for the messengers, as much as for the hearers.

God didn’t just care that a message went out. God designed the story so the lines of transmission became prophetic conduits of the message. The messengers became the message.

But just like the women, whose words seemed like nonsense to some who heard it, the dismissal and ridiculing of Resurrection voices are still happening today.

When a woman tells her story of rape.

When black voices are crying out for resurrection in the justice system.

When a woman speaks up about abuse.

When indigenous voices rise to protect the land.

When LGBTQ bodies long for dignity and honor.

When women are speaking up in hierarchical churches, crying out for ears to hear.

May we have eyes to see, ears to hear and mouths willing to carry this message. 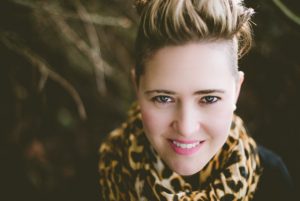 Idelette McVicker is founder and Editor-in-Chief of SheLovesmagazine.com and Dangerous Women Tribe, curating community spaces for women to become strong in their faith and voice, working for peace and justice in the world. Together we learn and practice how we belong to each other.

As an Afrikaner woman, born and raised in South Africa during the Apartheid years, Idelette’s story has both wrecked her and shaped a longing in her heart for a more free and equal world, alongside a humble passion for anti-racist work.

After training as a journalist in South Africa, she lived in Taiwan where she wrote for daily newspapers. She moved to Canada in 1999 and now home truly is the world. Idelette travels and speaks around the world, seeking and witnessing God’s heart for healed and whole relationship.

Idelette is a writer, immigrant, mother of three and a restaurant wife. She loves Jesus, justice and living juicy.

A Valentine’s Poem by Wendy Cope

The Greatest Love Poem of All