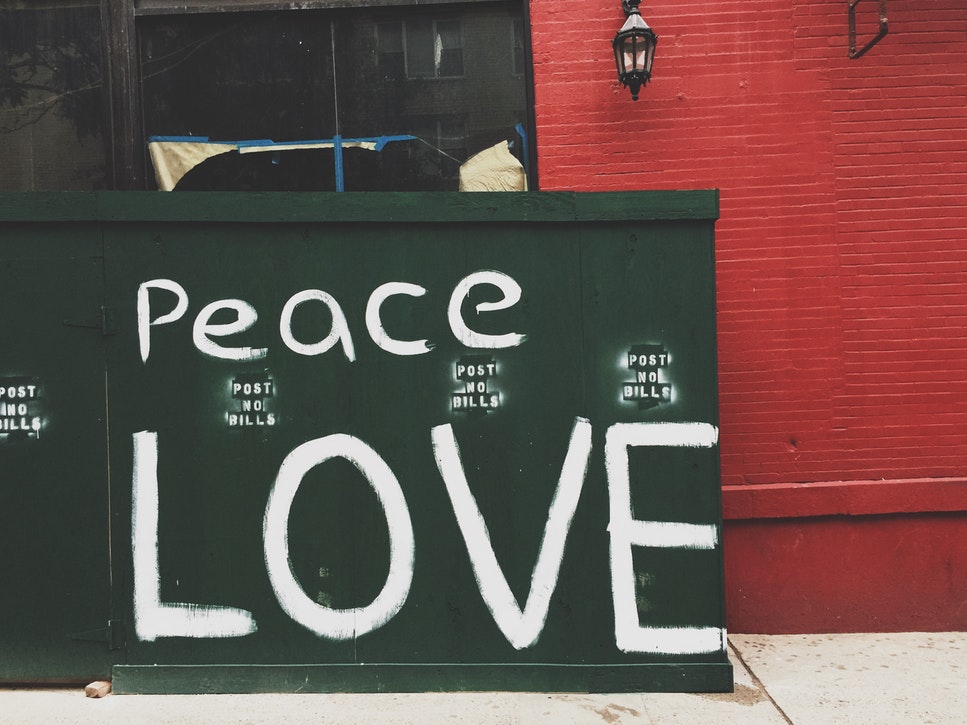 A story by Keren Dibbens-Wyatt —

Saint Francis lasted longer than I did at the Conference for Christian Leaders “Using Your Influence”. He sat through several speakers and nodded politely here and there whilst fiddling with the knots on his long string belt that symbolised his sacred vows. Mostly he kept his eyes shut and just peeked out at the thousands of people seated round him occasionally and then wisely shut them again. Sometimes it is just better to gaze at the inside of your own eyelids. The lights were bright and hot, and the air felt strange in the huge auditorium, full of a pumped up testosteronic excitement that had pulses and egos racing.

After a while though, he did what I did and wandered out to the corridors where the drinks and vending machines were, and ran the water fountain, cupping his bleeding hands in the stream with clear delight, and lifting the coolness to his tired face. He drank long of the sweetness, and sploshed his face. I had done the same, and then tried to steel myself to go back in, but I just couldn’t do it.

“Hello,” I said and he smiled, a little warily, in case I was one of them. I even think he looked round for the exits, just in case, and I can’t say I blame him.  I didn’t know what to say, really. But words have a habit of forming anyway, and there was certainly a torrent of loud ones being amplified behind us in the main room.  “Isn’t it awful?” was what I came up with. He smiled wider then. Did he even speak English? My Italian was not up to much. Poco barely covered it.

“I don’t know,” I said. I suspected it meant bums on seats, but I wasn’t going to sully this conversation with that thought.  “More followers?” I hazarded.

“For them or for Christ?” he asked, bluntly. I loved him even more right then.  I laughed.

“I will leave now. I don’t know why they asked me,” he said, looking small and fragile in the clinical surroundings and artificial light.

“Are you not a speaker?” He shook his head.

“What could I say to this,” he shrugged his shoulders and flung his arms out in a typically latinate gesture, encompassing the whole conference, “to whatever this is? This is no place for God’s fools. We do not belong. We are bleeding and small and unworthy.”

“I know. They asked you for kudos, to make it look like you approved.”  That smile again. I knew he could not know what I meant, but he understood the longing in my heart.

“We will leave now. Will you join us?”

“Most gladly.” I did not care where he was going. But, “We?” I asked. He frowned a little, and lowered his voice, though no-one was listening. 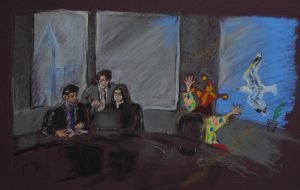 “Have you seen a small, odd friar with a far too joyful face anywhere?” I wanted to say, “You mean apart from the one standing in front of me now?” and then realised I could, and did. He laughed. “Si, si, another one!”  Behind him I saw a pair of burly security guards carrying out another raggedy Franciscan friar, his brown tunic hanging loosely on his gangly body, his eyes rather wild but full of joy.

“This one belong to you?” the guards asked Francis roughly. The saint nodded, unruffled, but concerned for his brother. “We found him stealing things from the conference booths. He says he was going to give them to the poor.  Didn’t even try to hide them. Is he dangerous?”

“Dangerous? Juniper?” Francis sighed, “Only to himself.”

“Will you vouch for him? I don’t think arresting a monk would look that great with the conference on and all. Especially if he’s with you.”

“We vouch for him,” I said, “And we’re leaving now in any case.” Francis nodded, and Juniper followed suit, nodding a little too much and too hard, as expected.  They let go of him, seemed glad to deliver the problem to someone else, and he slumped down onto the shiny tiled floor. “We ought to make him empty his pockets first,” said one to the other.

“Man, he aint got no pockets, look at him!” said the other, and they sauntered back inside the foyer.

“Oh Juniper, what have I taught you about stealing?” said the great man, puddles of blood now pooling below him from his stigmata. Juniper looked shame faced for just one moment before shedding it in a heartbeat and an exclamation.

“But, my brother, they have so much! Always we have the poor with us. These people will not miss a thing.”

“I know, I know,” and with that we all ambled out of the building for good, the saint, the idiot and the failure, three holy fools arm in arm, knowing that there was no place like home, and that it was definitely not to be found in a place like this.

When we were safely three blocks away and standing waiting for the train, Brother Juniper giggled to himself and produced from within his stinking tunic a stack of books. Francis rolled his eyes as his fellow friar gave the books to a homeless veteran sitting on the platform.

“What the hell am I supposed to do with these?” she wisely asked. I explained she might sell them to those conference attendees passing through, and gave her a few dollars to use as change, or for whatever she needed. She shrugged, and set up a book stall on the ground. “These stolen?” she asked with a scowl.

“Taken,” said Juniper, “from the Lord’s followers. So they won’t mind.” I rolled my eyes, something Francis had long ceased bothering to do.

“They might mind,” I said, just to warn her.

“Good,” she said warmly. “If I get arrested I will be in the warm and dry. Looks like rain.” Francis, long-practiced, reached out an arm to stop Juniper lifting off his tunic to give to the woman.

“She has clothing, Juniper, and the sight of your scrawny hide is unlikely to give our sister any comfort.” Juniper acquiesced to his teacher, and the train came, and we got on, not knowing where we were headed, not having any fare, with no plan for how to grow the potential of our churches, just glad to be away from the cold harsh lights and the business mantras and the stench of success.

Remind us, Lord : A Prayer