There once was an old stone wall. Its lot felt difficult and its burdens heavy. It guarded the inside and it patrolled the outside, and felt the pushing of both on either flank.  In places, because it was old, and softened by the wind and the rains, it had begun to crumble. Nuggets of sandstone would fall off into the soil and pebble dash the flower beds below. Trellises were nailed into him here and there, and roses trailed across his body, tickling his bricks and scratching his skin with their blasted thorns, though he did have to admit the flowers were rather beautiful.  Birds came and nested in the roses and the wisteria, and the ivy, and all his length seemed given over to some life or other. There was hardly a crumb of himself left bare to call his own.  He felt very weary and sad, and quite honestly, put upon.

He had not complained once, out loud, but some things you can only hold in for so long, and one day he started to tell his troubles to a swallow that was passing by on its way to other, more exciting continents that the wall would never see, but the bird was already gone before the wall had spoken a sentence. How rude, thought the wall.

He kept his pain locked inside even longer, and then one day, when a friendly looking squirrel was burying things in the raised beds inside his perimeter, he dared to open up again, but the small creature was far too busy counting her hoard of acorns to really pay much attention, and only nodded here and there, and said, “Quite,” once or twice, albeit sympathetically. This wasn’t really the listening ear that the wall needed. He sighed and locked his sadness down once more. 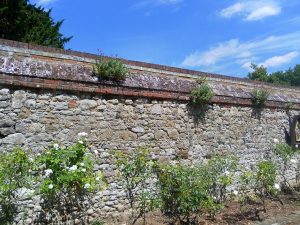 A few weeks later, he felt the sticky irritation of a snail which was sliming its way up him, and began his tale of woe, since he figured the unidexter would not be able to skate away from him before he’d finished speaking, and he was right. The snail seemed indeed to be listening, its tentacles waved in all the right places, and there even appeared to be a nod once or twice. The wall told his new friend all about the roses, and the duty, and the birds’ nests, and the gardeners who came and nailed things to him, and the grass that grew at his feet, and the strain of keeping everything in and everything out both at the same time. He told it about the tickling and the scratching and the digging, about his crumbling and his holes and his having to be still and never going anywhere at all ever, about his desires to see the world and make something of himself, and his despair over his great age.

At length, he ran out of misery to tell the snail, and stopped talking. The snail, who had stopped in its tracks, then said something rather surprising. It said, “Wow.”

“Wow?” answered the wall, not sure he had heard right.

“Wow, just wow.” Said the snail. The wall was a bit annoyed.

“What do you mean by that? Do you think I have a lot of troubles?”

“Troubles!!” exclaimed the snail, “Is that what you call them?” and most aggravatingly, he laughed, a great big belly laugh, too, which sounded very odd coming from such a tiny creature.

“Yes. Indeed, heaps of troubles! What would you call them then?”

“Well my friend,” said the snail, and the wall warmed to it, as no-one had ever called him friend before. “I call them blessings.”

“For sure! To be a guardian, and a protector, to hold space for so many lives. To rock sparrows to sleep and provide shelter to house martins, to be a safe place for so many creatures to grow and thrive. To be covered in beautiful flowers, to have reached such a great age and been a help to so many lives, large and small. Certainly, I call those blessings! And as for travel, you have already gone so much further in your great length than I will wander in a lifetime, and try as we might, even my children’s children may not manage to finish exploring all your magnificence. You are very great, wall, and mightily blessed. It’s an honour to know you, and to walk upon you with my one foot.” The snail bowed.

If the wall had had a head, it would have been spinning. Blessings? Greatness? Protector? Were all these things true? Had he been so ungrateful and so blind all his life not to see himself and his lot this way?

“Dear snail, thank you. I… I don’t know what to say. It has been wonderful to be listened to, and to hear your gastropodic perspective. I wonder why I have made such hard work of my life.”

“Well, if you ask me,” said the snail, cocking its head to one side, as it always did when thinking deep thoughts, “You need to breathe more deeply, and maybe instead of thinking that your insides are trying to get out and your outsides are trying to get in, look at it that you are simply a frame, a border, like a ..” it stopped to find a suitable analogy from its little life. “Like a raindrop is water on the inside and air on the outside, else it doesn’t have a shape, and both are happy where they are.”

“Well,” said the wall in wonder, “What a wise snail you are! I have been a fool. I shall be my shape. Breathing is what I shall do, and the more porous I get the deeper I shall do it. Thank you.”

“You’re welcome,” said the snail, yawning, for all this listening and thinking and talking had quite worn it out. And a few moments later, the snail fell into a deep, relaxing sleep, curled up in its shell, stuck to the wall. And the wall felt it there and felt the blessing of the tiny coiled creature, its microscopic breathing (did you know a snail could snore?) and the loveliness of the sticky curtain it had drawn across its doorway. He felt proud to know it, and all its friends and relations, and it was not very long before the wall was counting his blessings and feeling quite dizzy with the amount of them. He then remembered to breathe deeply, and looked about himself with a grateful heart, a very different wall from an hour ago, and yet to all appearances, exactly the same.

Bringing Mission to Our Tables

Meditation Monday – The Joy of Hospitality

Let’s Get Ready For Some Hospitality – A...

Hospitality, Opening Doorways to the Kingdom – The...

Meditation Monday – Doorways to the Kingdom

Hospitality as Means of Health, Wholeness and Shalom

[…] Dear readers, if you enjoy my work, you might like to pop over to Godspace today and read my short story “Wonder Wall” about extending hospitality to ourselves and others. Spoiler: there is a snail in it    https://godspacelight.com/2017/07/19/wonder-wall/ […]

Only you would realise snails were so wise! I needed to read that today, thank you. And I learned a new word – unidexter! 🙂

What a truly remarkable and wondrous story. There is a lot of deep hidden meaning in this story, that will speak to us all in many different ways. How it speaks to you is just for you and you alone. This is a story about connection and uniy and how all things are connected as one many parts of one whole. This is the Good News. Thank You Keren. This touched my heart in many ways.