Injustice at the Table

This is a past post from 2014 from Andy Wade on hospitality, our theme this month —

The best and brightest were invited. But one by one they made excuses for why they couldn’t come. Undaunted, the host quickly sent word into the surrounding community – all were welcome, come and dine! Was the point of this story injustice at the table? I hadn’t really read this story like that before. But this time it seemed to stand out like a glowing neon sign. Luke 14:16-24. This was one of our passages for reflection at our annual Celtic Prayer Retreat this past weekend. The story begins:

Jesus said, “Someone gave a great dinner and invited many. At the time for the dinner he sent his slave to say to those who had been invited, ‘Come; for everything is ready now.’ But they all alike began to make excuses. The first said to him, ‘I have bought a piece of land, and I must go out and see it; please accept my regrets.’ Another said, ‘I have bought five yoke of oxen, and I am going to try them out; please accept my regrets.’ Another said, ‘I have just been married, and therefore I cannot come.’” (Luke 14:16b-20) 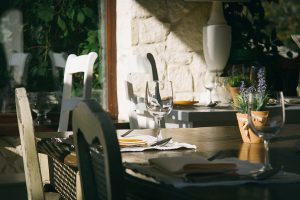 It’s all about being ready to drop everything when Jesus returns, right? Well, maybe a little bit. If we read the story in context, we could still be confused if we’re not paying attention. Right before this story are two short stories, one about humility at a wedding banquet – do you choose the place of honor or the place of humility? The other is about who to invite when you throw a party – basically, don’t invite those who are important and can return the favor, invite the poor and the outcast, invite those typically excluded from the party. (Luke 14:12-14)

Again, it would be easy to hear these stories as simply speaking to the attitudes of our hearts – a kind of instruction for personal holiness and piety. But as I read and re-read this parable something broke through, something I hadn’t noticed before.

“So the slave returned and reported this to his master. Then the owner of the house became angry and said to his slave, ‘Go out at once into the streets and lanes of the town and bring in the poor, the crippled, the blind, and the lame.’ And the slave said, ‘Sir, what you ordered has been done, and there is still room.’ Then the master said to the slave, ‘Go out into the roads and lanes, and compel people to come in, so that my house may be filled. For I tell you none of those who were invited will taste my dinner.’ ” (Luke 14:21-24)

“There is still room.” These were the words that stood out to several of us at the retreat. Important words, to be sure, but there was more. As I reflected on this story I began to see something else. Jesus was not speaking to me as an individual, but to us as a people. The Israelites were set apart not to live in isolation but to demonstrate a better way of living, a way that put God in the center of all life. And they were then to become a nation not of walls, but of welcoming, a people who would become “a blessing to all the nations of the earth.” (Gen 12:2, 22:18, 26:4 and elsewhere).

Jesus’ ministry is packed with examples of breaking the rules about who is welcome and who is excluded. Making a point of going to the marginalized and “least of these”, Jesus threatens the status quo of social religious norms. Even if we “get” this message, it’s often all too easy for us to project this message onto the Jews of Jesus’ day. This was their problem.

In re-hearing this story I discovered an ethical “thin place” between the here-and-now kingdom of God, and the yet-to-come kingdom of God. My actions here and now not only reflect the priorities of God’s kingdom to come, they create doorways into that kingdom today, both for those who are invited to the table and the ones who host the party.

Just as the Israelites were called to be a blessing to all the peoples of the earth, so we who follow Jesus are called to do the same. In fact, when you look at the people compelled to come in from the streets and byways, they’re the very ones excluded by the pious followers of God. The victims of injustice at the table. In contrast, Jesus spends much of his time loving and partying with those who have been excluded, marginalized, rejected. Then Jesus compels us, “Come, follow me.”

So the questions that kept challenging me were, “Who’s on my invite list? Who’s excluded?” These are not simply theological questions where I can give the right answer in my head, but in my life make lists which exclude. Jesus told this story not just to make a point, but to make a change.

So I leave you with this question: is there justice at your table?

That post really spoke to me,as so many of your posts of late have. I really think you are on a role with the a of hospitality and all the ways we open ourselves-exrend ourselves and reach out.
thank you

Melissa, thanks for the reply! It’s been a powerful and eye-opening summer for us here at MSA as we’ve been exploring this theme of hospitality. As you can tell from this post, and the one that follows it on the MSA website (http://msainfo.us/2014/08/19/story-neighborhood/) this passage really touched a nerve for me. Thanks for your encouragement.