Meditation Monday – Living Into The Sabbath 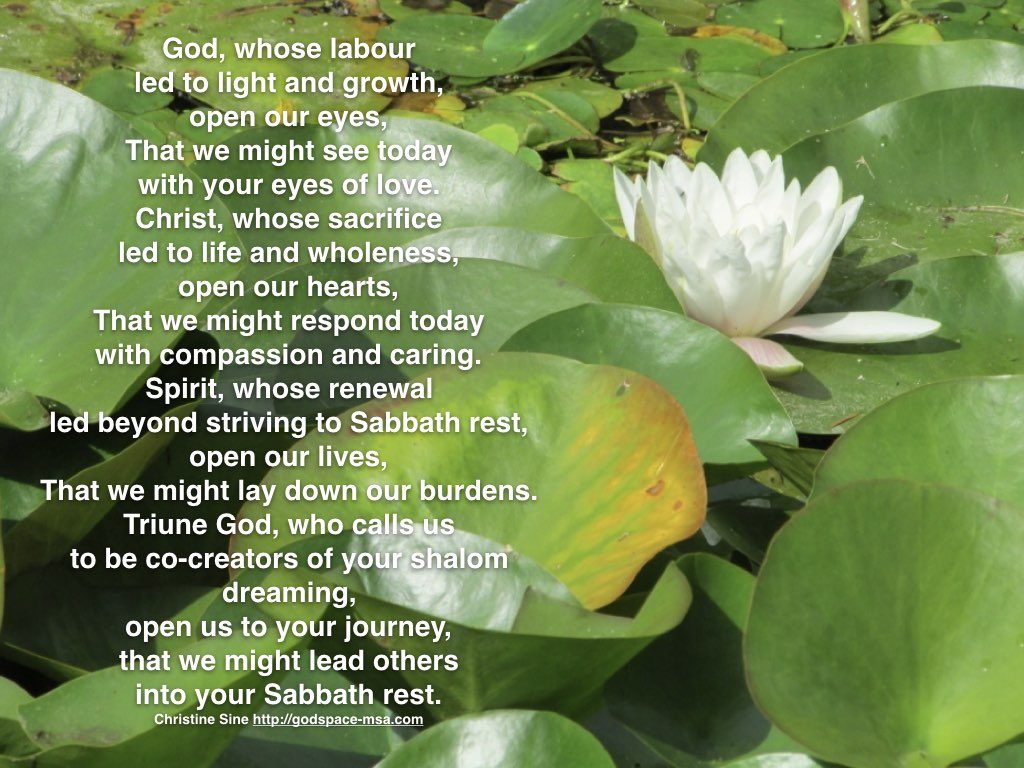 In her book Jewish Days: A Book of Jewish Life and Culture, Francine Klagsbrun introduces us to the wonder of the Sabbath day. She calls it a miracle because no such day existed until it appeared full-blown in the Talmud – and it is the one rhythm of life that has no counterpart in the natural world. She reflects on her father’s impressions of the Sabbath or Shabbat as it is called in Hebrew. “‘When I was a young man, an immigrant from Russia,” he would say, “the United States had no labour laws regulating working conditions. People worked long hours, seven days a week, without rest. But imagine, more than three thousand years ago the Bible commanded that all work stop for an entire day every single week, and not only for the ancient Israelites but for all who lived among them, including slaves. And not only for people, but for animals as well. What a revolutionary practice that was. What a miracle!” Klagsbrun explains, “the rhythm of the Jewish calendar flows around this day of rest and reflection. In every week of every month of every year, the Sabbath arrives to re-create that moment after Creation when God rested and the entire cosmos was in peace and harmony. Shabbat may be a miracle, as my father taught me. It is also a unique gift only fully appreciated when used.”

The celebration of Sabbath rest, is one of the most beautiful rituals in Jewish culture. At dusk on Friday joyous services at the synagogue welcome its arrival. Even before that Jews focus on preparation for this day that is for many, the culmination of the week, the day that sets the purpose for every other day. The ritual greeting, Shabbat Shalom, bridges the close of the work week and the beginning of the Sabbath celebrations. Sabbath is a family event. The woman of the house lights two candles to symbolize the first act of creation, the separation of light from darkness and a canopy of peace and repose descends as the family sings a Sabbath hymn. Then there is a time of blessing – parents bless their children as an act of love and concern, then they pay tribute to each other by singing from the Book of Proverbs. The kiddush, recited over a brimming cup of wine, sanctifies the Sabbath before dinner beings.

There is no better place to connect to God’s rhythms than in the reclaiming of Sabbath and our God ordained need for rest and spiritual refreshment. Evidently in Jesus’ time Romans despised Jews for their day of rest. They viewed it as a sign of laziness, though some did recognize its importance as a time of refreshment for the body to provide renewed strength into the week ahead. From the Jewish perspective however, the Sabbath day is far more than a day of rest to allow our souls to process the data input of the previous week into wisdom – a view which is probably more Greek or Roman than Hebrew. For the Jews, Sabbath is fundamental to life and to both their spiritual and emotional health – it is the culmination of the week, the day that gives purpose to all other days.

Sabbath – a glimpse into God’s delight.

The miraculous and awe inspiring quality of Sabbath is made apparent by Jewish philosopher Abraham Heschel in his book The Sabbath. Evidently ancient rabbis puzzled over Genesis 2:2 “On the seventh day God finished His work” which implies that there was an act of creation on the seventh day. “What was created on the seventh day? Tranquility, serenity, peace and repose.” The rest of Sabbath is far more than the withdrawal from labour and exertion we tend to associate it with. It is the rest and harmony of life as God intended it to be.

For Heschel the essence of the world to come is Sabbath eternal, and the seventh day is a foretaste of that world. One day out of every seven we have an opportunity to glimpse eternity, to experience the joy, the tranquility, the peace and the abundance of life as God intended it to be. No wonder Jesus healed on the Sabbath. No wonder he constantly criticized the legalisms and restrictive rules the Pharisees had inflicted on the people that robbed them of their joy and freedom. He wasn’t downplaying the importance of Sabbath as a holy day, he was giving the Jews a glimpse of what Sabbath was meant to be, the culmination of their week, the goal of all else they gave their time to – a glimpse into the wholeness, and abundance of God’s shalom future when all will be healed, fed and provided for. Imagine what a difference it would make if we all viewed Sabbath as a day for connecting to the joy of fellowship with God, for enriching relationships with others and for enjoying the glories of God’s creation.

Christianity incorporated the spirit and beauty of the Sabbath into its theology. However most Christian traditions transposed it to Sunday, the first day of the week and connected it to the resurrection of Jesus. Early Christians called this the eighth day. Because they believed God began the creation of the heavens and the earth on the first, first day, Christ’s rising on another first day, centuries later meant God was beginning a new creation. The Jews yearned for a future in which Sabbath was not just a day but a way of life seven days a week and in Christ, Jesus followers believed that new world was opened to them. According to David Chidester in Christianity: A Global History “In coming together for collective worship on that sacred day, a day that signified the creation of the world, the resurrection of Christ, and the transcendence of ordinary time, Christians could imagine that they had already entered the new world promised at the end.” Just as the Sabbath was the culmination of the week for the Jews, so Sunday was for Christians. It is meant to be a day that realigns our whole life to God, to our families and others with whom we share this planet, and to creation.

The Sabbath is a day not just to rest our bodies but also to enrich our souls and spirit, a day to recall with joy and gratitude the wonder of our salvation and God’s redeeming activity in our lives and world. This is the day that should shape and give rhythm to the week rather than be molded by it – it is a time for worship, for fellowship with others and for enjoyment of God’s creation but is also a day for reflection and for solitude, a time to study the word of God and connect it to our lives.

In today’s world I don’t think there should be rigid rules for Sabbath keeping. We certainly don’t want to advocate the legalisms of the past. Flexibility needs to be the order of the day. As we change jobs, when our kids leave home or we move to a new city, we may need to reevaluate the practices we establish. In his book Sabbath Time, Tilden Edwards an Episcopal priest who researches Sabbath keeping, urges Christians to be flexible and creative in their embracing of a “Sabbath time” rather than a one day a week observance. He recommends that Sunday be a time to combine worship with play and relaxation and advocates adding a regular rhythm of disciplined spiritual renewal to that during the week.

For many pastors and church workers, Sunday is the busiest day of the week and Saturday or Monday provides a better Sabbath rest. However for most of us Sunday is still the best Sabbath day. If you feel pressure to prepare for the coming week, try starting on Saturday evening. By sundown Sunday Sabbath is over and you can prepare for work. Celtic monks celebrated Sabbath on Saturday. Sunday – the day of resurrection began the new life and work of the week. It began with the Eucharist and celebration of Christ’s resurrection then the monks entered into the work of the week.

Canadians John and Martha found that keeping Sabbath together with two active kids was a bit of a challenge. They decided to give each other a Sabbath break once a month for a day of prayer and reflection. The spouse not on Sabbath retreat spends time with the children. One of the unexpected byproducts is that both parents and kids appreciate each other more after they have been apart for a while.

When we celebrate Sabbath doesn’t seem to matter. What is important is to set aside a day as a holy Sabbath, not just to rest, refresh and connect intimately to God, but in order to glimpse that eternal world for which we yearn – and then to allow the rest of our week and our commitments to be molded by that.

What Is Your Response.

When was the last time you planned a Sabbath break? How could you incorporate this important rhythm into you life?

The Trinity: A Model of Interdependence and Sustainability for a Threatened World