St. Columba (Colum Cille meaning “dove of the church”) was an Irish monk, abbot, scholar, and missionary who spread the gospel of Jesus Christ in Scotland, England, and throughout Western Europe from his monastery that he established at Iona off the western coast of Scotland. His monastery became known as the “Cradle of Western European Christianity.” This scholarly and deeply spiritual Abbey sent out hundreds of monk evangelists who shared the gospel and set up monasteries all over England and Western Europe.  Columba is one of the most loved of the early Celtic saints, even though he often is considered as a “warrior saint.”

Columba grew up in Garten in County Donegal in Ulster. He was a descendant of one of the most powerful royal dynasties of Ireland, the Ui Neill clan of Northern Ireland that descended from the famous Niall of the Nine Hostages. His mother was descended from a king of Leinster. Columba studied under the famous monastic teachers, Finnian of Moville and Finnian of Clonard. As a young man in his mid-to- late twenties, he was ordained as a deacon at Moville Abbey and was later ordained as a priest when he was about thirty years old. By 563AD, Columba had already established several monasteries in Ireland.

It is said that Columba evangelized the local Druids in a similar way that other Celtic saints were famous for by not requiring the local pagans to destroy their old way of worshipping. Instead, the Celtic evangelists gently began the process of transforming the pagan way of worship to become Christ-centered. So, Columba began sharing the Gospel of Jesus the Christ to the Druids by declaring that “Christ is my Druid.”

Legend says that after copying a book of Psalms without permission that belonged to his former teacher, St. Finnian of Moville Abbey, that Finnian demanded the copy, but Columba refused to hand it over. Their dispute was taken to the High King Diarmuid, who ruled “to each cow its calf and to every book its copy” convicting Columba of plagiarism and giving legal copyright to Finnian. This is considered to be the first recorded instance of copyright law. 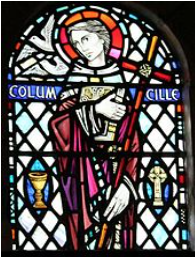 Stained glass in the Abbey of Iona

Columba persuaded his kinsmen to go to battle over this copyright ruling and King Diarmuid was defeated. Columba was blamed for the death of hundreds of men that were killed at this battle. For penance, it was decided by a synod that Columba must convert an equal number of pagans.  So Columba and twelve companions chose to embrace peregrinatio, to pilgrimage for the love of God. In this instance, his pereginatio led him to travel into exile as his penance.

Columba likely sailed with those twelve companions in a typical Celtic coracle of leather and rattan. With no oars, they trusted the Spirit to blow them to wherever the Lord desired Columba to live out his penance.  It is quite appropriate that the crowded coracle landed on the isle of Iona on the day of Pentecost, where Columba began a new of ministry by creating one of the greatest centers of faith and evangelism in Christian history. It is said that when they arrived on the little isle of Iona, near the isle of Mull in the Inner Hebrides off the western coast of Scotland, that Columba climbed to the highest hill on Iona. He must have been in good physical shape to climb that hill, as it is not an easy climb, especially after a long ride in a coracle! When he realized that he could not see his homeland of Ireland from that high hill, he knew this was where he had been sent by the Spirit to be his place of penance and resurrection.

Columba was a not only an abbot, but also a scholar, poet, evangelist, and visionary. Three surviving early medieval poems are ascribed to him. He spent much of the last years of his life copying manuscripts by hand in the scriptorium at Iona. It is thought that he personally copied 300 manuscripts. Some early medieval manuscript scholars claim that the magnificent Book of Kells was hand-copied and gorgeously illuminated about 800AD at the scriptorium at Iona. It is believed by some that Columba also evangelized the Picts in northern Scotland.

Columba lived on Iona for about 36 years and died on June 9, 598 at age 76 while copying Psalm 44. A favorite, yet poignant story relates that the aged Columba was out walking one afternoon and he grew weary. As he sat down by the roadside to rest, his beloved white horse who carried milk for the monastery came to him and laid his head upon the saint’s chest and tears flowed from the horse’s eyes as he bade farewell to the master he knew was dying.

Today, pilgrims journey from all over the world to Iona, this “Thin Place,” where the veil between earth and heaven seems almost gossamer. The Iona Community, an ecumenical inclusive community based on peace and justice founded by Rev. George McLeod in the late 1930’s continues to draw people of all ages and from all cultures to stay, work, and worship on Iona.

Let us pray: Christ my Druid, I open my heart to you. May You be born again anew in my life. Shine Your healing light upon those broken, messed up places in my life, just as You did for Columba. Re-mold and remake me. Thank You for second and third and fourth chances. May the dove of peace fill my life and the lives of all creation.

“And now,
may kindly Columba guide you
to be an island in the sea,
a hill on a shore,
a star in the night,
a staff for the weak.”
Amen and amen.
-Gaelic oral tradition