My husband, Dave, now has a chronic lung disease, a form of chronic obstructive lung disease, often called COPD. Watching him suffer has been one of the hardest things I have ever experienced.

About a year ago, I decided I needed help in coping with the stress of his disease (and a few other stressors), so I started seeing a therapist twice a month. My times with him have been very helpful, and in these next few blog posts, I want to reflect on what I’ve learned.

Before I start, I’ll tell you a bit about Dave’s situation. His life is diminished by his disease because his energy is lower and he is prey to frequent lung infections, but he is still himself and still one of my greatest joys and sources of support. My marriage remains a big net positive in my life, a huge blessing. Still, last year I could tell that watching him suffer was causing me stress on a daily basis, and watching him deal with fevers when he has lung infections was tearing my heart up.

Let me tell you about my typical response to his illness when I entered therapy. I was feeling and thinking a bunch of stuff: feeling sad to see all the adjustments Dave has to make, worrying about how the disease will affect him and me in the future, wondering how long he will live, hoping he’ll live a long time for my sake but wondering if it wouldn’t be better for him to die for his sake so his suffering would end, feeling guilty for having thoughts that dying might be better for him, worrying that I’m not trusting God enough with my thoughts and fears, etc., etc.

The first suggestion my therapist made was to separate the thoughts from the feelings. No one had ever suggested this to me, and I now see this as a spiritual practice, a choice that needs to be made over and over. In this series of blog posts, I’ll tease out what that looks like in practice. To begin, I’ll write about the difference between thoughts and feelings.

Feelings are a normal, healthy part of daily life. Of course I would feel scared, sad, and angry because Dave is dealing with a chronic condition. What loving person wouldn’t feel that? 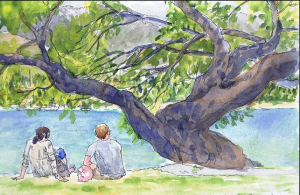 But the catastrophic thoughts – What will be the trajectory of the illness? When will he die? What will it be like to be a widow? – are demonic, according to my therapist. They are literally demons that pursue and enslave me. They damage my life.

My therapist suggested dealing with the thoughts like a person would deal with distractions during meditation or contemplative prayer. Imagine them as leaves floating down a river. Let them go. But the feelings are to be felt.

Always before, I saw coping with my swirling thoughts and feelings as a black or white thing: either I’m disciplining my mind to have positive emotions and thoughts, or I’m being honest and feeling/thinking about the negative stuff. The choice was optimism or honesty.

Now I have a different perspective. I see that “honesty” is not the right word to describe catastrophic thoughts about the future. My thoughts focus on things that haven’t happened yet, so they cannot be honest or dishonest. Catastrophic thoughts are simply unhelpful and dysfunctional, which makes them demonic. And indeed, they do demonstrate lack of trust in God.

However, “honesty” is the right word to use to describe experiencing feelings. When I feel sad, scared, angry and/or guilty about Dave’s illness or about anything else, I need to know what to do with those feelings. Those feelings are indeed present. They are a part of me. I find trying not to feel them simply doesn’t work.

Freerange Friday: On the Way to Pentecost Take Time to Breathe

A Little Reflection on Genesis 1

So very very helpful! Bless you for sharing this. I look forward to the series.

This connects to some self-work I’m engaging in at the moment in an adjunct way – kudos for your willingness to be vulnerable in a public way! I think sometimes people might see this as “weakness” but I see it as sharing what strengthens you in the hope it might strengthen others which is about having resource and resiliency. I admire your courage and look forward to reading the rest of the series.

Lynn, thank you for sharing and for your vulnerability. I had no idea Dave was dealing with COPD and will be praying for him and for you. The idea of separating thoughts from feelings is really helpful. I hadn’t thought of it quite like that before but it makes a lot of sense and is helpful in sorting out all the things swirling through one’s mind in times of crisis and anxiety. Thank you!