ST. BRENDAN THE NAVIGATOR for Feast Day, May 16

Have you ever met someone from Christian history that has captured your imagination and has influenced your life? Like you, I too have had that experience.

About seventeen years ago, while in seminary, I became enamored with the Celtic and Anglo-Saxon saints and the idea of peregrinatio, the desire to travel to the place of one’s resurrection and to experience personal resurrection not only in heaven, but also on earth. This journey would be dependent upon Christ as their companion and guide. During the early days of my pilgrimage into Celtic Christianity, I came across the great Irish saint, Brendan the Navigator, also known as St. Brendan of Clonfert. I was smitten and I just knew I had met a soul mate through that thin veil of the ages.

There are two aspects of this saint that pulled at my heartstrings. First of all, St. Brendan seems to have been possessed with the DNA for wanderlust, like many Celtic saints both past and present. I too seem to have born with the powerful pull of wanderlust.  My parents used to joke that my middle name was “go.” St. Brendan and his disciples would construct a coracle, a boat with a basket-like frame of wood, covered with animal hides softened with butter, and covered in pitch. Then these voyagers would fast and pray, clamber into their little handmade boat with St. Brendan saying as they set sail: “Is not the Lord our captain and helmsman? Then leave it to Him to direct us where He wills.”

Secondly, I have a name very similar to his, “Brenda.” I have always been more than a bit ambivalent about my name as it seemed that only 1950’s TV stars with teased and overly sprayed beehive hair had this rather unsophisticated name.  Having a name derived from St. Brendan’s has provided a better appreciation for the moniker carefully chosen by my parents.

As I began to read and study more about my namesake, I discovered that Brendan was born about 484 AD to Christian parents, Findlug and Ciara in southwestern Ireland in County Kerry near Tralee. As is typical of early nativity stories about Celtic saints before their birth, his mother had a vision that the child in her womb was filled with the Spirit. On the day of his birth, Bishop Erc, who was baptized by St. Patrick, saw Brendan’s birthplace aglow with an angelic presence surrounding that place and immediately he went there to hold this very special baby. This little one was first named Mobi, but his name was changed to Braenfiend (Brendan) meaning “fair drop or white mist.” 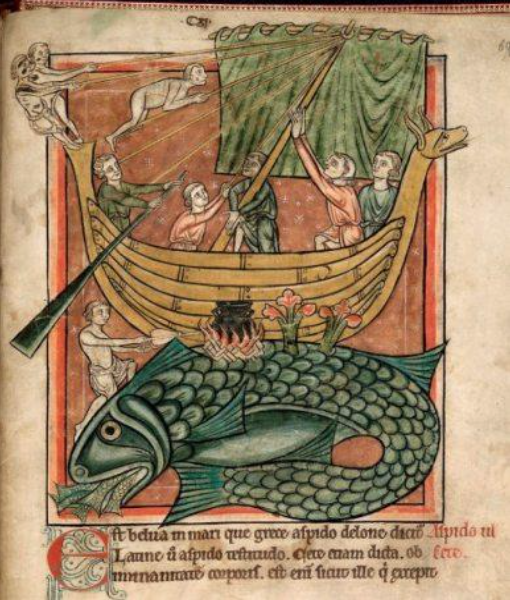 Bishop Erc at Ardfert baptized Brendan.  This Bishop who was known as one of the founders of monasticism in Ireland would later become Brendan’s mentor teaching him both Latin and Hebrew.  Yet as a young child, he was given by his parents to Abbess Ita of the convent of Kileedy in County Limerick to be trained and educated for about six years. Like the Druids, St. Ita taught in triads. Brendan is believed to have asked her what three things God loved best and she answered: “Faith in God with a pure heart, a simple life with a religious spirit, and generosity with love.” She also told him the three things God most detested were a scowling face, obstinacy in wrongdoing, and too great a confidence in the power of money.

Brendan had that Celtic need for travel and to explore.  His Bishop Erc eventually gave him permission to leave the monastic lands, but Brendan had to promise to return so that the Bishop could ordain him. On that first journey, Brendan travelled to Skellig Michael, Arans, Strathclyde, Cumbria, and maybe even Wales.

Brendan then set up his famous monastery at Clonfert in about 559.  It has been said that at one time there were 3,000 monks in residence there. He later founded other monasteries including Ardfert in Kerry, Inishdadroum in Clare, and Annaghdown in Galway where his sister Brig was the Abbess.

With that wanderlust still burning in his soul, Brendan yearned to find the Promised Land of the Saints.  On this adventure he and his fellow voyagers encountered all kinds of interesting sea creatures and scary sea monsters. They even celebrated Easter on what they thought was an island, but it was a whale! They later came upon something they had never seen before, an iceberg. These Celts with a great love for God’s magnificent creation were so amazed by this gigantic ice island that they spent a whole day inspecting and measuring this phenomenon. Brendan declared, “let us inspect the wonders of God, our Maker.” It was on this journey that it is thought that Brendan and his crew even travelled to Iceland and North America, discovering them long before the Vikings or Christopher Columbus.

Adomnan, an historian and early Abbot of Iona wrote that Brendan even visited the famous St. Columba of Iona on the island of Hinba and St. Malo in Brittany. He also travelled to Brittany in France and the Orkney and Shetland Islands off of Scotland.

At the end of Brendan’s life in 577 or 578, he blessed his sister Abbess Brig and his followers, committed his spirit to God, and then died at his church at Clonfert. He is considered to be one of the Twelve Apostles of Ireland.

Perhaps you too have discovered a saint or a person in Christian history that has touched your life. You may even have a similar name to a saint that you admire. When a saint captures your imagination, pay attention to this little tug at your heart. This may be a calling into a new soulful season of your life’s pilgrimage.

Let us with great faith and a bit of Brendan’s adventuresome spirit clamber into our little coracle and ask the Spirit to blow us to places we never dreamed or imagined!

Rev. Brenda G. Warren is an ordained Christian Church (Disciples of Christ) pastor. She invites us to journey with Celtic and Anglo-Saxon saints at www. saintsbridge.org.

Space and Grace: Exploring the relationship between creation and restorative prayer