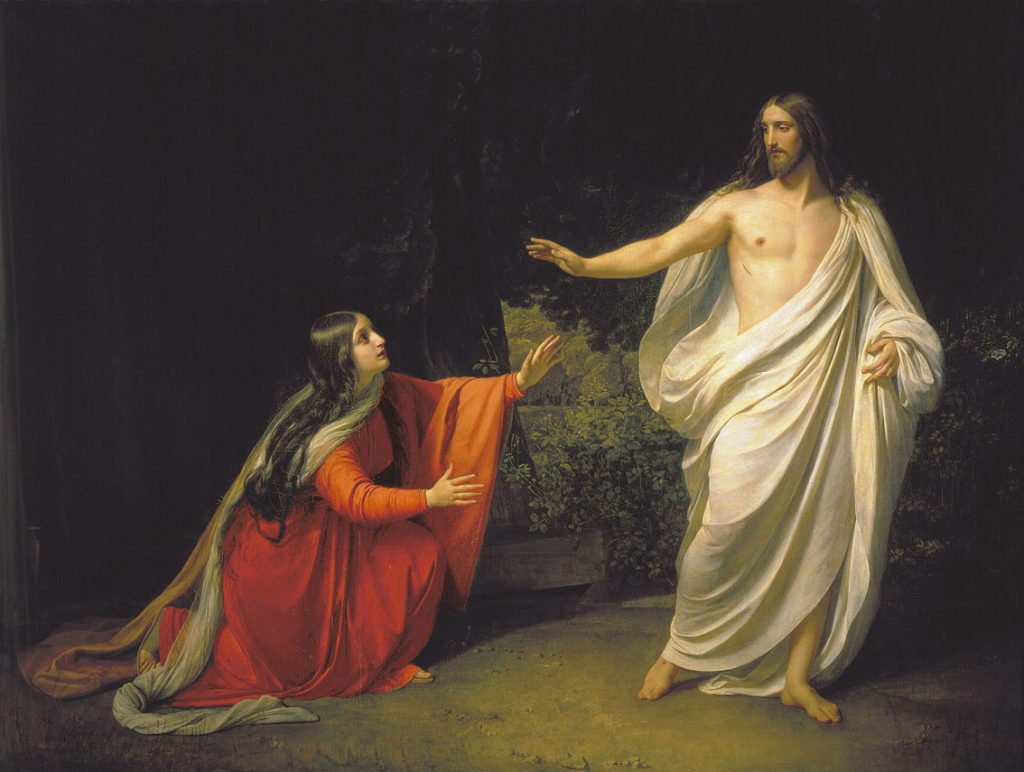 Jesus appearing to Mary Magdalene after his resurrection from the dead, depicted by Alexander Andreyevich Ivanov (Public Domain)

Mary Magdalene has become one of my favourite New Testament figures. She is also one of the most misused and abused a fitting symbol for women throughout the ages who are still misused abused and blamed. Mary Magdalene was one of Jesus’ most dedicated followers. She was present at his crucifixion and the first to see Jesus after his resurrection. Yet what most of us believe when we think of Mary Magdalene is a “fact” for which there is no evidence.  She is remembered as a prostitute rather than as the faithful first bearer of the Good News.

Why do we so easily believe this? Part of it is because there are so many Marys mentioned in the New Testament that it is confusing. However, though her prominence in the story of Jesus probably began to deteriorate shortly after her death, the transformation to penitent prostitute was only sealed on Sept. 14, 1591, when Pope Gregory the Great gave a homily in Rome that pronounced that Mary Magdalene, Luke’s unnamed sinner, and Mary of Bethany were, indeed, the same person.

We easily forget or ignore the fact that women played a prominent part in the leadership of the church Sadly as Christianity became more mainstream it also became more patriarchal and the roles of women as disciples, elders and leaders (some even say as apostles) was quickly overlooked or reinterpreted.

We still like to think the worst of women and want them to “keep their place”.  Like most women in leadership I am quite familiar with this. As a young doctor I was told it was wrong for me, a single woman to earn more than a married man, and I was, on several occasions, refused positions of leadership just because of my gender.

The church is often at the forefront of abuse and discrimination. When Sarah Bessey started a Twitter conversation using the hashtag, #ThingsOnlyChristianWomenHear on April 18 it took off in a way few expected and the conversation is still rippling round social media. Women shared stories of rape, abuse, and sexism in the church and how the bible was used to justify these things and keep them quiet. Men blamed women for not submitting to their husbands or leaders or just for wearing provocative clothing. “They deserved to be raped” some said.

The discussion about pregnancy and health insurance here in the U.S. was the final straw for me. So many inequalities still separate women from men in almost every country in the world and it seems to me that our present political environment exacerbates it. Prior to the Affordable Care Act women often paid more than men for the same coverage but health insurance for pregnancy, labor, delivery, and newborn baby care became mandatory in 2014 under Obama’s plan. That could soon change however and when women are at their most vulnerable they could once more be made to suffer financial hardships. It’s not as bad as when masters could impregnate their servants and then throw them out onto the streets but it seems to have some of the same flavor to me.

As you can tell this is an issue that is very upsetting for me and I pray that you will forgive me. However I believe that Jesus brings the freedom of equality to all persons and where we see inequality we all need to speak out. As Galatians 3:28 says There is neither Jew nor Gentile, neither slave nor free, nor is there male and female, for you are all one in Christ Jesus. Biblical scholars have told me that this was one of the creedal texts of the early church, so why do we not believe it? The gender gap is still very obvious not just in our world, but in God’s family.

Prayerfully consider your own response firstly to Mary Magdalene and then to women in your life. Are there misconceptions in your views of them? Are there ways in which you discriminate against women by not treating them as equals? How would God have you respond.

I was an Elder’s Wife

Call the Midwife, or Not

The Patches Make It Beautiful by Christopher Heuertz

Forgive you for what?
Thank you for your words, and for keeping the subject alive in people’s minds.

I wholeheartedly agree with Rachael. Yours is a very well-written, timely and important article. Thank you.

Thanks Patricia. I appreciate your feedback.

[…] I also love to reflect on some of the strong women in the Bible who are increasingly providing role models for me and other women. Women like Mary Magdalene whom I talked about in my post Why Do We Abuse Women?  […]