John of Beverley was the scholarly Bishop of Hexham for 33 years and later was consecrated as the Bishop of York in 705. He was also known as a great preacher, evangelist, teacher, and miracle worker.

Throughout the years, John of Beverley has had numerous devotees including the great mystic and 14th c. anchoress Julian of Norwich. She described him as “a kind neighbor of pure knowing.” The famous scholar Alcuin had a strong devotion to John. In Alcuin’s poem on the saints of York, he wrote of the numerous  miracles of John.  Even King Edward I and King Henry V were also devoted followers of John. Henry V attributed his win at the Battle of Agincourt in the 15th century to the help from John. It is said that on the day of the battle, that blood and oil flowed from John’s tomb. 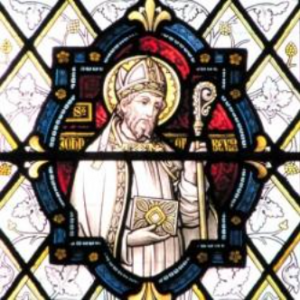 John was not only a Bishop, but he was also a miracle worker.  What we know about Bishop John derives mostly from The Venerable Bede’s Ecclesiastical History of the English People. Interestingly, since Bede lived at the famous Jarrow Abbey, which was under the jurisdiction of the Bishop of Hexham, Bishop John ordained Bede. This ordination  first occurred when Bede was nineteen years old as a deacon and then as a priest at age thirty.  Bede had a life-long admiration and affection for his Bishop.

Bede who included the stories about St. Hilda of Whitby in his Ecclesiastical History, quite likely learned about her from John of Beverley. He had trained under her at her double monastery at Whitby. John was one of five bishops that were trained by St. Hilda.

One of the more intriguing miracles performed by John was of a young man who was not able to hear or speak and whose head was so covered in scabs that no hair would grow on his head. John prayed over the boy and placed the sign of the cross on his tongue. He also worked diligently with the boy to teach him to speak the letters of the alphabet and to be able to say “yes” and “no.” This young man was later able to speak in syllables and then in words. So, this was an incarnational miracle: human and divine working together.  With this miracle, John became the patron saint of those who are deaf. Many more miracles are credited to John, not only in life, but also in his death.

John’s life is not only recorded in Bede’s work, but also in later more embellished biographies and hagiographies by Folcard,  John Leland, and William of Malmsebury among others who partially based their works upon Bede’s earlier work.

John was likely born to a noble family in Harpham in East Riding of Yorkshire just a few miles north of Beverley, but we do not know the exact year or even the decade when he was born.  Bede says that John lived to be a very old man and that he died in 721. So, John may have been born in the first half of the 600’s.

Three years before John died at a ripe old age, he resigned as Bishop of York and he consecrated his successor, Wilfrid II, as the new Bishop. St. Hilda of Whitby had also trained Wilfrid II. John then retired to the monastery he had founded in a secluded spot called Inderawuda, meaning ‘in the wood of Deira’. This Inderawuda is considered to be Beverley, as at that time this little village was very wooded and was an island in the middle of a lake. The name “Beverley” likely means “beaver stream or lake.”

John’s church at Beverley had special sanctuary rights which were likely more extensive than those of other churches during this time. This generosity has opened the way for fugitives and refugees to flock to St. John of Beverley throughout the centuries. This good-hearted Bishop lived out the words of Jesus the Christ,  “when you have done it to the least of these, you have done it to Me.” (Matthew 25:40)

Bede records that John died on May 7, 721. He was buried at his monastery church in Beverley and almost immediately after his death, Beverley became a place of pilgrimage. Pilgrims from the early Middle Ages all the way until the Reformation flocked to his shrine to see his relics and to pray for miracles.

John likely left behind numerous writings that have been lost over time. Robert Bale who died in 1503, recorded that several of John of Beverley’s writings were in Queen’s College in Oxford.

1,300 years later, John of Beverley’s life is still remembered and celebrated. The feast of St. John is celebrated on the Thursday nearest May 7, when the choir and members of the congregation of Beverley Minster go to the church of John’s birthplace at Harpham. There is a procession to the flower festooned well of John. After singing an anthem and praying, the congregation returns to the church for choral evensong.

The annual celebration continues on the Sunday nearest May 7, with the dignitaries of the city dressed in full regalia, led by macebearers processing to the West Door of the Beverley Minster.  After the service, the children from Harpham place primroses that they have gathered from the woods on John’s tomb.:/

World Labyrinth Day – Walking the Labyrinth with the Psalms