QUEEN BERTHA OF KENT, A PREPARER OF THE WAY

QUEEN BERTHA OF KENT, A PREPARER OF THE WAY

Aren’t we grateful for those who prepare the way for us? Jesus had his cousin John the Baptist who walked ahead of him and prepared the way by plowing the hard hearts of the people and allowing the seeds planted by Jesus to grow, to flourish, and to come to fruition. Queen Bertha of Kent, in the likeness of John the Baptist prepared the way for Anglo-Saxon England to receive the Gospel.

Bertha was a Frankish princess who was likely born about 539 and brought up in Tours, France. Her father was Charibert I, the Merovingian King of Neustria, which was the western part of the Frankish lands with its capital in Paris. Her mother was  Ingoberga, the first wife of Charibert I. Ingoberga was known for her Christian piety and a generous supporter of the church in Tours. Bertha was also the great-granddaughter of Clovis, the founder of the Merovingian dynasty of France and his wife Clothide who aided in the conversion of her husband to faith in Christ. 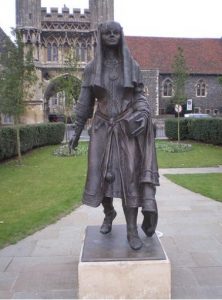 The Venerable Bede described Bertha as the “of the royal stock of the Franks.” This would have made her marriage to the pagan Anglo-Saxon King Æthelberht of Kent in England a great bonus to both the Anglo-Saxon king and to the Merovingian line in France. This marriage was likely brokered by King Chilperic of France who would have used the daughter of his deceased half-brother to extend his influence across the English Channel.

Bertha’s marriage to King Æthelberht was conditioned on her being allowed to practice her faith in Christ. To ensure that this stipulation was met, she brought her chaplain, Bishop Liudhard with her to England. Interestingly, in  1844 in the churchyard of St. Martin’s a late 6th c. gold coin or medal was found with an attached loop along with other gold coins in a late 6th c. grave. This gold piece bears a head surrounded with letters spelling out in mirror writing in Latin “Leudardus Episcopus” (Bishop Liudhard). It now resides in the World Museum in Liverpool.

Queen Bertha and Bishop Liudhard restored a Roman occupation era Christian church in Canterbury  which had been dedicated to St. Martin of Tours. It became her private chapel even before Augustine arrived from Rome. The present St. Martin’s of Canterbury continues in the same building. It is the oldest church in the English-speaking world and is part of the Canterbury World Heritage site.

Much of the favorable reception that Augustine received for his mission when he was sent by Pope Gregory I to preach the gospel to pagan Anglo-Saxon England in 597 is owed to the influence of Bertha. Pope Gregory wrote to the Eastern Church’s Patriarch of Alexandria, Eulogius, reporting that by Christmas 597 more than 10,000 English had been baptized in just a few short months.  In 601, Pope Gregory addressed a letter to Bertha, in which he compliments her highly on her faith and knowledge of letters.

Anglo-Saxon records indicate that Queen Bertha had two children: Eadbald who later became King of Kent and Æthelburga of Kent who married King Edwin of Deira (later part of Northumbria). King Edwin’s conversion to Christianity was linked to his marriage to Æthelburga who brought her chaplain, Paulinus, with her to Northumbria. Paulinus baptized Edwin and all of his family including both the young Hilda, the future St. Hilda of Whitby,  and her sister, Hereswith, at the hastily built minster in York.

We can only imagine how difficult it must have been for this young Frankish princess to travel to another country to marry a pagan king she had never met. This marriage must have even been more difficult as she likely did not know the Anglo-Saxon language. Her faith and her chaplain helped guide her through this maze of unknowing into a place in which she prepared the way for Anglo-Saxon England to come to faith in Christ.

The strong women of faith in Bertha’s lineage were transformational to the kings and to their lands as preparers of the way of Christ.  Bertha’s Burgundian great-grandmother Clothilde helped convert her husband King Clovis of France to faith in Christ. Queen Bertha herself aided in the conversion of her husband King Æthelberht of Kent and prepared the way for St. Augustine’s reception to preach the gospel in England. Queen Bertha’s daughter, Queen Æthelburga helped convert her husband King Edwin of Northumbria to Christianity that brought faith to this area of England.

Thank you God for sending those ahead of us to prepare the way for us to do the work you have sent us to do. These soul preparers are a sacred and holy gift from the Spirit and we thank you.  Amen.

Today, we can walk on a path in Canterbury in honor of Queen Bertha as there is the Bertha Trail also known as the Queen Bertha’s Walk. This trail consists of fourteen bronze plaques set in pavement that includes St. Martin’s Church, St. Augustine’s Abbey, and Canterbury Cathedral.

Rev. Brenda G. Warren is an ordained Christian Church (Disciples of Christ) pastor.  Her passion is for the early Celtic and Anglo-Saxon saints that she writes about on her website: www.saintsbridge.org. A bibliography of St. Bertha of Kent is available on the website.

Meditation Monday – New Horizons That Want to Be Seen

Life as a Gardener