A story of shame, servanthood and awe-inspiring love 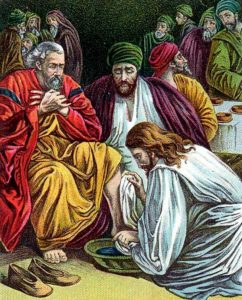 You want to hear about the Last Supper, do you? It’s a bit of a sore point for me, because I still grieve for the spiritually blinkered, inept disciple I was that night, and what I missed, hidden in plain sight. Having already proved myself to be impetuous in thinking I could walk on water like Jesus does, I became incredulous at the thought of him dying on a cross, never mind washing my grimy feet.

Yes, you heard that right. The God of the whole universe knelt at my soiled feet, tenderly washing and drying each foot as an act of supreme submission and love, when I should have knelt at His, especially after acknowledging Jesus as the Christ, Son of the living God.

I’d scoffed at first, dismissing washing feet as a weird idea for our revered Teacher to implement. Once I realised it was a sign of being united with Him, why I wanted to Him to wash so much more, of course—silly, wholehearted, young fool that I was! Now I’m amazed how blind I was to this act of sublime humility, little knowing just how much it would mean to me, and all it implied about God’s surrendered, sacrificial love.

I knew nothing of holy servanthood, whereby the path to the cross would be paved with stepping stones of love. I was ignorant of my own supreme arrogance in assuming I would remain loyal to the end and how, before many hours had passed, I would reveal myself to be a craven coward denying all association to my Lord.

These things still make me hang my head in shame. It’s a wonder and glorious act of grace that Jesus chose to reinstate me. Not only that, I gained a commission and a passion to live for Him to my own dying days, finally becoming a man who could be courageous.

We were sombre together that night, though we could barely comprehend what it would mean for Jesus to save us by dying an excruciating death on a cross. Our low mood was heightened by wondering which one of us would be capable of betraying Jesus, as He had suggested—an act so heinous we fearfully examined our hearts with a guilty conscience, aware of our own propensity for sin.

Later on, the bread and wine of our new covenant communion would take on special significance, reverberate with sacred awe and holy reverence, as we considered the beaten, bloodied, broken body of our Saviour crushed like pressed oil and grapes of wrath, made drink offering and manna bread for us, and all who would follow Him.

We would replay every moment of that last day and all that happened thereafter, cursing our own lack of awareness and culpability in contributing to putting Christ on the cross, while we wondered anew at God’s great, sacrificial gift to fallen humanity.

And as you know (for it’s a tale I’ve often told), extraordinary events followed hot on the heels of that night. Earth and heaven joined hands, were shaken to the core, with a tomb broken open by angelic means and the Lord Jesus Christ freed from death’s confines, raised for evermore.

Later, fearful, spineless disciples were turned into faith-filled, ardent apostles. But that’s a tale for another day. This is all you’re getting tonight, I’m afraid. Old Uncle Peter needs his rest. It’s time for sleep now. May your dreams be sweet, my friend.

**To read about the significance of Maundy Thursday, how it is named and celebrated differently around the world, please click here… **

FreerangeFriday: A Mini Retreat for the Season of Easter

What happened on Holy Saturday?

Labyrinth Walking for All Of Us

Meditation Monday – Questions from a Labyrinth

On the way to Easter ….Rebooting Lent!

The Spirituality of Drinking (Chinese) Tea

Change is Happening at Warp Speed, Can Your...

What Happens When Our Gifts Are Unappreciated?

Thank you for sharing this beautiful perspective on Peter’s last days with Jesus. I especially was moved at this thought he brought out: “Earth and heaven joined hands, were shaken to the core, with a tomb broken open by angelic means and the Lord Jesus Christ freed from death’s confines, raised for evermore.” There are such depths of truth to be pondered in that one sentence! May my heart be opened more to what my Lord has done for me! Blessings and Love to you, dear Joy!

Bettie, it was a bit of a departure from the norm for me to write in such a storytelling style, though I have ventured into that territory before. And to hear how it speaks to you so movingly encourages me to try my hand again! Thank you for reading and leaving a lovely, reflective comment. I’m so pleased you found something in these words to ponder on. I, too, pray for my heart “to be opened more to what my Lord has done for me.” There’s no better time to have such thoughts than during Holy Week. Blessings and love to you, dear friend! <3