Wine, Cheese, Chocolate and Jesus! This has been our invitation to thinplace for the past few years. My husband Rob and I have hosted a thinplace gathering in our home in Cincinnati, Napa Valley and now here in Nashville. thinplaceNASHVILLE happens on Sunday nights. We start with dinner, sometimes a potluck, wine and cheese, and always chocolate. After dinner, we move from the table to the living room and I pass out clipboards, copies of the scripture and any art supplies that folks want to use. The second part of our gathering is a time for journaling and art based off a passage of scripture. We open by praying a psalm together and then doing a lectio divina on a passage usually from one of the Gospels.

We listen to a passage in two translations, one being The Message. After listening to the passage and allowing the Holy Spirit to highlight something for us, we have 30-45 minutes to just be with the passage and be with God. I write several questions to consider while journaling and I have art supplies if people want to create a response to the passage. During this time, there is a peaceful instrumental playlist playing as a backdrop. Before we begin, I always remind us that there is no wrong way to do this process.

Some one might be inspired by the psalm, rather that the gospel and that’s fine. The Holy Spirit might take someone in a totally different direction than either the psalm or the gospel passage and that’s ok too. After the journaling/art time is completed we open up the space for sharing but there is no requirement to do so. During the journaling people ponder the questions, write poems, create drawings or just sit with the text. Some people use their phones to find out more about the people or places in the passage or dig a little deeper in another translation of the Bible. When everyone who wants to share has had the opportunity, we close with an experiential element that ties the story to our real lives, often it is something that we can take away to remind us of the passage or remind us to pray. I actually call these symbols and/or responses “Take Aways.”

This past week we used the lectionary passage from Ezekiel 37:1-14 as our lectio/ listening passage and had the gospel passage from John 11:1-45 the story of the raising of Lazarus as something that could be read during the journaling time. Each story focuses on bringing life back from death. The dry bones in Ezekiel need the breath of God breathed back into them. And in the story of Lazarus, Jesus commands his friend to come forth from the tomb and he does, still wrapped in his burial cloths. Both stories also remind us that we too need resurrection and to be unbound from our grave clothes.

As our closing, we passed around strips of muslin and a bowl of mixed spices: cinnamon, cloves and allspice. Each person took a strip of muslin and rolled it in the spices and then made a bracelet from the muslin strip. We are wearing these bracelets as a reminder of our need to be set free and our own need for new life and resurrection. They also remind us of the burial of Jesus and we will cut them off on Easter Sunday as a symbol of resurrection.

The grave cloth bracelet is a great take away, experiential response that you can do on your own, with your family, with your roommates, your small group or even your entire church community on Good Friday. You might even have some people over for dinner sometime during the week and talk about where they might be feeling “dead” or in need of new life. All you need are enough muslin strips (cut 10-12 inches long so they can be easily tied) some small scissors for trimming the bracelets, a bowl with a mixture of cinnamon, all spice and ground cloves. The bowl needs to be big enough to roll the strip of muslin in easily.

The grave cloth bracelet response is originally from Station 14 in my Experiential Stations of the Cross that you can download at freerangeworship.com. 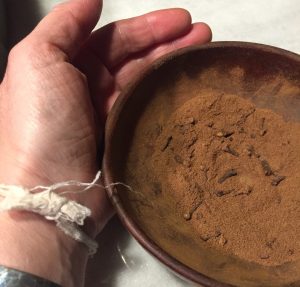 Jesus is Laid in the Tomb
This all happened on Friday, the day of preparation, the day before the Sabbath. As evening approached, Joseph of Arimathea took a risk and went to Pilate and asked for Jesus’ body. (Joseph was an honored member of the high council, and he was waiting for the Kingdom of God to come.) Pilate couldn’t believe that Jesus was already dead, so he called for the Roman officer and asked if he had died yet. The officer confirmed that Jesus was dead, so Pilate told Joseph he could have the body. Joseph bought a long sheet of linen cloth. Then he took Jesus’ body down from the cross, wrapped it in the cloth, and laid it in a tomb that had been carved out of the rock. Then he rolled a stone in front of the entrance. Mary Magdalene and Mary the mother of Joseph saw where Jesus’ body was laid.

Mark 15:42-47
Take a strip of cloth and roll it in the spices. Now Make a bracelet with the cloth.
Allow the smell of the spices and the strip of cloth to remind you of Jesus’ death and burial.
Wear it until Easter and then cut off the bracelet and as symbol of resurrection. Or you might wear it longer and Cut it off when you feel you’ve experienced resurrection in the next few weeks.

FreerangeFriday: Don’t hold on to too much stuff

What We Hold – Part One

Freerangefriday: Having Jesus over for Dinner

I love the idea and the format of your thin places gathering. The spiced muslin bracelet is a great idea too. Thank you