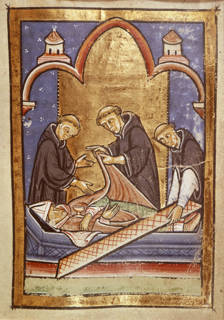 St. Cuthbert’s body found to be incorrupt when his tomb was opened. Illustration from British Library MS Yates Thompson. The 46 full page miniatures include many miracles associated with Cuthbert both before and after his death. Photo from Wikipedia

Lindisfarne is a tidal island on the coast of Northumberland that is cut off from the mainland by water at certain times of the day. A priory was established on Lindisfarne by Irish monks from the isle of Iona with Aidan as the first Bishop.

We are grateful for The Venerable Bede who was a monk at Jarrow Abbey, one of the twin monasteries of Wearmouth-Jarrow in Northeast England. In the early 8th century he recorded much of England’s early church history in his Ecclesiastical History of the English People that included extensive information on the life of St. Cuthbert.

Cuthbert was born about 634 AD and grew up in southern Scotland, near Melrose Abbey.  It is said that on the night that St. Aidan, the first Bishop of Lindisfarne died, that Cuthbert saw a vision of Aidan’s body being carried to heaven which led him to sense a call to become a monk.

Soon after that life-transforming vision, Cuthbert became a monk and entered Melrose Abbey. He later transferred to Ripon Abbey and then returned to Melrose Abbey. From there, the 31 year old Cuthbert went to Lindisfarne as Abbot about 665 AD.

As the newly installed Abbot, Cuthbert inherited a significant problem in which he skillfully and prayerfully dealt. Just a few months earlier, the famous Synod of Whitby in 664 AD was held. At that synod, the Celtic way of Christianity represented at Lindisfarne was voted down in favor of Roman Christianity. Colman who was the third Bishop of Lindisfarne and was present at this synod, was so disgusted at the outcome of this important meeting that he left Lindisfarne and took several of his monks with him back to Iona and then later to Inishbofin, Ireland.

Abbot Cuthbert masterfully guided this seismic transition at Lindisfarne from the Celtic way of Christianity to the Roman way. This nerve-wracking time must have been stressful on this Abbot who was more comfortable as a hermit than as a leader. Soon, Cuthbert began to seek the solitude of retreat to renew his spirit. He would often row a little boat to one of the isolated Farne islands about three miles away where he established a small hermitage for himself.

After serving faithfully as Abbot of Lindisfarne for eleven years, Cuthbert retired in 676 to permanently live on the Inner Farne in his little hermitage. He experienced nine years of peace as a hermit before he was called (begged!) out of retirement by King Ecgfrith and a band of other leaders to become the Bishop of Lindisfarne. He reluctantly accepted this call and was ordained by Archbishop Theodore at York on Easter, March 26, 685, but less than two years later, at Christmas he decided he had enough of a good time and moved back to his beloved Inner Farne.

Cuthbert predicted his own death and he died on the Inner Farne on March 20, 687. He was buried at Lindisfarne, but in the mid- 800’s to protect his remains from the Viking onslaught his sarcophagus began traveling. He was carried by the monks of Lindisfarne throughout Northumbria.

Cuthbert’s body finally rested for a long while at the church of St. Mary and St. Cuthbert at Chester-le-Street, but his final resting place was Durham Cathedral, where his body still remains in a shrine. It is a powerful experience to sit and contemplate beside Cuthbert’s shrine. Also in Durham Cathedral, one can visit Bede’s shrine.

It is likely that Cuthbert’s tomb was opened several times before 1104 when the relics that were found inside were recorded. In 1104, they found a small book of the Gospel of John, now known as St. Cuthbert’s Gospel measuring only three-and-a-half by five inches. It was incredibly found lying at his head! Even the original goat leather red Celtic bookbinding was still intact. Scholars believe that this was not Cuthbert’s personal gospel book as it was likely handwritten after his death, sometime between 710 and 730 AD.  It was probably added to the sarcophagus at an earlier opening of his tomb. This little gospel book formerly known as the Stonyhurst Gospel, was likely penned at the Wearmouth-Jarrow Abbey where Bede spent his life. It was purchased in April 2012 by the British Library for $14.3 million (9 million British Pounds) and is now known as St. Cuthbert’s Gospel book.

Also found during this early 12th century opening of the sarcophagus was a set of 10th century vestments placed by King Æthlestan while on a pilgrimage to Cuthbert’s shrine at Chester-le-Street. These vestments were made of Byzantine silk with a stole decorated with Anglo-Saxon embroidery. Also, in his coffin was a stunning gold, garnet, and shell pectoral cross on his body. In addition, Cuthbert’s personal portable altar table covered in silver was discovered along with a comb, scissors, and an onyx chalice with a gold lion.

At some point Cuthbert’s simple wooden sarcophagus was later encased in a fine coffin covered with gold, silver, and large magnificent jewels. With the Dissolution of the Monasteries in about 1539/1540 King Henry VIII dispatched some of his men including a goldsmith to Durham Cathedral to pry the jewels, gold, and silver off of Cuthbert’s coffin.  We can’t help but wonder if Cuthbert was not in some way greatly relieved that those extravagant and ostentatious jewels were now gone from his resting place.

Eadfrith who became Bishop of Lindisfarne in 698 likely produced the magnificent Lindisfarne Gospels that was handwritten and gorgeously illuminated in honor of St. Cuthbert. Current scholarship indicates a date around 715 for the production of the Lindisfarne Gospels.

The original Lindisfarne Gospels are still breathtaking. They are housed in the British Library as one of their most treasured books.  The pages of this remarkable gospel book along with the St. Cuthbert Gospel can be viewed page by page on the British Library’s website.

St. Cuthbert’s Way, a beautiful 62 mile hike from Melrose Abbey in Southern Scotland to Lindisfarne is a popular walking path through the hilly terrain of the Scottish borders. Pilgrims from all over the world also flock to Durham Cathedral, Lindisfarne, and Melrose Abbey to soak in the presence of St. Cuthbert, this gentle wise Celtic Bishop who still touches our lives 1300 years later.

Cuthbert’s wooden angel-carved sarcophagus along with some of the incredibly well preserved relics from his tomb can be viewed in the Open Treasures area of Durham Cathedral.

Resources: Bibliographical information relevant to the life of St. Cuthbert is available on the author’s Celtic and Anglo-Saxon saints website at www.saintsbridge.org. http://wp.me/p1RMRS-44

Meditation Monday – Let Us Serve One Another In Love

International Day for the Elimination of Racial Discrimination