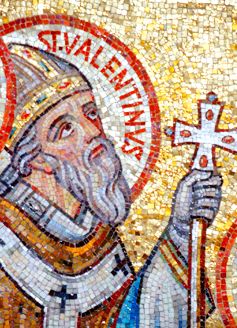 February sees the second largest card-sending date of the year (after Christmas) – Valentine’s day – with an estimated billion cards a year. It has never been a particular favourite of mine, perhaps because as a teenager I never received any cards!!

The theory is that you send a card to someone you admire or love, but without signing it. The one time I did get one, it drove me to distraction that I did not know who it was from, or even if it was a joke!!

The origins of the day (apart from as cynical money-making exercise by the card producers) are shrouded in mystery as far as the saint is concerned, with a plethora of legends. Indeed, there may be more than one saint involved!

However it is widely agreed that there was a 3rd century Valentine who was martyred for his faith in Jesus. The link with romantic love comes from two stories: one that he secretly married couples so husbands wouldn’t have to go to war, the other that while imprisoned he healed the jailer’s blind daughter and on the day of his execution left the girl a note signed, “Your Valentine.”

If you type “love” into the internet search engine, you get one thousand and twenty million possible links.  In 1967 the Beatles released the single “All you need is love”, which was deliberately composed because it was a message which could be understood by everyone. Love is the most basic of human needs and has given birth to much creativity whether in song, art or writing.

So if all we need is love – what kind? C.S. Lewis in his book “The Four Loves”, describes the 4 types of love which the Greeks had separate words for:

We may not experience all those kinds of love, and all are imperfect. The one kind which is guaranteed however – whether we get a card this year or any year, is the love of God.

Love defines God, it is the very essence of who He is, and must have drawn people to Jesus more than the fascination with His teaching or curiosity value at His reputation.

It is an individual love – we are called by name, recognized, individually loved, not just part of the world God loves in some vague collective sense, but picked out, personally known and cherished.  It is a self-giving love which took Jesus to the cross and kept Him there when the merest thought would have released the rescue hordes of heaven.

Through the brokenness of the cross there shines a dazzling beauty of grace….which can transform our sometimes fractured lives – His love “can take broken things and make them beautiful” (Ellie Holcomb)

That is a love, I believe, that is worth receiving this Valentine’s Day.

Searching in the Dark