What inspired you to write Embrace: God’s Radical Shalom for a Divided World?

Leroy Barber: I wrote this book because we are in some trying times, and I think we need to make a push toward deepening our relationships as a way to move us closer to seeing God’s kingdom break through in powerful ways during times of chaos like these.

We don’t know each other, and that is causing us to hurt each other. Our lack of relational context is allowing injustice to continue, political systems to break down and violence to run rampant around the world. The greatest power we have available to us—relationships—is not being used to change the world as much as it could. It’s my belief that relationships move the world forward in positive ways.

When we witness some great good, there are without a doubt friendships behind the scenes that made the difference. Large donations, peace processes between nations and even bipartisan advances in politics usually mean there is a good relationship in the background. If this is the case, then it is vital that we begin to relate to others in our lives. This will move the world forward in peace.

Describe some of the “Babylons” in people’s lives.

Barber: “Babylons” are anything different that you may identify as bad, less than or other. There are places and people in our lives that challenge us. The majority of us avoid these places because they are usually complicated and call for us to look beyond ourselves. The “Babylons” of our lives may be the very places we are called to love.

Barber: We are still very divided in the church and in life. Our country and world still allow us to stay close to our own “tribes,” and this often leads to hurt and misunderstandings as we encounter a diverse world. The hard places become things to avoid rather than something to embrace as a pursuit of peace. Our obsession with comfort bleeds over into our social lives and into our ability to speak truth in love, and we become isolated from people who are different. The “other” then becomes the outsider or enemy.

What would happen if more of us reached out to the “other” and went into those hard places you write about?

Barber: I hope to inspire people to explore this book together to not only love the people close to them better but to take a chance on loving someone they would rather avoid. I have found the deepest places of learning in the unexpected relationships with the “other” in my life. When I have embraced the people farthest from me, when I have loved beyond my circle, it has opened space for others and myself.

You say that Embrace is a personal call to “embrace the hard places God calls us to, both physically and relationally, as his strategy for pursuing reconciliation between vastly differing people.” How can we begin to do that?

Barber: If we go through the awkward process of learning about the “other” or entering the hard place, I think we gain the ability to solve problems better. I think we make peace an option because we begin to see the humanity in everyone, and, ultimately, we look like the God we serve. He created us all as an expression of his image. We look more like him when we are together.

This post is part of our October Living into the Shalom of God series and was sponsored by InterVarsity Press. 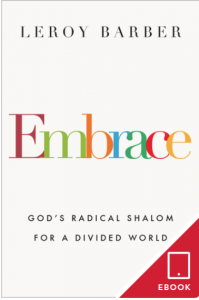 Leroy Barber has spent decades pursuing reconciliation and justice among groups of vastly diverse people. He knows the challenge of embracing those who are difficult to embrace, yet he advocates that the way to radical shalom on earth is through pursuing these relationships. We have the opportunity as the people of God to bring true peace and unity to a world that desperately needs it. Embrace the challenge to show a divided world the bridge-building power of God’s love.

A Prayer for the Victims of Hurricane Matthews.

I look forward to reading your book Leroy.