Expressive Strength in Creative Weakness – Feast of Hildegard of Bingen

O most noble Greenness, rooted in the sun,
shining forth in streaming splendor upon the wheel of Earth.
No earthly sense or being can comprehend you.
You are encircled by the very arms of Divine mysteries.
You are radiant like the red of dawn!
You glow like the incandescence of the sun!

I first met Hildegard of Bingen, a twelfth century nun, in the shape of words on a card I was sent when I had glandular fever as a young teenager.  Ten years later I found her books in the Bodleian library when I was researching female spirituality and Wisdom. Ten years after that her work formed the basis for my PhD on Convent Drama and the role of the Bride of Christ.  Thirteen years after finishing that PhD I find she is still with me, a difficult figure to relate to in so many ways, but a visionary inspiration none the less, and a woman who asks me to be a seer and inspirer in my turn.

Hildegard of Bingen (c1098-1179) was no ordinary Benedictine nun, and she has rightly now been recognised as one of the Mothers of the Church.  She was an Abbess, founding two convents; a prophet, speaking aloud several books of visions to be scribed by her secretary; she was a composer and dramaturg; she was a herbalist, healer and scientist; she was a preacher – to Kings, Popes and Bishops, and to anyone else who thought she should not speak her mind; and was also a copious dictator of letters to recipients throughout her native Rhineland and beyond.  She was a Renaissance woman centuries before the Renaissance.  And with all these skills, talents and impassioned interests comes a woman who I suspect was as divisive, difficult and stubborn as she was passionate and inspirational.  A marmite woman I suspect.

But Hildegard is one of my heroes.  She did all that she is now remembered for, and so much more that went unrecorded, whilst suffering from a debilitating illness, which experts now posit was probably some kind of migraine sickness.  She regularly had to retreat to bed, dictating her works, letters and orders to her secretary in darkened rooms.  This was a hugely charismatic woman who had an intricate personal knowledge of her own vulnerability.  And sickness did not stop her being the leader, artist and healer God called her to be.  In the face of huge periods of objection and rejection from the local Catholic male communities, she did not back down, stressing the importance for women to have an equal space within which to worship, and to worship in the way they themselves directed.  Even when she had no guarantees she could rely on her own physical strength she undertook preaching tours amidst a fractious political and religious climate.  Even when her Bishop received snide letters complaining about the music she and her nuns made, she did not stop composing the soaring polyphonies for which she is now so credited – polyphonies created in the age of plain chant – so that those who heard them and sung them might be taught about what she called ‘the inward things’.

And throughout it all, in all her works, she pointed her readers and listeners back to the power of her Creator, on Whose strength she relied, in Whom she lived and found her being.

It seems to me that it takes a very particular type of strong personality to be able to continue to live a creative, fruitful, flourishing life in the service of God and others; and that such a life-force is only found in those whose strength is based on a recognition of their absolute vulnerability and powerlessness.  For Hildegard this life-force came from what she idiosyncratically identified as ‘viriditas’, a ‘greening’ of the spirit that forms the innate connection between God’s goodness in the heart and God’s goodness in the earth; a connection Hildegard personifies as Grace.  ‘Greening’ is the epitome of God’s blessing to those God loves.  She who was intimately acquainted with the brittle, desert times of pain, kept writing about the necessity of greening her own, and everyone else’s, spirit by contact with and obedience to her Beloved, the Creator, the All-Powerful God.  She was determined to love her God and express that love in all the ways she knew how, despite the creative difficulties; indeed, through the difficulties.  As I struggle to find ways in which I might join every day with the Creator in creating and healing, Hildegard’s expressive, exuberant celebration of the ways in which we may all still be greened continues to echo down the centuries to encourage me this day.

Holy Spirit, bestowing life unto life,
moving in All.
You are the root of all creatures,
washing away all impurity,
scouring guilt,
and anointing wounds.
Thus you are luminous and praiseworthy, Life,
awakening, and re-awakening all that is. 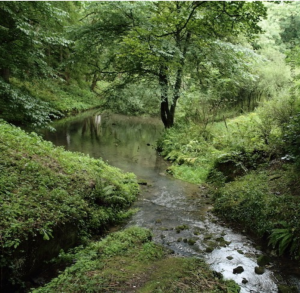 What Does Prayer Have To Do With Alleviating Poverty?

FreerangeFriday: Pray With Your Cup

FreerangeFriday: Getting Ready for a Sacred Summer

FreerangeFriday: The Cup of Receiving

FreerangeFriday: Drinking in Peace and Forgiveness

FreerangeFriday: The Easter Cup of Doubt

Kate, beautiful as ever. Thank you for these thoughts on this great feast of remembrance of this extraordinary woman. I salute you, Christine and all the women and men who have championed her and brought her gifts afresh to the world in these times,’…may we all still be greened’

Amen to that Judith! Thank you for all your encouragement. All blessings

An incredibly inspiring article thank you Kate. She obviously drew her strength, courage and affirmation of what she was doing from a deep connection to an eternal source.

Thank you so much for your encouragement as ever Ana Lisa. I’m so glad you were inspired – Hildegard is an inspirational woman most definitely! All blessings to you.