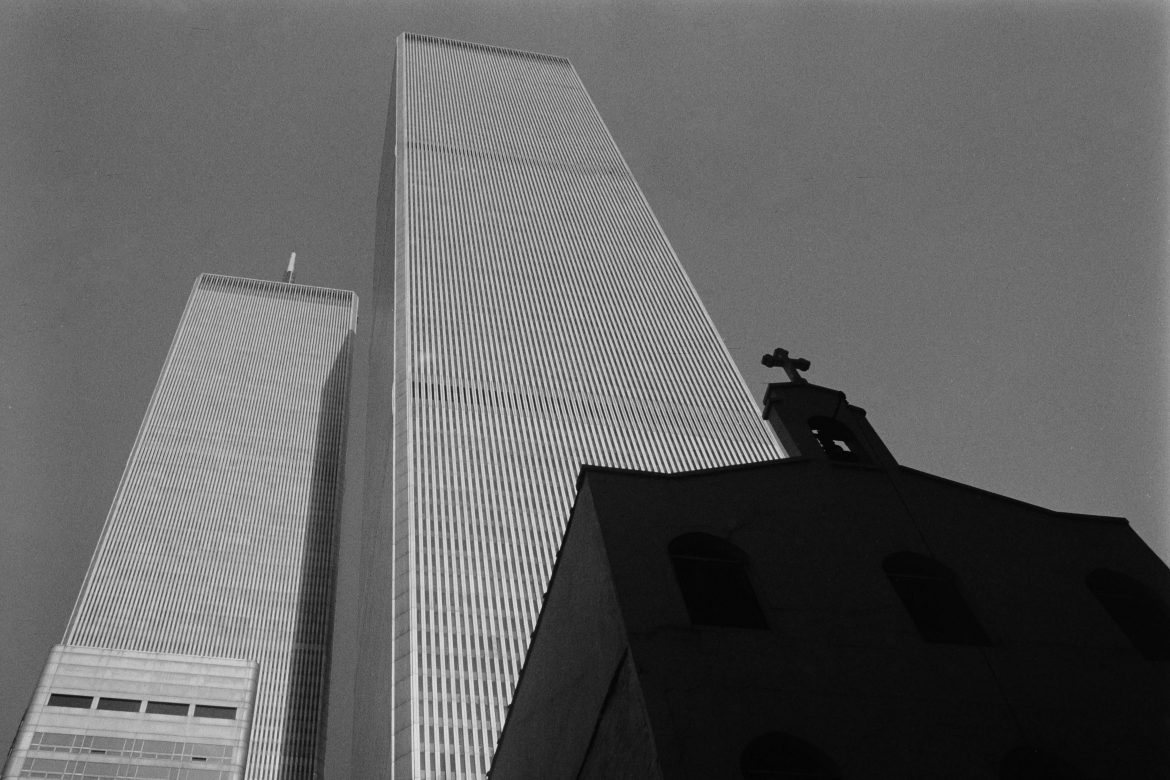 In April of 1977 (my junior year in High School), I had the opportunity to travel to Washington, DC and New York City as a part of a YMCA “Know Your Government Seminar” in my hometown. This faded picture was taken as we took the Ferry to the Statue of Liberty where we were able to climb up to the top of Lady Liberty. While in the Big Apple, we attended an off-Broadway play (Your Arms Are Too Short to Box with God), visited Times Square, and saw a multitude of other sites. We had a choice to either go to the top of the Empire State Building or the World Trade Center. I chose to go to the top of the iconic Empire State Building.

Fast forward again to Nellis Air Force Base in Las Vegas, Nevada. I was the Chaplain instructor at the Air Combat Command Desert Warfare Training Center at Indian Springs Auxiliary Air Field an hour north of Nellis. We were in between courses and I was driving to the gym for morning physical training. I was listening to National Public Radio when a puzzling piece came on. The announcer said that an airplane had struck the World Trade Center. Immediately after that, my cell phone rang and it was my commander on the other end of the line. Our entire unit was being recalled and the Threat Condition had been elevated to Delta which meant the base was under imminent threat of attack. This wasn’t an exercise and when I asked the commander if this had anything to do with a plane crashing into the World Trade Center, he said “what in the hell are you talking about?”

For me, as a US Air Force Chaplain, that day changed the rest of my life and my career. When I first went on Active duty with the Air Force, Iraq had just invaded Kuwait and forces were building up for Operation Desert Storm. This was something completely different. Going back home, I put on my uniform, grabbed my gear, and kissed my wife good-bye. Life had changed and we were at war with an enemy we didn’t really understand or know at that point. In 2005, I would find myself in Afghanistan and Uzbekistan supporting Operation Enduring Freedom. When I retired in 2011, we were still at war and hunting for Bin Laden. Life had indeed changed for anyone in uniform and it would never be the same again.

When I think about the missed opportunity to go to the top of the World Trade Center, I don’t think about my own loss but rather about the lives of all those who died that day in New York City, Washington, DC, and Shanksville, PA. I also think about the survivors of those horrific attacks (including many colleagues I had served with who survived the Pentagon attack). I also think about the thousands who have died in the years since the vicious attacks on that September day in 2001 which changed the world. In the years since the attacks, I either participated in or conducted nine remembrance services all around the world. Each time I prepare to fly somewhere and go through security, I remember. Each time I reflect on the horrors perpetrated in the name of vengeance or hatred or bigotry or fear, I remember.

Today, there is so much hatred, bigotry, xenophobia, and fear which runs rampant all around this world. While I may be disappointed that I didn’t get to the top of the Twin Towers back in 1977, what disappoints me more is that this world and my country has moved towards darkness and fear instead of hope and light and peace. As I lead worship at Presbyterian Community Church of the Rockies in Estes Park, Colorado where I am the pastor, I will pause to remember… to pray that I may be an instrument of God’s peace and reconciliation in a world gone mad.