I’ll bet you didn’t know there was a saint for hemorrhoids. I didn’t! But there’s much more to Saint Fiacre than hemorrhoids. He is also the patron saint of herbs and vegetable gardens and is honored today, September 1st. If you see a statue in a garden and he’s holding a shovel in one hand and a book (the Bible) in the other, that’s not St. Francis; it’s Fiacre. 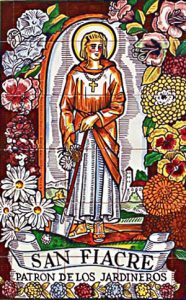 A seventh century Irish monk, Fiacre was so skilled at growing vegetables and herbs and knowing how to use them to help heal various ailments, he was inundated with visitors seeking help. In search of more solitude, he left his homeland he ended up in France where, legend has it, was told by St. Faro, Bishop of Meaux, that he could have as much land as he could dig a trench around in one day. Dragging his staff behind him, trees and bushes were miraculously uprooted, leaving in their wake a trench.i

Although he sought out solitude, Fiacre was far from a hermit. He built a monastery where he found retreat for himself and other monks, and he treated the ills of all who came to him. All that gardening was apparently hard on Fiacre. The story has it that his specialty of treating hemorrhoids came after he himself got them from all his hard work in the garden. Then, one day, while sitting on a stone, he was supernaturally healed. It is said you can still see the imprint of his hemorrhoids on the stone where many still travel to be healed of “Fiacre’s Curse”.ii

Hemorrhoids were not his only claim to fame (although for a while they were called the “figs of Saint Fiacre”). Fiacre also was sought out to cure worms, venereal disease, kidney stones, and other issues affecting the skin and digestive tract.iii

But all of this fame flows from his gardening skills. It is written that vegetables and herbs from his garden were of the highest quality. Fiacre’s talent in the garden was matched by his knowledge of herbs and his desire to bring healing to the people around him. I like that. And although I’m not so interested in being known as the healer of hemorrhoids, I wouldn’t mind learning more about the various herbs I grow and how they can be used as a balm of healing or the spice of reconciliation in my neighborhood.

Fiacre’s life also got me thinking about historically recognized saints in general. They were sought out, with people often traveling a great distance to see them (or their relics). Though not Saints with a capital S, we are all saints in the family of God. So what in our lives is attractive to others? Is there something compelling about how we live, some value we add to the lives of others? It’s not that we all need to have some kind of monumental impact, but shouldn’t there be something saint-like about our lives?

As I reflect on St. Fiacre’s life I can’t help but reflect back on my own. He cultivated gardens and attracted thousands. What in my life could I cultivate, attracting people to the message of wholeness, peace, and healing found in Jesus? Perhaps it’s something as simple as gardening… or as mundane as hemorrhoids.

On Leaving A Gap for Discernment

Fascinating. I have so much to learn from the saints of old. My first question is, how do you pronounce his name?

Thanks, Mark. I had a little fun with this saint. Let’s just say I don’t plan to grow figs any time soon! Pronunciation? The French, as it’s written in here, would be fee-a-cruh pronounced by English speekers and fee-ach by the French. In Irish Gaelic FEE-uh-Kra or FEE-uck-ra as it was spelled a bit differently. But I still stumble ove r the name as I’m fluent in neither Gaelic, French, or English!