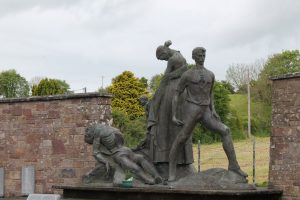 In stark contrast to the beauty around us that is County Kerry in the Irish Republic, stands a memorial to those who died during the battle for independence. I was overwhelmed by the power of this monument in Ballyseedy when we toured Ireland on our honeymoon in 2014. This particular memorial commemorates the Civil War’s worst atrocity according to the Irish Times. Eight anti-unionist treaty prisoners were tied together and blown up by a landmine set off by loyalist (to the British Crown and the Treaty that United Ireland to England).

One man survived the blast, his name was Stephen Fuller. Stephen, the lone survivor of this atrocious crime, passed an invaluable lesson on to his son, Paudie. Paudie related this story as he reflected upon his father’s life and the miracle of his survival. “He held no bitterness against those who tried to blow him up; in fact, he was full of forgiveness,’’ he said. “My father once said to me that the Civil War divisions should not be passed on to the next generation.’’

Why do I share this story from the Irish Civil War of 1922-1923? And what does it have to do with Saint Aidan of Lindisfarne? In Ecclesiastes 1:9 we read the following: “What has been is what will be, and what has been done is what will be done; there is nothing new under the sun.” Sadly, in Aidan’s time warfare and horrific cruelty were just as much a part of the landscape as it was during the Irish Civil War. Aidan was born in Ireland in approximately 590. As a young lad, he traveled to Iona to study in the great monastic house at Iona that another Irishman, Saint Columba, had founded in 567. As missionaries, they faced warfare and trouble in their own times as they sought to bring the Gospel to the Picts in what would become Scotland (Columba’s mission) and the Anglo-Saxons in the Kingdom of Northumbria in Northeastern England (Aidan’s mission).

While living on Iona, Aidan heard tales from another brother who had been called to serve as a missionary to Northumbria. Corman’s mission had not been successful and he returned to Iona a bitter and angry man. David Adam, in his book “Flame in My Heart” summarized Corman’s thoughts in the following harsh judgment: “He seemed to suggest that these people were not worth the bother, that God could not be interested in them!” (p. 24)

During the awkward silence with Corman and the rest of the community, Aidan prayed… “O Lord, give me springs and I will water this land. I will go, Lord. I will hold this people in my heart.” (Celtic Daily Prayer, p. 158) From that prayer, Aidan spoke these words out loud to Corman and the assembly: “Perhaps, my brother, if you had spoken with more gentleness, and of the love of Christ, giving them the gospel to nourish them like milk is given to a tiny baby, then you would have won them and remained among them.” (Celtic Daily Prayer, p. 158)

Aidan was consecrated a bishop and sent to Northumbria where he founded the monastery at Lindisfarne and began the work of bringing the nourishment of the gospel to the people Corman said weren’t worth the bother. The Lord called and Aidan responded. He left all that was familiar and comfortable because God had called him. He responded in much the same fashion as Isaiah did: Then I heard the voice of the Lord saying, “Whom shall I send, and who will go for us?” And I said, “Here am I; send me!” (Isaiah 6:8)

Aidan responded to God’s call and he indeed did bring the gospel to a people whom others had discarded as not worth the bother! The monastery at Lindisfarne which he established became a seat of missionary activity much like Iona to the west. How did that happen? A quiet monk responded to God’s call with a courage that came from somewhere outside of himself.

Today there are so many marginalized and discarded people who surround us. They are the invisible ones whom society ignores. The poor and the homeless… the mentally ill… prisoners… they have been ignored and so many say that they aren’t worth the bother. Today we are surrounded by hatred, bigotry, racism, misogyny, homophobia, ignorance, and fear. If you aren’t exactly like me in belief, skin color, ethnic background, or religious belief; well then, you are less than human. You aren’t worth the bother.

I thank God that there are people today who, like Aidan of Lindisfarne, are willing to respond to God’s call to love and to bring the gospel to nourish others rather than to beat them over the head. It takes courage and a humble spirit to do that. Are you willing to do that? Are you willing to see Christ in the face of those whom others say aren’t worth the bother?

Listening to, and Learning from, the Life of Jesus: the woman taken in adultery