Reconciled to Self, and Then Some 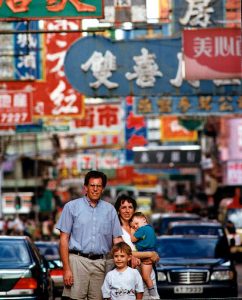 Our family circa 1997 in Kowloon City, Hong Kong – our neighborhood for eleven years.

Twenty years ago my wife, Susan, our four-year-old son, our one-year-old son, and I were preparing to head to Hong Kong with Mennonite Mission Netork for our first four-year term. We were just finishing up at Evergreen Mennonite Church in Bellevue, WA, a church we had helped start five years earlier, where I was the “founding pastor”.

Things Are Not Always As They Appear

By this time my emotional life had been in recovery for just over six years and we were ready to go. That wasn’t the case in 1985 when I was experiencing full-on panic attacks. As clearly as if it were yesterday I still remember my first attack. I woke from a deep sleep with tingling in my right arm. No big deal, I’d probably fallen asleep on it and pinched a nerve. But soon the right side of my face started tingling, then my whole right side! “What’s going on?” came my panicked response.

Hoping to alleviate my anxiety, I got up and stumbled to the couch. Nothing on TV, I’ll just read a bit. Picking up “The Door” (formerly “The Wittenburg Door”, a satirical Christian magazine) I opened it and began reading the first article I turned to… “The Lighter Side of Being Paralyzed for Life”! I kid you not, that was the title of the article!

I won’t go into all the details of my next few years of spontaneous panic attacks; suffice it to say that I had just about every test possible and the doctors consistently came back with the reply, “There’s nothing wrong with you.” Of course, from my perspective, they’d either missed something major or I was going crazy. 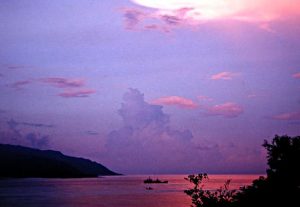 The view from our flat in Hualien, Taiwan.

By 1988 I was doing pretty well and my wife and I headed off to Taiwan for a two year voluntary ministry stint. For awhile all was well. Then, like a dark shadow oozing across my soul, the panic returned. At one point I was convinced I was going crazy and began fearing what I might do. Suicide crossed my mind several times but, fortunately, I was too afraid of dying to make any real plans.

Returning to the US in 1990, Susan and I attended our mission agency’s re-entry retreat. I shared my story with a good friend there who prayed for me. Miraculously I have not had a full on panic attack since that day! Disappointingly, at least at the time, I continued to suffer from “Generalized Anxiety Disorder” (GAD). Why in the world would God choose to only partially heal me? What’s up with that? I began getting help from a psychiatrist and from medication. Life began to return to “normal”.

And here’s where I return to our adventure to Hong Kong. Our mission agency was well aware of my past; I had been quite open with them about it all. But I was also cautioned several times, “Don’t talk about your anxiety disorder in Hong Kong.” You see, at the time the general public in Hong Kong had attitudes about mental illness similar to Americans’ in the sixties. You don’t talk about these things. Not only are they private, they’re scary and no good leader should be struggling with them. Obviously (and thankfully) our mission agency knew better and sent us to Hong Kong.

Dutifully I complied with the request not to share about these struggles. I didn’t share my past crises and I didn’t share my current affliction with GAD. But it wasn’t long before I began to talk with Chinese friends who were suffering in silence. They themselves or a family member were wrestling with mental illness and feeling abandoned and alone in their suffering. How could I, in good conscience, not share my own journey?

Slowly I began to open up, first with one or two, then in a sermon in front of the whole congregation. After that sermon, several people came up to me to share their own stories. It was liberating – both for them and for me!

What does all of this have to do with “Learning from the Life of Jesus”? It’s a long story, one I won’t tell in detail here, but I had grown from insecurity to over-confidence in my early-to-late twenties. Being a good Christian, I had outlined several possible career moves – all great things I planned to do for God. The problem was that God has asked none of it from me.

Jesus taught another way. He called his disciples out of their chosen career paths and into the unknown. Can you even imagine what it must have been like for Peter and Andrew, immediately leaving their nets to follow Jesus? How about for James and John who not only left their nets, but also their father, to follow Jesus? We want to be in control. But Jesus bids us, “Come and follow”.

While in Taiwan, in the midst of my deep struggles, I’d had a very clear call to leave behind my past and follow Jesus into a new kind of ministry. I knew when we returned to the US I was to enter seminary to be “equipped”, but for what I had no idea. “Trust” was the word that returned over and over. Looking back it seems ridiculous that God, in the midst of my struggles with panic and anxiety, would push me on to a new path. And yet as I read the Gospels I see that over and over again this is how he moves people away from that which cripples them into a life of healing and fullness.

I don’t believe for a moment that God afflicted me with panic disorder. That is not the kind of God I know. But I do believe I now understand why I was only partially healed. Perhaps like Paul’s “thorn in the flesh”, God allowed brokenness to remain, a brokenness that reminds me that I am not self-sufficient. Just like the rest of the world, I need God, I need daily bread. I am not learning from the life of Jesus when I think I’ve got it all figured out.

All my past scheming for God, my “can-do” attitude, and my natural problem-solving abilities had become obstacles in the pathway down which Jesus was beckoning me. Slowly I began to see that loving God with my “whole heart, soul, strength, and mind” could only happen if I quit tripping over my own feet and began reconciling to the person I was… am.

Thirty years have passed since that first panic attack. Although I’ve tried (under doctor’s supervision) to go off medication for the general anxiety, I’ve discovered I still need it. Similarly I believe I still need my affliction to remain engaged with God’s leading, a constant reminder that I’m not in control. I’ve reconciled to this fact. I’ve reconciled to my own brokenness in this area. And I’ve discovered that this weakness truly is a strength in the creative hands of my Creator.

…And Love Your Neighbor As Yourself

What I’ve also learned over the years is that by reconciling with and embracing my whole being, I can both love God more deeply and enter more fully into the suffering and brokenness of others. It seems obvious now, but at the time I really had no idea that by denying my own struggles, my own brokenness, I was actually limiting my ability to love others. In fact, I would go even further to say that my denial became a stumbling block to others precisely because I perpetuated the myth that leaders are not broken (although I’m confident that many around me knew I really was).

Often it’s easy to focus our attention on the fractures around us. Diving in, we get caught up in our neighborhoods, our church activities, and missional mindedness. As important as these things are, what if they become a distraction from facing the fractures within? Or worse, what if those internal fissures end up becoming sink holes that trap the very ones we’re trying to connect with?

Jesus has some pretty harsh words for those who put “stumbling blocks” in the way of others (Mt. 18:6-7). As I listen to the life of Jesus, to the people he loved, to the grace he gave, to the hypocrisy he called out among the religious elite, I have to wonder how often these “stumbling blocks” appear because we are not reconciled to our own broken places and end up harming ourselves and our neighbors.

As I’ve explored this area of reconciliation in my own life, one thing has become quite clear: the efforts I put into bringing reconciliation to the world around me are profoundly influenced by the level of self-reflection and reconciliation to the person I am. Jesus gives me permission to love myself as I am. Sure, there are parts he wants to change, to heal, but the only way to follow Jesus is to begin right where I am.

Learning from the life of Jesus is a life-long process. We see this in the lives of the disciples as they began that journey and walked with Jesus in those early years. And we see their flaws and brokenness as they grapple with Jesus’ death, resurrection, and what it means for them, and the world, after he ascends into the clouds. Perhaps this is what I appreciate most about the story of God in the New Testament: our personal growth and our ability to lead and influence others is only limited by our brokenness to the extent that we refuse to embrace a love that has overcome all things.

Listening to Jesus As He Listens to the Father

Does Church Have a GEN NEXT Future?