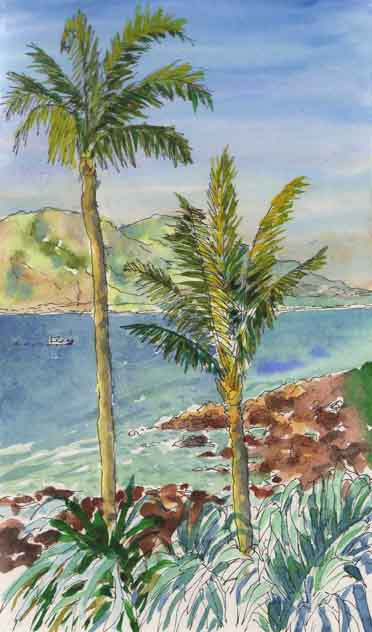 The Gospel of Mark records a busy first week of ministry for Jesus (Mark 1:14-34). Jesus announces the “good news of God” and calls disciples. He heals a man with an unclean spirit and many other people, including Simon’s mother-in-law. He casts out demons. He teaches in the synagogue on the Sabbath.

The next morning, “while it was still very dark, he got up and went out to a deserted place, and there he prayed” (Mark 1:35).

Simon and the other brand new disciples hunt for him. When they find him they tell him that everyone is looking for him, presumably to ask for more healing. Instead of jumping up and going back with the disciples to the village where they were the day before, Jesus replies, “Let us go on to the neighboring towns, so that I may proclaim the message there also; for that is what I came out to do” (Mark 1:38).

Jesus’ time of prayer in the dark morning gave him a renewed sense of his purpose. He was able to say “no” to other people’s agendas because he knew what he “came out to do.” I long to have that kind of clarity about my purpose, so I wish the Gospel writer had recorded more details. I have so many questions about this incident.

I wonder what Jesus was thinking and feeling when he talked about going on to the neighboring towns to proclaim the message. Was he frustrated that so many people came to him to be healed the day before rather than wanting to hear more about the good news of God? Did he want to go on to the other towns so he could get back to his ministry of preaching? Or did he view his healing ministry as a part of proclaiming the good news? Did he simply want to scatter the seed widely, both by preaching and healing, so it was important to move on to new villages? I admit that the answers to these questions wouldn’t have a huge impact on my own life and ministry, but I’m curious.

I have other questions that are more relevant to my desire to hear God’s guidance clearly. I wonder about what happened in the very early morning in that deserted place. Did Jesus hear the voice of his Father giving new instructions? Maybe he heard, “You did a lot of healing yesterday in only one town. You need to go to other towns and focus on proclamation rather than healing.”

Perhaps being alone, away from the clamoring crowds, helped Jesus recover his original sense of call. He says, “This is why I came out,” and perhaps some time alone enabled him to evaluate the previous week in the light of his resolve. Maybe solitude and prayer renewed his clarity about his goals.

I wonder if maybe the time alone with his Father in prayer was simply pure joy. Maybe he knew his calling clearly and felt that the days before had been significant and purposeful. Maybe he just wanted a few peaceful moments to enjoy intimacy with his Father.

I also wonder if being in a deserted place, enjoying the beautiful world he helped create, gave him a sense of restored purpose. It was full dark when he got there, but perhaps the birds’ raucous dawn chorus began while he was praying. Perhaps a sliver of light on the eastern horizon announced the arrival of the sun and revealed the trees and green hills of Galilee. Perhaps the beauty of what he could see and hear reminded him that he came to earth to restore the whole created order to its original design.

I don’t want to say that time alone at dawn in prayer is the only way to gain or regain a clear sense of the goals and purpose God has for us. But I do think Jesus provides a model that combines several components: intimacy and joy in God’s presence, listening to God’s guidance, and enjoying the beauty of the earth that came from the mind and Word of God, and which now needs to be restored back to its intended purpose. I want to listen to the pattern of Jesus’ life and learn how to draw near to God more often and more fully.

The Lord and His Prayer: a reflective review

On Listening and Telling

This early time, before the rest of the world is up, is very precious for listening to that still, small voice. It is a good time to soak in scripture and the words of other giants of faith – because God often speaks through them appropriately for our day. I find it very valuable to write as I pray. Having done this for a number of years, it is very salutary to re-read previous prayer journals and to note how many prayers, that I had forgotten, God has answered.
It was easy to do this in Zimbabwe, where I could sit outside almost every day on the verandah. Not nearly so easy in England where the climate is not so clement. There is something about the freshness of dawn that can’t be experienced indoors. I think the solitude is also important for uninterrupted time with God. You can’t focus the same way when there is the possibility of being disturbed by someone else.