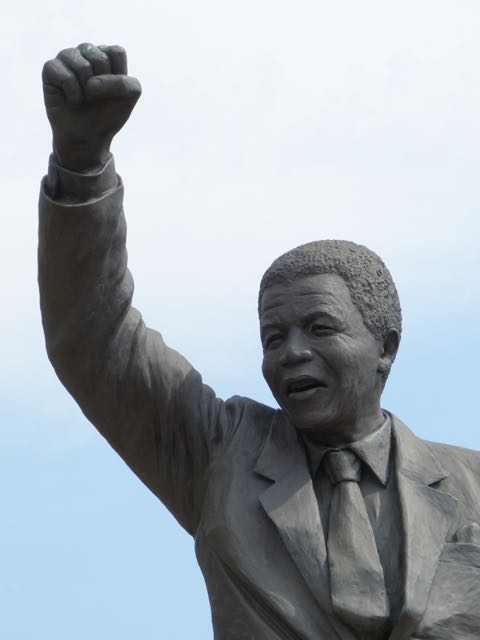 43 “You have heard that it was said, ‘You shall love your neighbor and hate your enemy.’ 44 But I say to you, love your enemies and pray for those who persecute you, 45 so that you may be sons of your Father who is in heaven. For he makes his sun rise on the evil and on the good, and sends rain on the just and on the unjust. 46 For if you love those who love you, what reward do you have? Do not even the tax collectors do the same? 47 And if you greet only your brothers, what more are you doing than others? Do not even the Gentiles do the same? 48 You therefore must be perfect, as your heavenly Father is perfect”.

Half of my family is Welsh, as I am, hailing from Llanelli but the other half is from South Africa, Bloemfontein, so we were or should have been, a multi-cultural family with the kind of diversity that would fit in to cosmopolitan London. But no such luck, this was the 1970’s.

I grew up in a time and place where racism was rife and really part of the norm. Gangs of skinheads roamed the area and would frequently attack groups of blacks and Asians, their community centres and stores, violence was rife and if you were not part of it then you were the outsider. My family were racists, my dad was apartheid South African and my brother was a member of the Nazi party in London and I was regularly thrashed for having black and Asian friends at school.

This is how I grew up, silently against racism, but society making me feel actually complicit in their prejudices. But a teacher when I was at secondary school helped me to realize myself a bit more. He taught me about Steve Biko, Robert Sobukwe and others including Nelson Mandela.

I was impassioned to hear about these brave men, freedom fighters to a cause that seemed to me impossible to ever succeed in, but of course I learned that for them not to succeed meant banning, imprisonment and in the case of Steve Biko, death. I wept at man’s inhumanity to man based on colour, nationality or religion, I was truly radicalized by these men and their struggles.

I formed a Free South Africa movement in school, we wrote letters to Mandela, I doubt any ever got through, we held protests on school grounds leading to detention, suspension and threats of expulsion, attacked by racist school mates and ribbed by racist teachers. But I learned it is important to stand for what is right and to never let injustice walk the streets and parade itself.

Nelson Mandela spent 27 years in prison having been imprisoned in 1962 for leading a sabotage campaign against the intrinsically racist South African apartheid regime. But in that time he didn’t back down from his beliefs or his passion for justice, nor his resolve to end apartheid. Eventually the west began to take more notice and as the years wore on more and more movements were created, pressurizing the South African government to release Mandela and end apartheid. In 1990 Mandela was released after international pressure and growing fears of a real racial war.

Mandela negotiated with the president, F.W. de Klerk which led to massive reforms and the end of apartheid, the first multi-racial elections and the premiership of Mandela.

Whilst before imprisonment Nelson Mandela was a radical revolutionary, originally committed to peaceful struggle, he eventually adopted more violent direct action. But it was his later humility and peaceful actions that garnered him such love and respect. Simple acts of reconciliation like presenting the Rugby world cup to Springbok captain Francois Pienaar.

He showed that acts of love, kindness, togetherness, inclusion and most of all forgiveness were able to change the face of the world. Those acts defeated and revolutionized one of the most brutal regimes on the planet at that time and moved from hating his enemy to loving them.

South Africa still had its troubles, the far right still hated Mandela and the left thought he was too forgiving and inclusive, but he showed a middle way that was the right route, a straight road ahead.

Nelson Mandela died on December 5th 2013 from a respiratory infection and his funeral was attended by dignitaries and world leaders from around the globe as well as being televised worldwide, such was the global communities love and respect for the man. South Africa remains a pretty volatile place with racism from both colours still a problem but hopefully one-day can find a lasting peace.

As for me, Mandela helped shape me. But for him and other fighters against injustice I may have ended up a racist like many members of my family, thankfully I never did. Thank you Mr. Mandela.

Every Heart Beats in Every Chest – Nelson Mandela Day