Every Heart Beats in Every Chest – Nelson Mandela Day 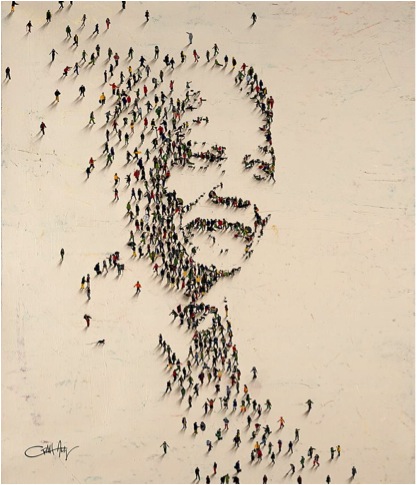 A boy runs under a sun made
for shining on every soul.
But Africa pulses under his feet
with rumbles of injustice.

He felt the tremor on the
day he awoke to discover
there was a colour code of race and culture
under South African skies.

“No one is born hating another person
because of the colour of his skin,
or his background,
or his religion.
People must learn to hate,
and if they can learn to hate,
they can be taught to love,
for love comes more naturally
to the human heart
than its opposite.”

Justice grew a fierce song
that could not rest in him –
to cry out over every mountain
and into the deepest valleys
of his nation, over stones
and rivers and across the ocean.

“For to be free is not merely
to cast off one’s chains,
but to live in a way
that respects and enhances
the freedom of others.”

A bird is made for freedom –
To fly is what comes naturally.
A human is made with blood –
That courses red through every vein.

A bird in a cage may be battered,
but 27 years in a cage will not
remove the knowledge of flight
that resides in every cell of his body.

Open the cage and he will show
every human being what it is
to be made equal, to have a voice,
to live with a heart beating in his chest
as every heart beats in every chest
across the nations of the world.

“As I walked out the door toward the gate
that would lead to my freedom,
I knew if I didn’t leave
my bitterness and hatred behind,
I’d still be in prison.”

“When I walked out of prison,
that was my mission,
to liberate the oppressed
and the oppressor both.”

“I always knew that deep down
in every human heart,
there was mercy and generosity.
Man’s goodness is a flame
that can be hidden
but never extinguished.”

In 1994 for the first time
human beings of every colour
made their mark of personal choice.
Mandela was elected president.

In 1990, Nelson Mandela was released from 27 years in prison and worked together with F.W. de Klerk to end apartheid.  Three years later they were jointly awarded the Nobel Peace Prize.  By 1994, for the first time in South Africa, democratic elections took place and Nelson Mandela was elected president by the overwhelming majority.

Nelson Mandela (18 July 1918 – 5 December 2013) pointed to a supernatural reconciliation that is only possible through mercy and forgiveness.  This is the greater way we have been shown by Jesus on the cross.

The blood sacrifice
on the hill of Golgotha
of the one and only
Son of the Living God,
has torn asunder for all time
the curtain of division.

As you listen to “Nelson” – A Tribute to Nelson Mandela by Greg Engle, may you be encouraged in the mercy of our Living God who is the God of impossible possibilities.