When I Met St Benedict 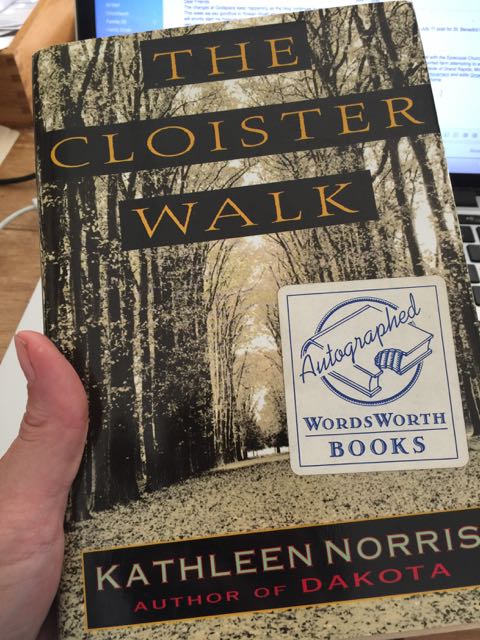 Twenty years ago I was a young woman in my early twenties. I was just beginning ministry. I knew enough to know that our world was broken by sin and violence. I also knew I wasn’t well enough equipped to resist the sin and violence in my own soul. And I was in a bookstore.

Those were the days before the Internet and before Amazon: before anyone could publish writing to the world on their own from their home, before bookstores mostly vanished from Michigan, where I live. In those days, when I needed more wisdom than I could find on my own, those days before Google and Facebook, when email was still a novelty and the Book of Common Prayer was not yet my own, I went to a bookstore.

On this day, on the shelf of a bookstore whose name I no longer recall, I found The Cloister Walk by Kathleen Norris. That book came home with me. Through it I met a man whose influence on my life and ministry has been second only to the influence of Jesus Christ. I met St. Benedict.

I am glad I met him that way. The other way to meet St. Benedict is by reading his rule itself, which has always been too dense and different from my own life for me to fully grasp, though I keep trying. Kathleen Norris’s book told the story of her time with the community of St. John’s Abbey, in Collegeville, Minnesota. Her reflections made St. Benedict approachable, even friendly. Norris described a community marked by worship, humility, and honesty. They were that way for a reason: the Rule they followed.

As soon as I met St. Benedict through reading about Kathleen’s experiences as a Benedictine oblate (a lay affiliate of a monastery), I wanted this experience myself. At the first opportunity, I made a retreat at a Benedictine house, where the world Kathleen described came to life. My first Benedictine retreat was at Mount Saviour, a Roman Catholic monastery in New York State. I was probably the only twenty-six year old single female Unitarian Universalist pastor that visited them that year. But they couldn’t have been more welcoming.

St. Benedict laid a foundation for communities to institutionalize kindness. “All guests are to be received as Christ,” the rule states. He also created a rhythm of life that still is kept by communities around the world: each day contains prayer, work, study, and rest.

H e serves an antidote for the restlessness of our world: his vow of stability, a commitment to a certain place and people for a lifetime, gives incentive to work things through together for the common good, rather than leave when the going gets rough.

As the daughter of a refugee, I know that geographic stability can be an impossible, longed-for luxury. And yet, as someone whose ministry has taken place for the last fifteen years in one place (albeit in two denominations), it is Benedict’s commitment to stability that has come to mean the most to me. Sin and violence have not lost their grip on the world. But as I practice faith in my particular place, I come to understand more and more clearly what is wrong in the particular slice of the world I live in. I also discover more and more about how God is at work in my place. Fifteen years in, I have relationships that would have been impossible fifteen years ago. Some of those relationships have shown me more about the sin and violence in my own soul. Many have helped me overcome it.

In Benedict’s commitment to creating a school for God’s service through stability, conversion of life, and obedience, I found a path for discipleship that guides me still. It is not for everyone. But it is for me.

The Cloister Walk is still in print, twenty years later. In its day, it was a New York Times bestseller. More people than I are looking for a way to serve God in this world. Listening to St. Benedict – and listening to the many people who have followed his Rule through the generations – will help us find one.

The Rev. Nurya Love Parish is a priest with the Episcopal Church and ministry developer for Plainsong Farm, a community supported farm attempting to explore agriculturally supported discipleship outside of Grand Rapids, Michigan. She curates the Guide to the Christian food movement and edits Grow Christians, a group blog for families practicing faith at home.

Celtic saints help us learn to listen to the Creation

Meditation Monday – Listen to the Book of Creation

Leading Spiritually From Within…. the Art of Discernment

What Does Your Soul Long For…. Musings of...

Whole and Reconciled – An Interview with AL...

What a way to live! My shoulders are no longer wrapped around my ears! Thank you.

Well. the challenge is actually living it day to day – I definitely don’t have that part figured out! But I am so grateful to have something to which I can aspire.

“It is not for everyone. But it is for me”. I am an oblate associated with Mount Saviour Monastery and I take care of the guesthouse for women. I was not here 20 years ago but the description of how welcoming it was still applies. Our visitors come from quite a variety of backgrounds and we are happy to have each one as a guest.

I am so touched that you read this and commented! The guesthouse for women was where I stayed and felt so cared for. Thank you so much for the good work you continue.

Oh Nurya, Thank you so much for this. I found it on our Abbey of the Arts website – what a glorious response to the question about different kinds of Oblate experiences. I hope we get a lot more like this. But this one, really fed my soul. Beautifully written and full of the honesty of your experience. You are so blessed to be be on the path you are. You reminded me actually that I had taken myself off to retreat at a Benedictine Monastery for a week in three Januarys in the earl 2000’s… my home was over full with the blessing of a married daughter living with us for 13 years while her three daughters were born and they paid off their student loans and got their economic feet under them. I miss those days in many ways not but back then I needed a bit of silence each January and the Benedictines provided it in a perfect way for me. I had not thought about those weeks for a long long time. May God continue to bless you and make you a blessing to other.

Thank you so much for these kind words and the opportunity to share the remembrance of Christian hospitality in the Benedictine tradition across the miles and years.