Celtic saints help us learn to listen to the Creation

Psalm 19 tells us that the heavens speak to us:

The heavens are telling the glory of God;
and the firmament[a] proclaims his handiwork.
Day to day pours forth speech,
and night to night declares knowledge.
There is no speech, nor are there words;
their voice is not heard;
yet their voice[b] goes out through all the earth,
and their words to the end of the world.(verses 1-4, NRSV)

What are the heavens saying to us? Are we listening? 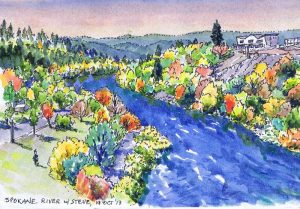 Maybe this omission comes from our fear that we will be viewed as pantheists if we talk about God’s hand in creation. Maybe the pervasive emphasis of New Age thinking has made us fearful that we will lose a Biblical perspective if we think too highly of creation.

The New Testament doesn’t talk about God the Creator as much as the Psalms do, and maybe we are concerned that we need to faithfully reflect the priorities of the New Testament. Maybe we like viewing ourselves as autonomous human beings who don’t need to depend on God for every breath and every meal. I don’t know for sure what has caused the focus on God the Redeemer while neglecting God the Creator, but I do know that we are missing something wonderful.

The Celtic saints would agree. The Celts saw God’s handiwork clearly in nature. They expected God’s creation to communicate about the One who made it. To them, a shamrock spoke of the Three-in-One God, and the stars and sun spoke of God as light. They heard the “voice” of the Creation praising God all the time, and they joined in.

They understood that the supernatural realm is very close to the physical world; in fact they believed and experienced the spiritual world touching our world in certain places. They had a name for the places and times when the spiritual world was most near: “thin places.” Water, oak forests and mountains were considered to be “thin places,” as were saints’ birthplaces and sites of past miracles and extraordinary events.

The significance of “thin places” drew the Celtic Christians into frequent pilgrimages. Celts valued travelling for a spiritual purpose, to visit a place or places where God might be close by. In addition, the profound connection that the Celts felt between their lives and God’s creation spilled over into their art. It’s no accident that there are rabbits, mice, lizards and fish drawn between the lines and around the edges of the pages of the Book of Kells, a beautiful illuminated manuscript of the four Gospels.

Sister John Miriam Jones, in her book With an Eagle’s Eye, writes that their sense of God’s presence and love experienced through the creation led the Celts

“to artistic expressions using metal, wood, stone, paint, words, and music. These wholehearted art lovers found countless ways to utilize the arts in expressing their beliefs and their love. The monastic era coincides with the production of the best of Celtic metalwork, manuscripts and sculpture – all of which attest to their awareness of and yearning for God’s immanent presence.” [1]

She believes that all of this creativity and artistry come from the truth that “deeply felt love requires expression.” [2]

The Celts saw in the creation the deep love of the Creator, and they felt moved to create also. Their art was deeply symbolic. The Celtic knots that have become so popular in jewelry and art and symbolic of the love of God, which has no beginning or end.

Celtic Christians listened to the “voice” of Creation, and that voice called them to honor God by expecting to find God everywhere, especially in thin places. The “voice” of creation called them to create beautiful art that manifested their love for God. We have so much to learn from them.

Discovering the Rule of St. Columba.

When I Met St Benedict