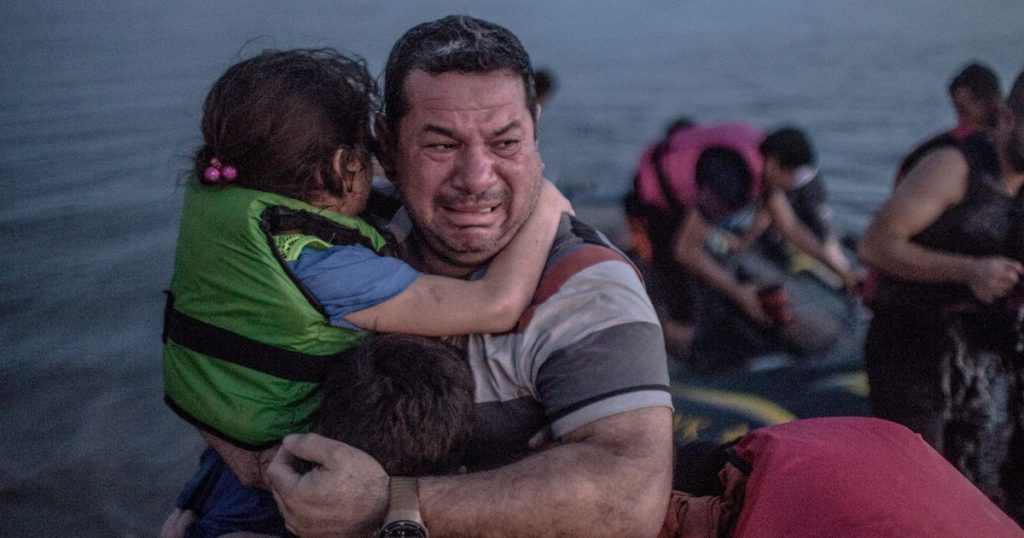 There are few who haven’t been moved by the visible anguish of Laith Majid as he and his family finally landed safely on the shores of a Greek island. Clutching his little ones, he arrived drenched and freezing in a rubber dinghy barely afloat, with an entire nation’s pain written on his face. His bravery and suffering awakened my heart like a stinging slap of icy salt water.

I wept for him. I tried to imagine what it was like to be him.

I have never been so very desperate as to dare to bring my family and others across a huge sea in a rubber dinghy meant for 3.

I have never had to leave absolutely everything behind, showing up in a new land as a pauper with children in tow, fully dependent on the good will of others.

I have never had to test the courage it takes to simply choose to live.

It’s easy to go throughout my busy week and forget that millions of people live on this planet with refugee status. The UN says that there are “currently some 43 million uprooted victims of conflict and persecution worldwide. More than 15 million of them are refugees who have fled their countries, while another 27 million are people who remain displaced by conflict inside their own homelands — so-called ‘internally displaced people’.” The sheer numbers of desperate people are overwhelming. They are people who love and are loved, people who have hopes and dreams. And for the many who are housed in refugee camps, generations will pass before anything really changes for them.

I don’t believe we forget because we don’t care. A good many of us are simply trying to love God and our families, do our jobs, pay our bills, and surf the ups and downs of our lives. It’s not lost on us that in America we have it pretty good.

But here are desperate human beings asking the world for help.

This brings up lots of legitimate questions and concerns. How many refugees can a local economy take at once? How do we designate resources for all the people in need? Is there enough to go around? Is there enough for us? And what if they have terrorist leanings? Are we inviting the horrific cruelty of ISIL into our midst? We all know that the political struggle over the issues has been divisive and brutal.

I’m tired of arguing a “side”. I can only dare myself to gaze at Mr. Majid’s face and encounter his need. It scares me.

I am grateful that we have our stories, our sacred narratives that can speak to the humbling truth that I have no idea what to do. The refugee situation is a worldwide crisis. The battle of the Left and Right keeps us stuck. But I have been reading some of the work of theologian Walter Brueggemann who brings us to the stories that deal with overwhelming pain and stuckness.

[Note: These next paragraphs are my attempt to synthesize and summarize Dr. Brueggemann’s brilliant words and work from The Prophetic Imagination. The first edition of this book was written in 1978 but I find it uncannily fitting for today. Any and all brilliance in the following paragraphs is purely his.]

The story of the Exodus is a powerful point of identity for Israel. They had been were slaves in Egypt. They had become accustomed to life under Pharaoh. It was the only social reality that could be imagined. Even the religion of the Hebrew people was subverted to work for the Pharaoh’s purposes to keep the machinations of his kingdom moving. Life was hard but at least there was work and food. But Israel cried out under their bondage. And God heard.

In the stories that follow, we see that the claims of Pharaohs’ empire are ended by the disclosure of the freedom of God, that is, that God is not beholden to maintain the purposes of the dominant culture. God is not captive to anyone’s social perception or purposes. The God of Moses subverts the comfortable reality of Pharaoh and sides with the oppressed and the marginalized. The God of Moses dismantled the politics of oppression and exploitation by countering it with the politics of justice and compassion. The Hebrews found themselves being formed into a new way of being, to match the vision of God’s freedom.

The revolution of Moses was sustained for generations (with some significant ups and downs) until under King Solomon, Israel itself became “empire”. The kingdom of Solomon was one of incredible affluence. Whereas the alternative consciousness of Moses arose in a time of scarcity, there were enough consumer goods in Israel under Solomon to remove much of their anxiety about survival. The alternative consciousness brought by Moses began to lose ground. It is difficult to maintain a revolution of justice and freedom when there is satiation. In our own economy for example, says Brueggemann, it is hard to maintain passion for civil rights when we are so overly fed.

However, he continues, the great Solomonic achievement was achieved by oppressive social policy. The affluence was hierarchal and unevenly distributed. Brueggemann also suggests that the religion of the Hebrews once again became a static religion in which the freedom of God was subverted into servicing the purposes of the King. He calls this a “religion of immanence” which means that the prevailing idea was that God was at the disposal of the King. When religion becomes static in order to maintain the purposes of empire, the people are conditioned to become afraid of anything that might change the status quo. The passion for real freedom and justice has been co-opted for lesser things. Those in power know that all it takes to counter an alternative consciousness is satiation.

Brueggemann describes the effects of the empire’s numbing satiation of the people: In the royal program of achievable satiation there is a religion of optimism in which God has no business other than to maintain our standard of living. There are no mysteries to honor but only problems to be solved using the cost accounting of management mentality. The value of a soul is calculated by statistics and financial speculations. This numbing satiation also requires the annulment of neighbor as life giver. It imagines we can “live outside history as self-made men and women.”

America, in all her splendor, is not unlike the empire of Solomon and Pharaoh. We boast unprecedented affluence and yet, the distribution of such affluence is extremely inequitable. As with Solomon and Pharaoh, the working class supports the upper echelon. American Christianity has in large part become conflated with the American dream, the religion of optimism. Being self-made and pulling yourself up by your own bootstraps has become a religious value. American Christianity has become static in that we cannot see beyond our infighting to imagine a different reality this side of heaven. In our sleepy satiation, pockmarked with bouts of fear, we only can see to preserve ourselves.

But just as it was with Israel, it seems we have come to a time when God has tired of indifferent affluence. Like the prophets of old, the sopping, traumatized travelers that are washing up on the earth’s shores serve as a means of startling our hearts awake beyond our fears, our politics, and our comforts. The reality of human suffering – all of our suffering- can awaken us to seek a better vision that matches the freedom of God.

Even as empire lives by numbness and controlled perceptions, Jesus penetrates numbness and enters into the hurt of desperate people, and eventually comes to embody it. He reveals a very different value system than empire, where the outcast and the loser are the valued ones, where he calls into question even all moral distinction on which the society was based, and where he transforms through his own vulnerable solidarity with poor, empty and grieving.

The answers we seek lie in the awakening of our consciousness. Our future is not bound by this present. It cannot be assured or guaranteed by the values of empire. However, Jesus shows us the way to this alternative consciousness, this new mind. It is the way that empire can never imagine. It is the way of self-emptying. Jesus does not numb himself to the pain of the hurting; he joins it. He is mercy.

Brueggemann says that the future is an unqualified yes from God. God is free from the mechanistic ways of our best systems, our “what if’s”, and our fears around fairness and deservingness. If we believe this is true, we are also free to imagine a reality different from the one we have created. We are free to risk and to enter into the pain of the refugee. We are free to awaken the passion of mercy.

“Passion is the capacity and readiness to care, to suffer, to die, and to feel is the enemy of imperial reality. Imperial economy is designed to keep people satiated so that they do not notice. Its politics tend to block out the cries of the denied ones. Its religion is to be an opiate so that no one discerns misery alive in the heart of God.” The misery of Mr. Majid is the misery of God. As we awaken again to the freedom of God, we may just find a way to join Mr. Majid there in God’s aching heart. We may awaken enough to dare to imagine God’s alternative reality, and we may just heal the world.

Meditation Monday – Listening After the Storm

Listening: Bringing Our Attention into Focus