It was already a busy week when I got the call, “Hello, Andy? Vincent (not his real name) needs to get to the hospital right away. Can you come help me?”

It wasn’t the first emergency in Vincent’s life. In fact, in the past year he had been on life support two times and not expected to live. It was summer, the Hood River Warming Shelter was closed, and I was busy. But Vincent wasn’t just some “homeless guy”; he was a friend. One of the important aspects of how we run the shelter is to remove the stigma of homelessness by breaking down the “us – them” mentality and understanding that it’s only us.

Vincent was not “like me”. And yet, the more I hung around him, the more alike I realized we were. I didn’t really want to get involved in another crisis. I had enough going on. But “Yes” was the only answer.

I was thinking about this story as I reflected on this month’s theme: Listening. Really it was listening that got me into this. At the time it was listening both to the plea for help from Vincent’s wife as well as listening to the quiet voice of God to get involved. None of this was about guilt but more about God pulling me out of my self-centeredness and into the lives of others. God was inviting me to love both God and neighbor.

As I pulled my car into the camp I could see that Vincent was in distress. He would drift from lucidity to completely passed out. Over the years alcohol had ravaged his body, and his body was now screaming, “Enough!” With a bit of work, we loaded Vincent into the car and rushed off to the hospital. After a few hours there, it was decided they couldn’t help him in the way he needed, and he was rushed to Portland for further care.

Vincent drifted in and out of consciousness as he lay on his bed in the hospital. It appeared that the damage to his body had reached a tipping point and could take no more. But he hung on… and on… and on. Then a remarkable thing happened: he began to get well. Just over a month after he entered the hospital, Vincent was released. He still had no home to go to, but he was alive! And when I say “alive”, I mean truly alive. After over a month of forced sobriety, Vincent’s deep blue eyes sparkled, his mind was sharp, and he was beyond happy.

Life hadn’t gotten easier either. I really don’t know how he managed it, but as his wife and a campmate continued to suck down Hurricane beer, Vincent stood firm in his resolve not to drink. Soon he was hired as a dispatcher for a local taxi service. Although Vincent had always been a very upbeat person, I had never seen him so energized and happy.

Here’s the thing: I could have said no to that phone call. I could have stopped up my ears to the voice of God and the plea of my neighbor and friend. I could have done that and received praise for setting boundaries from some who thought I was already over-involved. But I would have missed out. I’m sure if I had responded, “I’m sorry, I just can’t do this today”, they would have found someone else. I was not Vincent’s savior. But God interrupted my life and invited me beyond myself. And what God invited me into was more than I could have ever asked or even imagined.

I wish that’s how the story ended. I like happy endings. But life is messier than that. 73 days after Vincent’s last drink he had a “cardiac event” while on the job, slipped into a coma and was placed on life support. Over the week that followed many friends came to visit him. For all the difficulties in Vincent’s life, he was deeply loved. A decision was finally made that it was time to take him off life support. As his closest family and friends surrounding him, we said our goodbyes, joined hands, prayed, cried, and watched as his last breath escaped his lips. It was finished.

Like so many living on the streets, Vincent was a follower of Jesus. Like all of us, he wrestled with his demons. It would be easy to surmise that his demon had won, but that would be so far from the truth. Although alcohol ravaged his body, Vincent lived his final 73 days in victory. He inspired so many of us with his joy, laughter, and those penetrating blue eyes that seemed to grow brighter every day he was free from his demon.

I miss him. It’s been nearly three years since his death, but every once-in-awhile I still catch myself looking for him at the places he used to hang out.

Through this experience God taught me to be awake, to listen, to look, to expect holy interruptions. They actually happen all the time, but we have to have eyes to see and ears to hear. What at first may appear as a disruption to routine may actually be God’s invitation to participate in something beautiful. Are you listening? 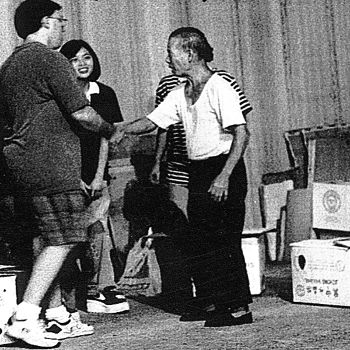 Mr. Lee is another friend who lived outside. I met him on the streets of Hong Kong where, with other friends, we shared many a conversation.

In Memory of Mr. Lee

Cardboard furniture
Warm hand outstretched in greeting.
Who would have thought this pearl of friendship
Would be hidden in a simple box of rice,
Purchased with only a few kind words?
Rats scurry for food
Carelessly tossed on the cool, damp concrete.
For ten years this was home.
For two years a place of fellowship
Where those filled with Jesus’ Spirit
Encountered another created in God’s image.
For eight long years
Tossed aside by the masses
Despised, rejected, familiar with grief.
But for those with eyes to see,
A painful reminder of how easily we
Abandon the One who fashions us in His likeness.
Mr. Lee, I will miss you.
Slipping from life just as you lived,
Alone, unnoticed by passersby.
For a short while we shared this journey of life.
Your home is now swept clean
The brutal efficiency of the city
Leaves no trace
That this corner was once a place of worship.
And yet here,
In the midst of the crowds, dirt, rats, and cardboard
We both encountered the love and grace of God.
May we meet once more
At the feast of God,
The banquet of life
Where death, sorrow, and crying are no more.
AFW

The Practice of Listening

Shine into the Dark Crevices of My Soul

International Day for the Eradication of Poverty

How Are You Mending Your Neighbourhood by Edith...

Are You A Cognitive Miser by Edith Yoder

A Child’s Perspective on Homelessness by Edith Yoder