Saint Columba – Being Present in the World 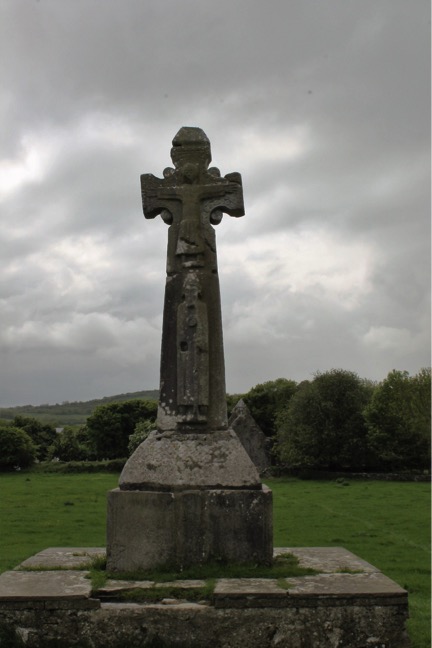 When Denise and I were on our honeymoon in Ireland (May 2014) I took this picture of Saint Tola’s Cross near Dysert O’Dea Castle. At the top is a fully clothed crucified Christ. Below this is a carving of what is believed to be Bishop/Saint Tola with a pointed mitre. He founded the monastery around 700 CE near the present castle. The cross was erected in the 11th or 12th century. This was my second trip to Ireland and this time I was able to explore the land more fully than before (twelve days versus four). We both fell in love with Ireland, her people, the landscapes, and the history. In many ways it was hard to leave when our visit was over.

If we felt that way after ten days, I can’t even imagine how Columba and his band of twelve felt as they watched their beloved Ireland fade into the distance as they made their way across the sea to what we now know as Scotland. The reasons for his departure are shrouded in mystery as most of the lives of these early saints are. If you want a very good book with exceptional study and insight into Columba and the story of Iona, Ian Bradley’s “Columba: Pilgrim and Penitent” is a great source.

As I read the various stories about Columba from Bradley and other sources, I was struck by the complexity of the man who some say should have been the Patron Saint of Scotland. Here was a monk who had royal blood flowing through his veins. During his time as the Abbot of Iona, Columba was a diplomat, politician, abbot, and priest. He moved in and out of the political arena (with the aim of stopping the bloodshed which ultimately hurt poor folks the most, as it does still today) and seemed to balance the monk and the warrior-aristocrat within.

The emphasis of Columba’s ministry and the monastic ministry of his time was not simply being isolated from the world and saying your daily prayers. Praying the Daily Office, Celebrating Mass, and copying holy books in the Scriptorium were a very important part of their vocation. Examples of the fine work of these Irish monks are with us today in the Book of Kells and the Book of Durrow (which are both housed in the Library of Trinity College in Dublin). However, the ministries of hospitality and presence were equally important in their vocational life.

Ministry of Presence for them was being with the people, not by proselytizing and preaching like so many do today, but by simply being there with the people. Monastic communities were a place of safety and refuge, as well as a place of spiritual and physical care. In Columba’s day, you didn’t build monuments to yourself (thinly veiled as, “oh but we are doing this for the glory of God”), you lived and worshipped in simple, functional spaces. Their huts and churches were built from wood and mud or stone. They were built to be functional, not ostentatious. That was because the monk and the monastic community’s primary duty was to be present to God and present to neighbor.

Continuing to reflect on Columba, I found myself thinking about my own vocation as a military chaplain and now a pastor. In the Air Force Chaplain Corps we had two phrases that were supposed to be touchstones for us. The first was “Ministry of Presence” and the second was “A Visible Reminder of the Holy.” I am as comfortable worshipping in beautiful sanctuaries like the one in the church where I am now serving as pastor (Presbyterian Community Church of the Rockies in Estes Park, Colorado), in an Eleventh Century Church (St Mary’s Parish Church in Croughton, England), or outdoors or in a tent in the middle of nowhere (courtesy of deployments and training exercises with the military). The majority of my ministry was, and continues to be, simply being with and walking with people.

Are you, dear reader, hearing the call? The call to live differently from the world and yet to live within it? The Christianity of Columba was not about detachment or escape from the world. It was grounded in prayer, Scripture (especially the Psalms which reveal the wide array of human emotions and interactions with God), and action. In the words of Bradley, “Columba calls the church to be political and prophetic, not by making easy moralistic statements but by costly engagement in the world.”

Columba challenges me to constantly re-evaluate my own life and ministry. He challenges me to dig deeper into the spiritual life and to walk boldly into the messiness of the world with the healing balm of Christ. Are you willing to let him challenge you?

Plunging the Depths for Ears to Hear

Saint Columba is close to my heart, as is the sacred isle of Iona. This is a lovely piece; exuding the heart of its author. I am so happy to see the Good Padre’s voice being carried further. Saints abound! What a pleasure to read this here!

Thank you so much, dear Sister ❤️❤️