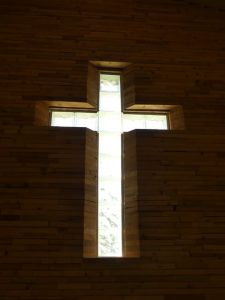 Biblical spirituality says there is still a source that reveals the voice of the living God. It asserts that God is not done with the business of revelation and creation but instead continues to have something to say and something yet to be accomplished in the very culture that isn’t sure if God is done speaking. We have muted, muffled and, in some cases, silenced the voice of God because we have forgotten to listen in the ways and places where God’s voice has always been heard. I hope to recover a way of practicing spirituality that has been silenced for some because we have lost our listening; we need to re-create another way of listening. And I confess, I am not only a product of a culture that silenced the thunder of God’s voice; I have myself done it for others. I don’t sit in any seat outside looking in from a comfortable perch; I have helped to foster practices and a culture of silence.

In an earlier time of my life, there was a question that blared its answer on radio, TV, magazines, pulpits and talk shows across North America. Started as a question in academia, it soon was asked on street corners and in libraries, coffee shops and offices: “Is God dead?” Philosophers, theologians and curious on-lookers concluded yes. I listened in on the conversations too, and I wondered: Did God pass away in the night, or over the centuries as humankind outgrew our need for an all-powerful deity? Did God die because we found new technologies, medications and innovations to replace God as creator, healer and redeemer? It never seemed to me to be a question about God as much as about people. . . .

Even in Seattle, a city nourished by what I call REI spirituality, a coalition of environmentalism, social consciousness and tolerance for all differences, I still find a hunger for something that isn’t filled by our care of Mother Earth or the poor or certain other marginalized peoples. Perhaps the question in our day is no longer “Is God dead?” but “Where can God’s voice be heard?” Most people aren’t really fooled by the notion that humanity is all that exists, that humanity is the final answer to the questions asked across the centuries. I find that most people are hungry for something more, something deeper, something beyond. In my experience most people believe that God is alive, but they wonder if God has lost his voice. Sermons speak of almost everything except a continuing conversation with a living God. Books, articles, blogs and social media are full of the continuing search for the Spirit that has been our human quest from the beginning; we readily speak about God or for God when it seems our longing is to speak with God.

You can tell that I’m not buying any of this because there was One who showed us another way to listen. His name was Yeshua, or Jesus as he is known to most of us. Early followers made outrageous claims that he not only spoke for God but he knew God and even was God wrapped up in a human body, which certainly complicates things. The entire weight of the Bible tilts the story to him. It says that Jesus knew something we need:

He was in the world,

the world was there through him,

and yet the world didn’t even notice.

He came to his own people,

but they didn’t want him.

But whoever did want him,

who believed he was who he claimed

and would do what he said,

He made to be their true selves,

Jesus is the pattern or archetype of spirituality as it shapes people into our “child-of-God selves.” A teacher named Paul said, “He is the image of the invisible God, the firstborn of all creation. . . . For in him all the fullness of God was pleased to dwell” (Colossians 1:15, 19). Listening for the voice of God is not simply waiting for an audible voice; it is also spending time in the presence of the teacher, Jesus, whose teaching speaks loud enough for all of us to hear.

Today’s post is taken from chapter one, “Resonance” of Keith Anderson’s book The Spirituality of Listening.

To Listen, Learn to Be Still

Saint Columba – Being Present in the World

Finding Beauty in the Ashes of Lent –...

Thanks Keith – its funny because I wrote about listening just last night on my blog. I read you piece this morning. It was a great spiritual perspective to what had been on my mind. God must be saying something to me.
http://frombluedot.com/two-ears-one-mouth/

I think this is a season when God is peaking to many of us about the need to listen more.