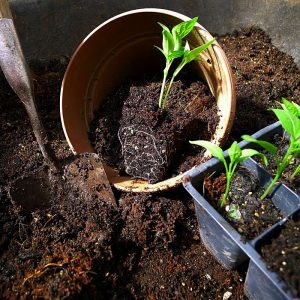 This verse was swirling through my head as I re-potted plant starts. I imagined the roots trying to burst the pots as they out grew their containers. For many of my plants, it’s important to start the seeds in smaller containers so you can more easily monitor temperature and moisture. But as these plants grow, if it’s still too early to set them out into the garden, they need to be re-potted so the roots don’t knot up (become root bound) and the plants become sick.

As I re-potted my plants, I thought about the fact that all these roots sprang from the same seed. From that tiny beginning I already had a bundle of roots too numerous for their current container. A good start is essential to the overall health and longevity of a plant. Without a good start, the gardener is often forced to start over from scratch. But with a good start, she can soon set her sights on the future. 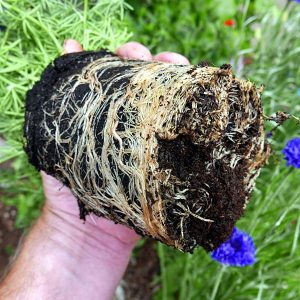 As the plant grows, it would be silly to keep it confined in the small container it was started in. Attempting to keep the plant cramped into such a small box would certainly lead to diminished growth, weakening the young shoot and crippling it from reaching its full potential, possibly even killing it altogether.

What seems obvious as a gardener is not always obvious when it comes to the spiritual life. When a new movement of God comes around I’m quite content to try to squeeze this new wine into old, inflexible wineskins and go merrily on my way. But by failing to look closely at the underlying assumptions associated with that old wineskin, I’m likely restricting the move into new things that God is offering.

I began to wonder how many times I’ve given up on something I thought was of God but got frustrated with it because it just wasn’t working out. Maybe God was calling me to step into a completely different container. Maybe what God had planned was just too big to fit into my puny assumptions. Maybe God was calling me into a little soul-soil disruption so that my roots could be un-bound, so that I could thrive in a new work that was bigger than I could ask or even imagine (Eph. 3:20).

Two Dangers: Moving On Too Quickly and Being Reluctant to Move at All

We live in times of constant change. When it comes to consuming, we’ve bought into the lie of “New and Improved”, purchasing new things before the old ones have worn out and salivating over the next new gadget to make our lives “better”. I’ve seen this issue infiltrate churches as they flit from program to program, the “latest great idea”, before giving the last “great idea” a chance to prove its worth. Whether springing from impatience at not seeing fast enough “results” or the perceived need to always be on the cutting edge, moving forward too quickly can kill a community just as effectively as an unwillingness to change.

Back to my garden: I re-pot my tomatoes at least once, often twice, before they go into the yard. With tomatoes, a few things are at play. There’s a kind of incubation period in the greenhouse as plants develop below and above the soil. Plants take time to develop a healthy root system before they’re ready to be set out in the garden neighborhood. Both the plant and the garden neighborhood need to be ready.

With tomatoes there’s another interesting element at play. When I re-pot the plant, I carefully snip off the bottom several branches and bury the plant half-again its height into the soil. This approach appears counter-intuitive at first. Now my plants are half as tall with fewer branches and less foliage. But all those tiny hairs on the stalk of my tomato plant will now form new roots, easily doubling the root system that nourishes the plant. What’s lost in initial height is more than made up for in health and stability for the long-term.

Even before I plant the first seed I’ve closely observed my garden environment. I’ve pre-determined which plants will grow best, where in my garden they will be located, and what “neighbors” I will plant near them. Once the seeds are planted I need to monitor the plants and determine the right timing for re-potting. I need to read the environment outside and decide, based on the weather trends for this season, when is the best time to transplant them outside. With my tomatoes, I have the added opportunity to enhance their ability to thrive by further developing their root system prior to moving them into the garden. It’s not just a matter of a new pot or a new wineskin.

Looking back over my church and community involvements over the past thirty years, whether in Seattle, Hong Kong, or Hood River, I realize just how important these lessons from the garden are as I find myself asking:

What are your thoughts?

Collaborating for a Brighter Future

Embracing God’s Light as Hope in our Lives

Got Vegetables? We certainly do!