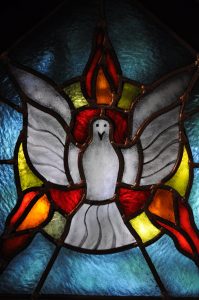 Several years ago, as we dawdled over pancakes and eggs in an upstate New York diner, I debated with a friend about the nature of the Trinity. I thought I was being flexible when I said that three wasn’t the crucial number for me, that God could be expressed in four or five or even more aspects, that the persons of God could multiply well above three. “Ah,” he said, “but could it be fewer?” I was startled by that question, but I knew the answer immediately: “No.”

I’m not one who spends much psychic energy on doctrine, but I care a lot about community. That’s why I love the Trinity, because it shows us that God’s fundamental identity is communal. God does not exist as an isolated being, or even as an exclusive pair. The Trinity reveals God’s inclusive nature. And we are each individually created in the image of God, yes, but we are also created as a community in the image of God.

Part of the reason I don’t pay much attention to some doctrinal arguments is that they don’t seem to matter much in the ordinary lives and struggles of most believers. But for me, understanding the Trinity does matter—if God is an inclusive community, then we are called to manifest inclusive communities in our own lives. We are called to invite others in, to acknowledge not only their creation as images of God but also to realize that our communities reflect God more and more fully as they become more and more inclusive. Yes, I’m talking here about people who are different from us in broad sweeps—race, class, gender, sexuality, etc.—but I’m also talking about closer, often more irritating differences—the kid who plays his bad music so loudly, as if to drown out his bad muffler; the old guy next door who gripes so much when a child’s ball rolls onto his lawn; the neighbors across the way who litter their yard with multiple campaign signs for the wrong candidate. The Holy Spirit enlivens each one of them, and God speaks to all of them in their own languages.

One of the greatest Biblical values is hospitality, and the Trinity embodies that value. Differences not only coexist but are actively welcome. As images of God, we are united through that welcome, not through some superficial similarity. We are called to recognize humanity in community, just as God reveals divinity as community. The reality of the Trinity confirms that God does not exist outside of relationship.

What metaphors would you create to express your understanding of the Trinity? What images can you offer to help the rest of us deepen our devotion?

Praise to the Trinity, in Four Movements

Meditation Monday – Five Tips for Paying Attention to Your Life.

Praise to the Trinity, in Four Movements

I believe it is about relationship as well and that is my focus when I discuss the Trinity in sermons or in teaching.