Salvation is Not Enough 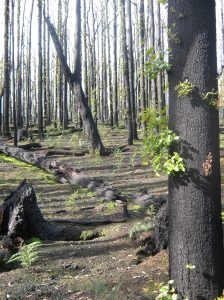 In Christian circles, we generally place primary emphasis on believing in Jesus. After all, Acts 16:31 tells us that whoever believes in the Lord Jesus will be saved.

But what are we saved for? And what if God believes in us as well as us believing in God?

I have seen an encouraging move in the Church in recent years. It is a move which sees the Gospel as so much more than a ticket to heaven when we die. I think the Church is finally starting to see that our ultimate destiny is not a place in the sky once our life on this earth is finished.

We are discovering the biblical story again, the story that our ultimate destiny is a renewed heaven and earth brought together by God where God dwells with us and we live in a physical world with physical bodies where God’s rule has finally won the day.

Until then, God has saved us to participate in preparing for this new world, preparing for God’s kingdom to come on earth as it is in heaven. That’s why works of justice and caring for creation go right to the heart of the Gospel. They are part of preparing for the kingdom. In other words, God has given us a job to do.

Discovering this biblical narrative some years ago finally opened my eyes to the meaning of a cryptic conversation that the resurrected Jesus had with Peter as they walked along the shore of the Sea of Galilee one morning.

Imagine what must have been going on inside Peter’s head. He would still have been reeling from the shame brought on by his vehement denial of his Lord just days earlier. His shame may even have been exacerbated by finding out that Jesus was now alive again.

On that fateful night before Jesus died, it is Peter, thinking only of himself, who pretends to the onlookers that he has never even seen Jesus before. It is of course when the rooster crows that Peter is confronted with the fact of failing his best friend. His bitter, painful remorse is then shown for all to see.

How would you have felt if you were Peter in that situation? You’ve just spent the best years of your life with the person your people have been waiting centuries for. He has chosen you to be one of his closest friends, he has stood up for you, affirmed you, and shown you a quality of life you never thought you deserved. But when he needed you, when the roles were somewhat reversed, you failed him. Can you imagine the shame of that? Can you imagine the bitter remorse?

For Peter though, and for all of us who have failed, it doesn’t end there. As is his character, Jesus gets alongside Peter and restores him. It all happens in a strange little passage at the end of John’s gospel.

Jesus is walking with Peter along the beach, and does something which seems quite odd. He asks Peter if he (Peter) loves him. Peter responds, saying “you know I love you.” But then, Jesus asks Peter the same question again, and then again! Three times!

What is going on here? Is Jesus so emotionally insecure that he needs the affirmation of his best mate three times before he will believe it? Far from it. It is Jesus who is affirming Peter, not the other way around. The three questions Jesus asks correspond to Peter’s three denials just a few nights before. Jesus is restoring Peter. He knows Peter’s heart; he knows that despite Peter’s failures, the outspoken disciple still loves Jesus beyond measure.

Jesus trusted Peter, the one who had failed him so badly, to be a pillar of the new Christian movement. Rather than getting him to step down because of his failures, Jesus told him to step up. This was affirmation, forgiveness and trust of the highest order. Peter had failed the Son of God so spectacularly, and what was Jesus’ response? Jesus believed in Peter, and gave him a job to do.

Anyone is welcome to serve at the feet of Jesus. God knows I have made many mistakes over the years, but God still chooses to use me. That is not big-noting myself, it is actually cause for humility, that the Source of all love and hope would use even me to work to bring that love and hope into this broken world.

Your history doesn’t have to be your destiny. Jesus restored Peter because he believed in Peter and wanted him to enjoy the privilege of playing a part in working for God’s kingdom.

Easter is not about salvation on its own. It is about restoration, transformation, and renewal. Through the life, death and resurrection of Jesus, we are restored, renewed and transformed, so that we can live out our destiny of restoring, renewing and transforming the world. We are the most fortunate people in the world, and it is with this privilege that we continue to fight for a world in which the love of God rules the day.

Food Is Both a Pleasure and Our Salvation