The Stones Still Cry Out 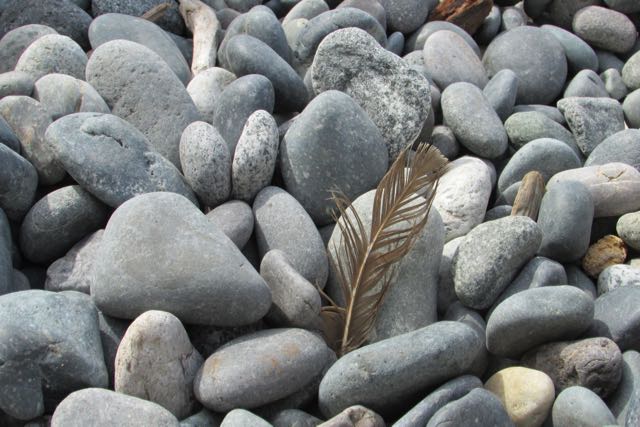 Jesus spoke with gentleness to people whose lives were precarious and unpredictable. His people understood subsistence living in a way that we Western, privileged, modern people simply cannot. They were deeply dependent on the patterns of weather for harvests and the health of their herds for food. Jesus understood their anxious hearts, and he pointed them back to creation. “Consider the birds, consider the lilies,” he said. He assured them that God knew their needs and yet, there was another way to live without so much fear.

People of modern societies can barely envision their world. Imagine the electric surging of neural pathways in the minds of ancient peoples as they pondered creation, trying to make sense of the explosions of thunder storms and bursts of fresh rain, hearing the first cries of a newborn person, and spying a glimpse of green shoots pushing up through the soil after the scarcity of winter. In their eyes, the world was extravagantly miraculous. They knew both awe and fear in their deep connection with and dependence on this garden home and the forces unseen that guided its ways. They instinctively knew there was something bigger than themselves. They intuited both their earthiness and their connection to spirit. On a deep and primal level, they knew the Gardener.

In our time we have learned to know in different ways. The Christian church first took its eyes off of the cosmos as a means of knowing God after we learned that the universe was not as static and fixed as once thought. (And they have only just forgiven Copernicus and Galileo a few decades ago for pointing that out.) Much of our early theology had been shaped around that understanding of the cosmos as static and fixed. If the cosmos was static and fixed, it followed then that God and God’s ways must be static and fixed. If that certainty was gone, how could we possibly understand God now? So rather than look to the inconstant cosmos in order to know, we began to look at the mind. “I think therefore I am,” became the way to discern reality. We now stand apart from the cosmos in order to define, dissect, categorize and file everything scientifically and theologically. The cosmos, even the Earth we stand on, has become to us as mere objects to be studied, like dead rocks.

Jesuit scientist Teilhard De Chardin lamented, “The artificial separation between humans and cosmos is at the root of our contemporary moral confusion.” To distance ourselves from this humus, this humble earth, is to also distance ourselves from Spirit, from God. When we pull up our roots from the ground from which we were formed, we pull away from the interweaving of each other and all things, and from the web of relations in which God makes Godself known to us. We forget who we are. Our identities have become wrapped around much smaller things, like ideologies, money and power. Scientist and theologian Sr. Ilia Delio says that there is a profound connection between our loss of a shared cosmology and our increasing global problems. We grasp and hoard and worry, and others suffer, especially the poor.

So consider the birds, Jesus said. The cosmos still holds the roadmap. Just as we once were seized with awe and gratitude for the dance of spirit and matter that gives us life, shelter, food and drink, this same enlivened cosmos can speak to our postmodern minds. Science has continued to read the cosmos and has found once again the deep connectedness of all things. Quantum physics now gives us the evidence for what our ancestors always knew. In addition, we can see now that the universe is actually dynamic and changing, increasing in depth, complexity, and diversity, with new life always emerging. Even death is swallowed up as part of the ongoing cycle of new creation. Nothing is ever lost. Creation still offers us a lens through which to behold with awe that which reveals God in a way that is deeper and wider than ever before. Creation can help us reframe our old, static theology to create a new way of being together in this world, with this world.

Science now teaches us that nature and the entire cosmos are not composed of material substances as much as deeply entangled fields of energy. The nature of the universe is undivided wholeness. It is all interlocking fields. Everything is connected at the quantum level so how we act and how we think truly affects the whole. “Pick a flower on earth and you have moved the farthest star,” says physicist Paul Dirac. We are deeply entwined and interdependent. The cosmos and our place in it, this beautiful Earth, are reminding us that we belong to each other.
On a much simpler level, we can see that the Earth embodies and teaches forgiveness because even though we pillage, poison and pollute this planet, she stills bears us much fruit. If we are willing to see our Earth and the cosmos as a teacher again to help us know the Source of all Life, we will begin to see as poet Elizabeth Barrett Browning has said, that all earth is crammed with heaven. It is imbued with sacred meaning. We will learn to see God in the peach, in the light dancing on a lake, even behind the eyes of our enemy. We learn to worship with our whole lives.

The Earth teaches us a consciousness of interrelatedness without which Sr. Ilia Delio warns, “we do not see ourselves related to the poor, and thus we do not feel compelled to limit our consumer patterns to aid the poor or to develop alternate economies. Until we have a new cosmological narrative that binds us together in a new way, we will not change. In fact, we will continue to (implicitly) insist that the rest of the world become like us.” Awakening again to the realities of our deep connectedness in the here and now can re-animate our hearts towards mercy and justice.

The Earth will teach us how to heal.

Our earthly home is not a stopgap place for our existence. It is our mother, friend and teacher. It plays an essential role in the journey of becoming human, the Imago Dei. It calls us back to what is most deeply true about ourselves. We are at once both human and divine, temporal and eternal, sinful and precious, made of dust and destined for God.

Our earthly home is constantly being renewed and yet, she does not do this alone. We have been given the privilege of being co-creators and fellow gardeners along with God. We are therefore a necessary part of the Earth’s health and renewal. In our blindness to the preciousness of the Earth and her inherent ties to her Creator, we have made the earth very ill. Sr. Ilia Delio says, “[We] cannot sustain our first world footprint far into the future. The costs on the poor are deeply inequitable, and we are running out of resources.” If we are to love God and love others as Jesus once taught to anxious people, we must once again love and care for the Earth.

In these days many people still see the Earth as merely an issue to be debated and a commodity to be bought, sold and used up. But even though we have forgotten her, the Earth will continue to sing forth her song. Though we may lose our way and we are afraid, the stones will still cry out, Hosanna, Hosanna, Hosanna. The Earth is always telling the story of ancient and future time, and orienting us back to God. We just need to lean in once again, and listen.

(Written with all thanks to one who I will always consider my teacher, Sr. Ilia Delio, a scientist, theologian and nun who is an irrepressible fountain of hope.)

Prayers of St Catherine of Siena.