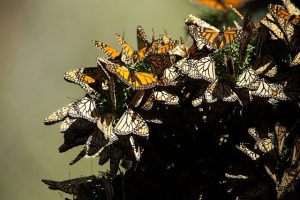 Butterflies from Pixabay, used with permission

I’ve never been a big fan of Chaos Theory. When people try to explain that a butterfly flapping its wings on one side of the world could cause a hurricane on the other, my common sense chip goes into overdrive and steam starts coming out of my ears. But if you tell me that thousands of people’s life or death can be ruled over by one tiny insect, then you have my attention. Because I know this to be true. One mosquito bite, in so many countries in the world, can pass on the disease malaria, meaning agonising periods of illness, sickness and fever spread over years, and even, especially in young children, death. Sadly, the charity Christian Aid estimates that one child dies every 60 seconds from malaria.

We know too that human enemies include the tsetse fly which carries yellow fever (also deadly to cattle) and that mosquitoes pass on dengue fever as well as malaria. If we are tucked up safely in our northern hemisphere, we are likely to feel at ease about such risks. It’s another one of those things that we imagine only happens in Africa, and we feel sorry about it, but having seen the cases featured on Comic Relief time after time, we imagine too that throwing more and more money at the problem doesn’t seem to help – I admit, I have felt this too. But our apparent safety from the world of insects is illusory, and our apathy misplaced. If you have friends with chronic illnesses, as I do, you have more than likely come across Lyme disease, passed on through tick bites, often picked up via a leisurely stroll in the woods. The effects, especially if the disease is not quickly treated, can be severe, long term and debilitating.

So how about some solidarity with those who suffer simply because of where they were born, or into a specific level of poverty, or because an infected insect happened to bite them, who knows why? Paul tells us, “From one man he made all the nations, that they should inhabit the whole earth; and he marked out their appointed times in history and the boundaries of their lands.” (Acts 17:26) and we might well take this to mean that the Lord is in charge of where we live our lives. I believe that is true, and I trust the Lord has plans that cover absolutely every last thing, and that he is a master of bringing order from chaos, brooding over the waters of our lives. But I don’t believe we serve the Living God by being fatalists. I believe that a lot of poverty is human-made, that because of free will we can wickedly flap the wings of our apathy and fail to relieve the suffering of our tiny brothers and sisters seemingly so far away. And I am preaching as much to myself in writing this piece, as I am expressing a longing that we might wake up to the impact we can have on the world if we truly want to be salt and light. I guess that is what the New Changemakers  movement that we are talking about this month is all about, and I want to be a part of that, in however small a way I can. Even if the air around my wings barely moves, perhaps if I join a swarm of butterflies, that cumulative movement might truly cause a storm of righteousness.

If you would like to make a donation to Christian Aid’s Malaria program, you can do so here.   Thank you.

Pouring a Gin and Tonic on World Malaria...