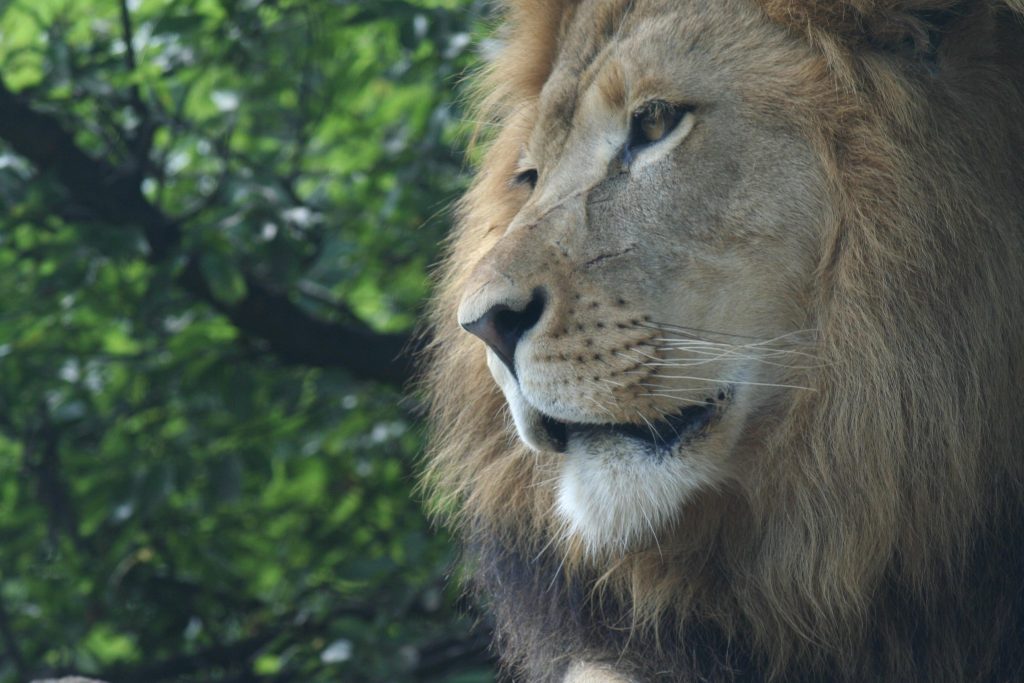 Lion by Alice10 used with permission

“It seems then,” said the Unicorn, “that there is a real Tash, after all.”

“Yes,” said the Dwarf. “And this fool of an Ape, who didn’t believe in Tash, will get more than he bargained for! He called for Tash; Tash has come.”

This is a scene from The Last Battle, the seventh book in The Chronicles of Narnia series. There had been a movement stirring in the lands around Narnia and finally in Narnia itself, that was built on fear, deception and hunger for power. Some, like the Ape, had helped to create a false god called Tashlan, which was a mash up of the name of one country’s god, Tash, with Aslan who is the King of Narnia and the Christ figure of the story. The puppet god Tashlan was used to frighten and manipulate the crowds, twisting what they had known to be true while manipulating both innocence and ignorance alike, creating anger, divisions and violence. Eventually they drop the pretense of “Tashlan”, and just use the name of what they truly served, the evil god, Tash.

It all sounds too similar to what we are witnessing today, in the form of Donald Trump, a self-identified Christian who speaks of a very strange Christ, as well as some of his followers. Just like in the Narnia story, Trump did not arise out of a vacuum. During the civil rights era from the time of Truman, the racist lesions on the American soul were increasingly exposed. Without going into all of it here, our history reveals a gradual movement towards a division in the political parties that was decidedly racially charged. Fear and resentment of the other has always been at the heart of our deepest wickedness. Fear and resentment of the other is described at the very beginning of our sacred narratives. The beautiful archetypal narratives of Genesis describe the loss of communion between man and woman, moving from a sense of unity to an identity that is now over/against one another. The sense of being bested by his brother stirred the man Cain to become the first murderer, eliminating one he had once loved.

We want what the other has, we fear what we have will be taken. We are very naturally people who project our discomfort and fear outward, towards one another. They are the cause of this trouble. They are the cause of my anguish. If I eliminate them, then all is right with the world again. It may happen through all-out war, it may happen by finding a way to jail thousands of black men, it may happen by silencing the voices of those who disrupt the status quo of power. There is something that rises up in us that sees difference and competing views and needs as a threat. There is something that rises up in us to snuff it out. It’s in us all.

I had the opportunity a few years back to sit and talk with Sr. Helen Prejean, a nun who works tirelessly to end the death penalty. She has been spiritual advisor and comforter to many a death row inmate right up to their last breath. There are many who feel that her compassion for the condemned is an act of betrayal towards the perpetrators’ victims and their families, and thus resent her. However, Sr. Helen never minimizes the horror of their crimes, nor the fact that they have a serious debt to pay to society. She does believe that we are not good or wise enough to mete out death as a means of punishment, because in killing the other, we become the very thing we hate. We diminish ourselves.

I had read her book and saw the movie based on it. I remarked on seeing how the main character, a rapist/murderer, was slowly depersonalized through the process of execution. It felt like they were hiding his humanity so that those who carried out his execution, whether in actuality or through some lesser agency, could be somewhat removed from the fact that they were also taking a human life. As a former nurse I wondered at the use of an alcohol wipe to clean his skin for an IV insertion. Why bother if he will be dead in a few minutes? It all seemed like a ritual of denial to protect us all from the dirty truth.

Sister Helen responded, “You get it!”

I wasn’t sure I did. What I did know that was that at that point in my life, if that man had done to my daughter what he did to another woman’s daughter, I’d want to tear him apart with my bare hands. I would not want to show any mercy. And if I could not physically do that deed, I think I would still feel a smug satisfaction at his end by whatever means.

But there are moments went you glimpse something so new and so light that you have to catch your breath. In those moments with Sr. Helen I realized that I had looked upon mercy right in the face. It was a mercy that did not lose its boundaries, for a great evil had been done, but it was mercy none-the-less. I saw that mercy moves in a whole new way. Mercy does not project its hatred, resentment, pain or fear onto another. Mercy does not need sacrifice to be satisfied. Mercy sees all things differently. And it was mercy that told my own heart of the same murderous impulses that were within me. Jesus confirmed the same in all of us.

And now we see impulses of fear, hatred and resentment welling up and roaring out from large numbers of people with hearts like mine -and yours. Wily politicians have been stirring deep, age-old resentments long before Trump appeared on the political scene. Deep divisions and disrespect have been at play for years, helping to create this perfect storm. Some of us pushed back, and some, perhaps too many, did nothing. In any case, we have collectively called for Tash, and Tash has come. We are reaping what we have sown. Violence is the logical outcome. Hurt the other, hurt the ones who are responsible for our pain! Hurt the ones who make me feel inadequate or who might want a piece of our pie. Take the power by force. Just today I read a quote by Trump that warned that riots would ensue if he does not get the Presidential nomination. And he is probably right.

But then, there is the path of mercy.

Now we come upon Holy Week, which is the journey towards crucifixion for Jesus of Nazareth. The Cross of Christ both exposed and predicted our current situation even way back then. We projected all of our resentment and fear and hate onto Jesus and put him to death. (He didn’t conquer the Romans! He’s letting in the wrong people, changing our status quo! He’s not impressed with my righteousness or riches!) The Cross is the inevitable end of our system of justice and it judges us. We kill that which makes us uncomfortable and that exposes our naked, selfish souls. Only that time 2000 years ago, we killed pure innocence.

And God responds to Christ’s gruesome death with mercy. St. Bonaventure once said that the two poles of the Cross stand in juxtaposition to each other, as does every human polarity we can think of – heaven vs. earth, rich vs. poor, gay vs. straight, male vs. female, black vs. white, Republican vs. Democrat, Christian vs. Muslim, East vs. West and so on. And Jesus does not resolve the great tension between the poles by eliminating one side or another, as we would do. Instead, Jesus is the mercy that hangs in between them, that holds the tension. In that space, he teaches us the way of mercy. He dies.

That’s Holy Week. That’s the way of the cross. While we are not facing a literal cross next week, we need to do some real dying, especially to our egos, that is, to the things to which we are most attached that keep us in animosity towards one another. It is not just them over there who are creating chaos and division. What would it mean to die to our political beliefs especially in this contentious season, and choose the common good? What would it mean to die to our religious beliefs? To our financial and nationalist idolatries? To our measures of good, better, best? To our demandingness, in that we are 5% of the world’s population that uses 40% of the world’s resources? What if we were to die to anything within our hearts that divides, casts out or withholds from one another? What if we were to die to it all? What would this nation look like then?

We live in a time of the rise of yet another great evil, the rise of a new fascism and its infelicitous offspring: want, violence, and ignorance. We can no longer treat the Cross as merely a free ticket to heaven and a symbol of being part of the “in” club. We must see it for what it truly is- the place where we received mercy for our murderous hearts, and a place where our own murderous impulses, in whatever forms they come, are finally put to death. In that light we can never again see the Cross as a symbol of separateness and exclusion, or as a call to rise up and defend our truth and our stuff and our tribes, especially at the cost of others’ wellbeing. It can only be the pathway to the end of strife. It is finally, the pathway to Peace.

Let it jolt us awake.

Then, we can be the Mercy in this world. We can be the ones in whom violence comes to an end, and radical hospitality begins, revealing the heart of God for all. This paradoxical path to new life and a new world is always downward first. Downward to death, so there can be Resurrection.

The Garden Journey Of Holy Week – From Suffering to Resurrection