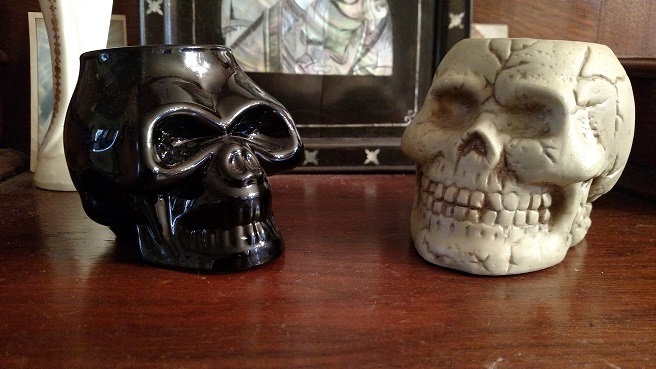 In the fourth chapter of his Rule, the chapter describing the spiritual tools for good works, St. Benedict calls his monks to “keep death daily before your eyes” (RB 4.47). In doing so—as with so much of his wise teaching—he was not expressing a new thought, but collecting and condensing spiritual wisdom passed down by broader humanity. This phrase comes through Cassian and the anonymous words of the fathers in a path that must also include the great Roman Stoic Seneca whose Letter 1 is a meditation on time and death.

Some of my favorite images of my favorite saints give this spiritual principle visual expression. Caravaggio’s St. Jerome sits at a desk on which a skull in prominently on display; in Zurbarán’s haunting “Saint Francis in his Tomb,” the cowled saint stares down at a skull cradled in his own hands. Many works of renaissance art include this motif to infuse a remembrance of mortality into the scene.

On my desk, I go one better than this. Seriously. They have one skull; I’ve got two! Unlike the skulls depicted in art, no one would suspect that either of mine are the real thing, though. Mementos of by-gone Halloweens, they both originally had candles in them, long since melted away. One is white ceramic; the other, black cut glass. They each have names. Each morning when I come down to my office to start work, I say hello to them, and think on a psalm passage.

In our spiritual tradition, the remembrance of death has multiple themes running through it, multiple spiritual purposes. Perhaps if I were a saint, one skull would be sufficient for me to grasp them all within a single object, but I’m not. Hence, I have two to remind me of two crucial principles.

The black cut glass skull is named Justin, a single name simultaneously indicating two pop stars. When I greet him, I think on Psalm 90:3-5: “You turn us back to the dust and say, ‘Go back, O child of earth.’ For a thousand years in your sight are like yesterday when it is past and like a watch in the night. You sweep us away like a dream; we fade away suddenly like the grass.” To me, Justin represents the fleeting, fickle, illusory desires that we chase in this world: fame, fortune, beauty, power. These are the lusts of this life. At the end of the day, they are fundamentally meaningless. A prayer book collect asks for grace to love things heavenly, the grace that “while we are placed among things that are passing away, to cleave to those that shall abide.” Because the grand scheme of things is great and grand, and we—no matter who are—are quite infinitesimally small in the midst of it all.

However, if taken too far this theme can drive us into a Gnosticism that denies the goodness of our created world, and an overly heaven-focused gaze that misses the opportunity to embrace things that abide even within our incarnate life: love, mercy, justice. So, after I greet Justin, I turn to the other.

The white ceramic skull is named Thomas, and is specifically named for Thomas Aquinas, the great Dominic theologian and author. As I say hello to Thomas, I think on Psalm 90:12: “So teach us to number our days that we may apply our hearts to wisdom.” Thomas represents the potential for goodness, for light, for flourishing that we possess if we have the discipline to structure our existence meaningfully. Our time may be short when viewed from God’s perspective, and we have no idea how much of it we have been allotted. But in that time, we have opportunities for love and joy, and—furthermore—to share that love and joy with those around us, all those whom our lives might touch. We have a duty to embrace our God-given gifts to continually point towards the reconciliation of all created things back to God as accomplished in Jesus Christ.

Although a learned academician and disputer, Thomas Aquinas wrote his principal work, his great Summa Theologica, as an introductory textbook, an primer for beginners. I think of all the things he could have written—could have focused his brilliant mind upon—and that likely might have been a lot more fun to write. And yet, what wisdom, what humility, there was in choosing a basic textbook as the pinnacle of his work.

Lent reminds us of our common mortality. That we die; that we will die. Meditation on mortality is not terribly in vogue these days. And yet, I find my simple ritual a helpful daily reminder: the life we’ve been granted is brief in the grand scheme of things—so make it matter. Let us number our days, however many or few they may be, that we might apply our hearts to wisdom, to peace, to love.

This is a timely, insightful, thought-provoking post. I love the way you introduce Justin and Thomas to us and how you’ve made death a subject of deep meditative reflection. Much of life seems to consist of denying its stark reality. Here you do justice to its importance in our thoughts. Thank you, Derek!

Having reached the age of 81, Derek, an age when death is just around the next corner, I can assure you that life is not just brief in the grand scheme of things. It’s brief, period. I salute you for keeping its prospect before you. We all should do likewise.