The Bus Ride to Sheol by The Rev. Rachel Taber-Hamilton 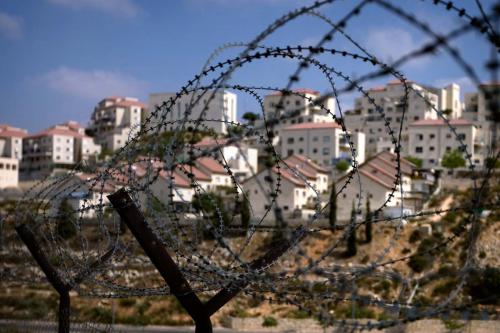 Our Israeli Arab Christian bus driver slowly navigated the winding road up into the hill country of Jewish settlements on the West Bank. Bruce, a late middle-aged American Jew who had immigrated to Israel narrated our journey over the bus’s sound system as our guide to the Jewish settlements of Tekoa (338 acres, and 1808 people, established in 1977) and Efrat (568 acres, 7454 settlers, established in 1980).

“The media, with their agenda of spin, calls these ‘settlements,’” Bruce opined over the bus’s sound system, “but what they are is neighborhoods, just like any you’d see in the states, and they don’t call THOSE settlements – they’re neighborhoods. They’re suburbs!  If this is like the Wild West, we aren’t the cowboys. We’re the Indians. This is our land!”

When our bus arrived at the check point entrance of what Bruce referred to as his “gated community,” armed Israeli guards greeted Bruce, who was carrying a holstered gun of his own.  As an Israeli citizen qualified as a security guard, Bruce was a settler whom Palestinian workers would call from the security gate to ask for armed escort into the area to work, in compliance with an Israeli Defense Forces regulation. 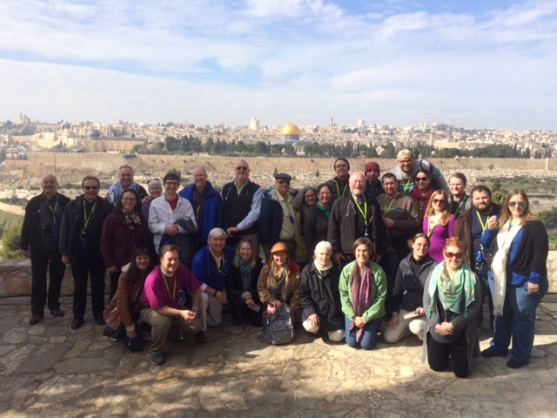 Our tour bus quickly moved beyond the check point and into the settlement. As Bruce spoke, my focus turned to the landscape of the hill country outside my bus window.

Semi-nomadic Bedouins had once roamed the area freely, finding pasture for herds of goats and sheep, but (we learned from an earlier presentation) they were now relegated to a category of land that the Israeli army uses as firing ranges. Palestinian families, for whom the area had been home to ancestral olive groves, grape arbors and grain crops have experience their trees chopped down and their crops burned.

I was reflecting on these things when the next words of Bruce’s ongoing narrative arced into my consciousness like an arrow to a hind, “We only build where there isn’t anything; it’s just wilderness here.”

With crystal clarity, I heard the righteous judgement of 18th century European sentiments expressed in numerous journals and legal documents of those who colonized North America. “It’s just wilderness here – no one lives here. There was no civilization here before we came. It is God’s will that we occupy this land. These people will behave in a civilized fashion (i.e. ‘live as we determine’) or they will die.”

I realized that what I was hearing from Bruce was exactly the same ideological narrative that my great-grandparents encountered in the European invasion of interior British Columbia – when their people, the Shackan, had their land and resources stripped from them because all that he settlers saw was “wilderness.” Native peoples were a part of that wilderness, just another resource to exploit or to destroy. In my blood and bones, I know how the story of Palestine ends.

As I struggled to reign in my overwhelming grief, the bus came to a stop in front of the house we had come to visit. Our pilgrim group began to disembark to enter the home of our Jewish hosts. We had come to hear more about the Israeli settler perspective.

I quickly found myself standing alone in the bus aisle, my hands holding on in white-knuckle grips to seats on either side of the aisle. I didn’t want to get off the bus. Indigenous peoples always know when they are the prey, when they are fixed within the gaze of a predator. I was caught within an historical déjà vu, and I felt endangered.

My anxiety rose quickly to the level of panic, and I asked one of the members of our group, to please go get my bishop, The Rt. Rev. Greg Rickel, who had already disembarked.  I don’t know what I wanted of him other than to grab onto someone that I trusted and wail in sorrow or terror. 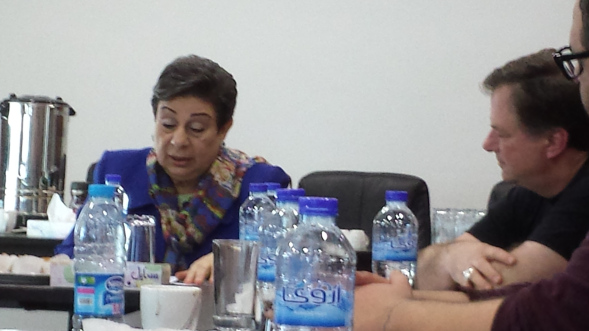 However, I began to feel foolish in my fear, so I determinedly pulled myself together and stepped off the bus. Once across the street, I met Bishop Greg coming out of the house towards me. I turned away from the house as he put an assuring arm around my shoulders, and my hastily gathered reserve gave way with equal haste.

“You don’t have to do this, you know. I can…or maybe I can’t imagine…what you must be going through. You can get back on the bus, if you need to. It’s okay,” He assured me.

I looked up hopefully, only to see the bus drive away.

With escape no longer an option, I set my face to stoic and entered the house with the bishop. After crossing the threshold, I stood unmoving – like a wooden Indian – just inside the front door.

Our hostess, a gun holstered at her side, talked about emigrating from California to live in a settlement on the West Bank. Like Bruce had before her, she spoke of the land that her new house was built upon as her ancestral home, the place that both God and the European community (in 1948 and 1967) had promised would be the Jewish homeland.

Zionism is a Jewish nationalist and political movement that supports the reestablishment of a Jewish homeland in the territory defined as ‘the historic Land of Israel.’ Certain evangelical Christian groups see the return of Jews to Palestine as signaling the End Times and the return of the Messiah, so they encourage the occupation as well.

That’s what it really is, an unlawful occupation by an emerging nation – the State of Israel – engaging in the genocide of peoples, the destruction of homes and the appropriation of land and resources. In such instances, religion is just a useful justification of racist crimes against humanity, within a theological cosmology that judges who is among the elect and who is not. In short, it is colonialism.

As Hanan Ashwari (a member of the Palestinian National Council and an Anglican Christian) said in our meeting with her later in our pilgrimage, “The critique is not of a religion but of the actions of a state.”

For me, understanding the political landscape of Israel is like traveling a winding trail of tears through time and history. We see the impact on the land and people of the colonial powers of Britain, modern Europe and the United States, reenacting their own pilgrim history though the emergence of a new Israel.

Ashwari looks to the global community for restraint of Israel and support of Palestine. She gazes intently at the land of her people through the window of war. She still hopes that her colonizers will come to her aid, even as I called out for my bishop to support me. For, make no mistake, he represents the faith of a colonizing power. Yet, I think her hope – and mine – is not misplaced.

Ultimately, we are all on the bus.  We are all seeking our Holy Land.

My greatest fear is that none of us will find it, unless we make the journey together.

Rachel at the Mount of Olives

The Rev. Rachel K. Taber-Hamilton is rector of Trinity Episcopal Church in Everett, WA and is an ordained priest in the Episcopal Diocese of Olympia (Western Washington).  She was the first (known) indigenous person to be ordained in the diocese in 2003.  Born and raised in the United States, Rachel’s heritage includes the First Nations Shackan Indian Band of the Nicola Tribal Association in British Columbia, Canada.

New Zealand Lord’s Prayer – A Prayer for the Week

Leading Spiritually From Within…. the Art of Discernment

What Does Your Soul Long For…. Musings of...

Whole and Reconciled – An Interview with AL...