Learning to See With Noticing Eyes. 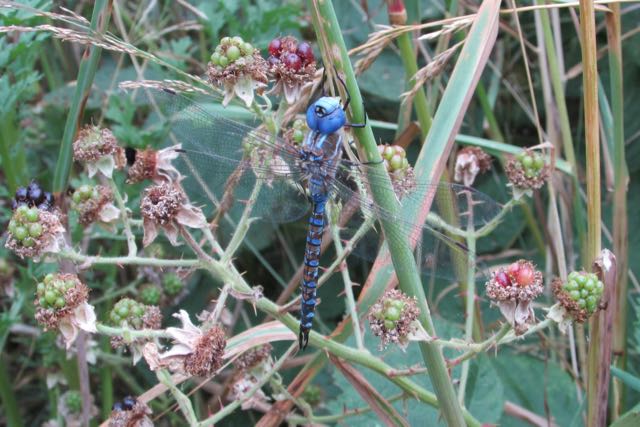 Last Saturday I went out to Camano Island intending to pick cherries, but the birds had beaten me to it. There was not a single cherry left on our trees. It made me angry and frustrated. Not only had I lost control of my day, but what on earth would I do with my time?

Then I remembered last Monday‘s meditation: Rest in the Moment with the reminder to savour the beauty, inhale its fragrance and listen to its music. Time to take notice of my own advice, I thought as I took some deep breaths, started to relax and looked around me with suddenly noticing eyes. There was so much that had eluded me before. In my hunt for cherries I had failed to notice the blackberry bushes already laden with lush berries, the promise of a rich harvest to come. And in the corner grape vines growing rapidly with fruit just forming. By the back door a wild rose with large fragrant blooms.

So my cherry picking became berry picking, and there nestled amongst the brambles was a blue dragonfly, sitting waiting for me to gasp in awe at its beauty. I looked through its translucent wings, to the berries behind, gently moving the stem to get a better look. I have never seen anything so magnificent. God’s creation is translucent, I thought, the glory of God shines through it.

Now in a noticing mood, I headed out front and allowed my attention to be caught by the river stones formed into a French drain. I chose several that I thought would be good for reflecting on and stowed them away in a bag to take home. Food for further thought, I realized as I later placed them on my desk. 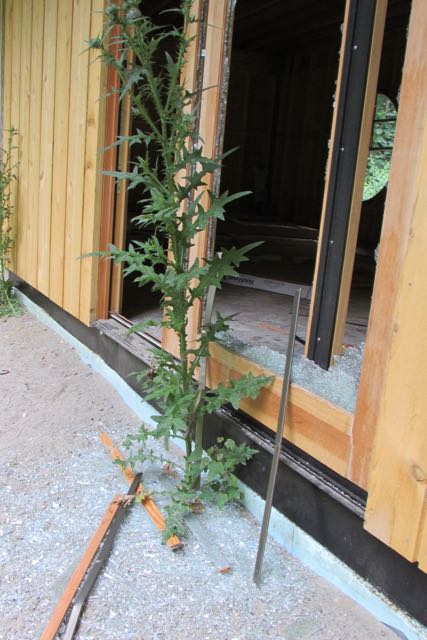 Still in that noticing mood, with my eyes now wide open to God’s nudges, I headed out to the Mustard Seed Village site to evaluate the extent of the vandalism and the amount of work necessary for us to use the building for the upcoming Celtic retreat. A large thistle bush growing up through one pile of broken glass riveted my attention. Thistles, I remembered are often the first plants to grow in poor and polluted soil. They can reach down up to 20 feet to draw up nutrients, breaking down the soil, enriching it, making it healthy so that other plants can thrive. Another symbol of hope for the future I realized.

God keeps giving us hope, yet we can so easily miss the signs if our eyes are not open to notice. At the end of last year’s retreat, some of you may remember, as Andy Wade and I talked about previous acts of vandalism, I walked behind the altar, and there in the grass was a rusty old piece of junk that looked just like a Celtic cross. For me it was a symbol of hope – a sense that God says to us Garbage into gold. I can redeem and make new all that is created.

Hope is in the air. I feel it as I rest in this moment of God’s creating. I experience it as I notice the many reassuring nudges of God’s spirit as we prepare for this year’s Celtic retreat. I am bathed in it, as we move forward slowly into God’s plans for us for the coming months.

What have you noticed today that gives you hope and reassurance?

What has distracted you from noticing God’s signs of hope?

5 Things You Gain When You Lose Control

The Sound of a Wild Snail Eating.

Yes Sarj it was.