Let’s Get Creative With A Singing Bowl 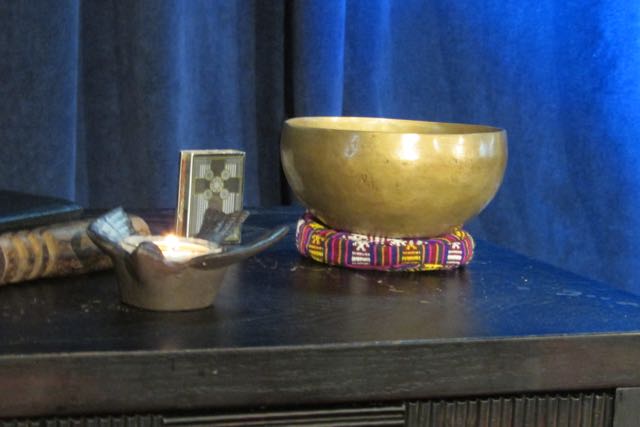 Last week I bought myself a singing bowl and I have been a little like a kid with a new toy ever since. What on earth is that? I hear some of you saying. Oh, Oh now she has really gone off the rails, I hear others comment, that’s a Buddhist thing.

Singing bowls are becoming increasingly popular as a tool in Christian worship. Some use them as a call to worship, either for personal or group prayer, others as a way to calm and centre their spirits and others as a healing tool. The resonance of the singing bowl’s tone really vibrates into my soul and certainly catches my attention with its soothing sound.

In this article, Singing Bowls: A Wordless Call to Worship, the author gives a good look at the history, uses and how to make a bowl sing. I particularly enjoyed this vivid description of use in a service.

the cantor steps away from the mic and stands quietly for a full minute. Then she moves slowly but confidently to the front of the assembly where all can see her. She is joined by another music minister who stands next to her holding a small golden bowl. They wait again there, slowly making eye contact with as many people in the assembly as they can. Then without a word, they both raise their arms in a giant sweep beginning from the side of their legs and slightly forward to just above their shoulders, all the while maintaining eye contact and a gentle smile. The assembly stands. The cantor lowers her arms while the music minister raises the golden bowl higher for the whole assembly to see. In his other hand he holds a short wooden stick. After another thirty seconds of silence, he brings the stick to rest at the side of the bowl in preparation to strike it. He waits another thirty seconds before he strikes the bowl. A pure clean piercing bell tone sounds throughout the room. After a few heart beats, he strikes it again and finally a third time. He slowly lowers the stick as he lets the bowl resonate and the sound drift away. When the tone is almost inaudible, the cantor begins a cappella, “Jesus, remember me, when you come into your kingdom.” The assembly easily picks up the song on the second phrase since it has been their gathering song for all the Sundays of Lent for the last couple years. The choir adds harmonies while a Celtic drum gives a steady downbeat. Every other refrain the golden bowl is struck again on the first down beat, offering its own unique voice to the choir.

Learning to be creative and unafraid to use new tools and techniques is an important part of worship both in our personal and community faith observances. The singing bowl is certainly something worth experimenting with. And if you are already using a singing bowl I would love to hear about the creative ways you use it and how it has enriched your faith.

Here is a helpful youtube video on how to play a singing bowl. I found it very useful.

A Prayer To Welcome the Day

[…] Final week I purchased myself a singing bowl and I’ve been slightly like a child with a brand new toy ever since. What on earth is that? I hear a few of you saying. Oh, Oh now she has actually gone off the rails, I hear others remark, that’s a Buddhist factor. Singing bowls are […] Godspace […]

As a Christian you should stay away from pagan practices. Because, some one uses the word Jesus and in a church it does not mean they are doing right in the eyes of God. The Catholic church was built on all the doctrines, the work of the apostles and the work of the Holy Spirit. It is enough. It does not need any paganism / new age poison. This is only the work of Satan who also comes as a pleasant, angel of light but is a liar. Stay away from such practices. It screams danger. The bowls in Buddhism were meant for opening chakras on the body and it is noted that when all the chakras are open the result is very similiar to evil possession.

Anita I am sorry that you feel this way about singing bowls. Obviously I have a different opinion.

You nailed it on the head. So many Christians fooled by these practices because it “feels” good

Mary I feel you have misunderstood what I am saying. I am advocating using tools like this not discarding them

Is singing bowls anti biblical? Why would you think that.

Gia I don’t think so.

You are so right Christine. They are making spiritual sounds of satan in the
deception of wellbeing.