Prayers, Litanies and History for Ascension Day by Paul Neeley 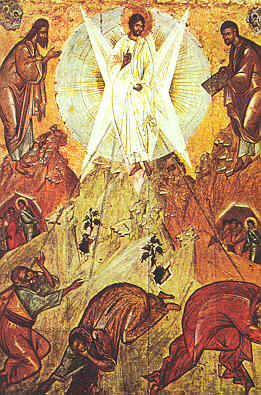 I had not planned to post a new resource list for Ascension Day this year but was made aware of this excellent list that Paul Neeley put together and asked permission to repost it from his blog Global Christian Worship. Paul is an “ethnodoxologist” involved in the study and creation of Christian worship around the world. He teaches at the Robert Webber Institute for Worship Studies and co-founded the International Council of Ethnodoxologists.

The Ascension celebrates the day that Christ, in the presence of His apostles, ascended bodily into Heaven. The Ascension occurred on the 40th day of Easter, so it falls on a Thursday, and thus is often called Ascension Thursday.However, in many churches, the celebration of the Ascension has been transferred to the following Sunday, six weeks after Easter 2015 – so May 17 in 2015.

1. History: Although no documentary evidence of the Feast of the Ascension exists prior to the beginning of the 5th century, St. Augustine says that it is of Apostolic origin, and he speaks of it in a way that shows it was the universal observance of the Church long before his time. Frequent mention of it is made in the writings of St. John Chrysostom, St. Gregory of Nyssa, and in the Constitution of the Apostles.

2. Zac Hicks says we can ask, “Why do we give a special day to that event that seems nothing more than Jesus’ travel plans between earth and heaven?” He then goes on to suggest this symbolic theological reason:

When we think about the rituals associated with atonement and reconciliation between humanity and God, we see this (summarized) pattern:

The cross is obviously the sacrifice.  The resurrection enables the sacrifice’s perpetual, living intercession.  But without the ascension, there is no approach to God.  There is no entry.  The sacrifice (and we along with it) remain outside the Holy of Holies, outside rich, deep union and communion with God.

Put simply, then, ascension-less Christianity is like the priest never walking into the Holy of Holies.  There’s no journey into intimate fellowship with God.  It would be as if the whole sacrificial progression were at a stand-still, because, though the sacrifice were made, no further movement of intercession and mediation were made.  The blood of the sacrifice stays outside, and it doesn’t sprinkle the altar.

In other words, the ascension (and session [Christ’s seating at the right hand of the Father]) helps seal for us what the crucifixion and the resurrection did.  Christ is interceding, pleading His blood, and praying for us in the very presence of God the Father right now and ongoingly because the ascension happened (Heb 7:25).

Although the critical point in Jesus’ ministry comes at the cross, the climatic point, as far as Hebrews is concerned, happens at the ascension. For Hebrews the ascension is the great liturgical moment for humanity. It is the pinnacle of Christ’s redemptive work because a human being enters the heavenly place of God’s presence and sits at his right hand.

4. Another aspect of the Ascension is that it is leads to Christ’s coronation as King of the Universe in specific fulfillment of Daniel 7:13, 14: I saw in the night visions, and, behold, one like the Son of man came with the clouds of heaven, and came to the Ancient of days, and they brought him near before him. And there was given him dominion, and glory, and a kingdom, that all people, nations, and languages, should serve him: his dominion is an everlasting dominion, which shall not pass away, and his kingdom that which shall not be destroyed.

Here are some links to ideas and (non-musical) resources to celebrate the Ascension.

6. Read about a fascinating “visual representation of the Ascension” using kites in an outside service.

7. A service using the teachings of the Heidelberg Catechism on the Ascension of Christ coordinated with Scripture readings and songs.

Ascension day paintings  and the triumphant Christ in Ascension Sadao

God has ascended amid shouts of joy,
the Lord amid the sounding of trumpets.
Sing praises to God, sing praises;
sing praises to our King, sing praises.
For God is the King of all the earth;
sing to him a psalm of praise.
God reigns over the nations;
God is seated on his holy throne.
The nobles of the nations assemble as the people of
the God of Abraham,
for the kings of the earth belong to God;
HE IS GREATLY EXALTED.
—Psalm 47:5-9 (NIV)

11. Lifted Up to Glory and Power: A [lengthy] Dramatic Reading with Four Voices for Ascension Sunday

12. ‘With a Shout,’ a day-long conference held in 2006, explored the meaning of the Ascension – materials are posted online

13. An issue of ‘Worship Notes’ by Ron Man, with an essay, an “Ascension Concordance,” relevant quotes, a model service, and song texts.

14. Bruce Benedict commissioned and published this essay by Mike Farley –Celebrating and Singing the Ascension of Jesus Christ

17. Christine Sine posted a number of helpful links to resources in this blog post

– Ascension Theology by Douglas B. Farrow

–  The Ascension: Humanity in the Presence of God by Jonny Woodrow & Tim Chester

The Prayer for Breathing Out and Breathing In by Steve Wickham